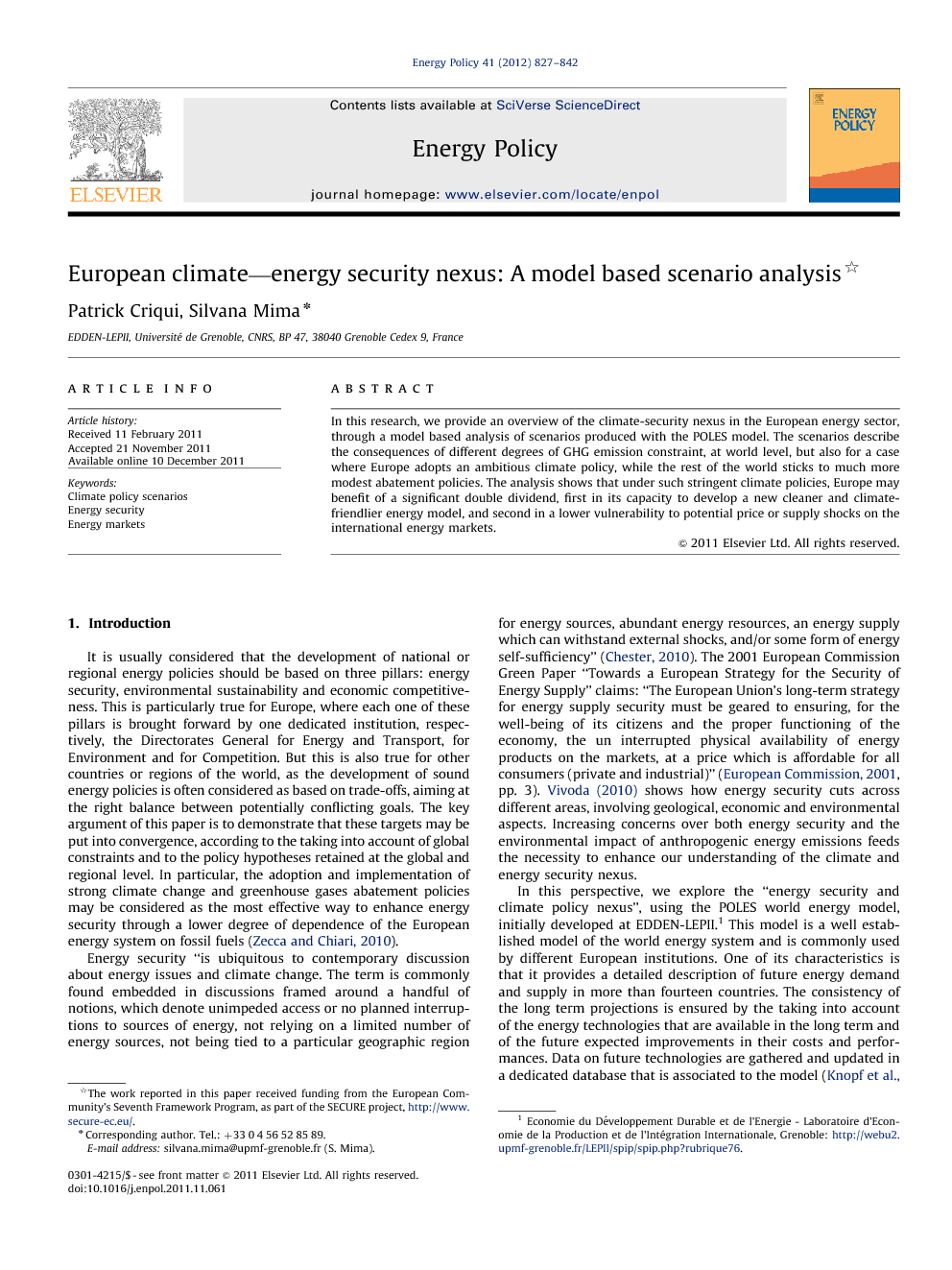 In this research, we provide an overview of the climate-security nexus in the European energy sector, through a model based analysis of scenarios produced with the POLES model. The scenarios describe the consequences of different degrees of GHG emission constraint, at world level, but also for a case where Europe adopts an ambitious climate policy, while the rest of the world sticks to much more modest abatement policies. The analysis shows that under such stringent climate policies, Europe may benefit of a significant double dividend, first in its capacity to develop a new cleaner and climate-friendlier energy model, and second in a lower vulnerability to potential price or supply shocks on the international energy markets.

These long term energy scenarios, illustrate the complex interactions of climate policies and energy security issues. They show in particular that the Muddling Through scenario, with low intensity and non-coordinated climate policy does not represent a really sustainable energy future. This is because of the double constraint that impends on the world energy system: upstream through the limitations in conventional oil and gas availability and downstream, by the limited storage capacity of the atmosphere for GHGs. The carbon price, although it remains low, already changes quite significantly the level of emissions through reduced demand, accelerated development of non-fossil energy sources and some development of Carbon Capture and Storage. But this is not sufficient to meet the emission targets that are considered as desirable in IPCC AR2 in order to limit average temperature increase at level of 2 °C compared to the pre-industrial situation. Moreover, this scenario neither significantly alters the balance of demand or supply on the international energy markets, although it alleviates somewhat the potential tensions. The Global Regime scenario clearly allows a radical change of perspective, by simultaneously reducing GHG emissions and the intensity of tension on international hydrocarbon markets, through lower oil and gas production. This is a potential double dividend situation, probably the most important one to be derived from ambitious climate policies. Finally, the Europe Alone scenario does not meet the climate target as the impacts of ambitious policies in Europe are not sufficient to compensate for the massive global emission increases in the rest of the world. However, in this scenario setting, there is still an element that is strongly beneficial for Europe. While it is supposed in this scenario that other countries adopt a free-riding behavior in climate policies and do not engage in the necessary restructuring, tensions on the oil and gas market would remain high, with risks of repeated shocks in the near- and long-term future. But imposing strong emission reduction domestically results in a thorough restructuring of the European energy system. In that case, Europe would be protected from these external shocks by lower energy demand, higher contribution of domestic non-fossil fuels (renewable and nuclear), and a much lower level of fossil fuel imports. Would this reward of ambitious climate policies fully compensate for the extra costs of the energy system restructuring? This question remains open today. Table 4 intends to illustrate the fundamentals of the risks associated for a country (c) to a negative event (e) and develops the risks in the three archetypal scenarios examined in this study. It comes out of this study that an ambitious policy would bring to Europe a double dividend in its capacity to develop a new energy model − adjusted to sound climate policies − and in the resulting lower vulnerability to potential shocks on the international energy markets. Hence, it appears that it would probably be in the interest of Europe to implement the ambitious policy that is part of the Climate and Energy Package of 2008. Of course, this raises the issue of how to develop cooperative relations with oil- and gas-exporting countries, who on their part may wish to benefit from a certain degree of security of demand. Exchanges and discussions on long-term energy scenarios − however fragile and uncertain these scenarios remain − may help in an improved mutual understanding of the goals that are pursued by both categories of countries in the development of their energy policies. In that way, scenarios can be useful tools to develop a somewhat stabilized framework for the investment decisions that in any case will be necessary to ensure the long-term energy supply of the different world regions.