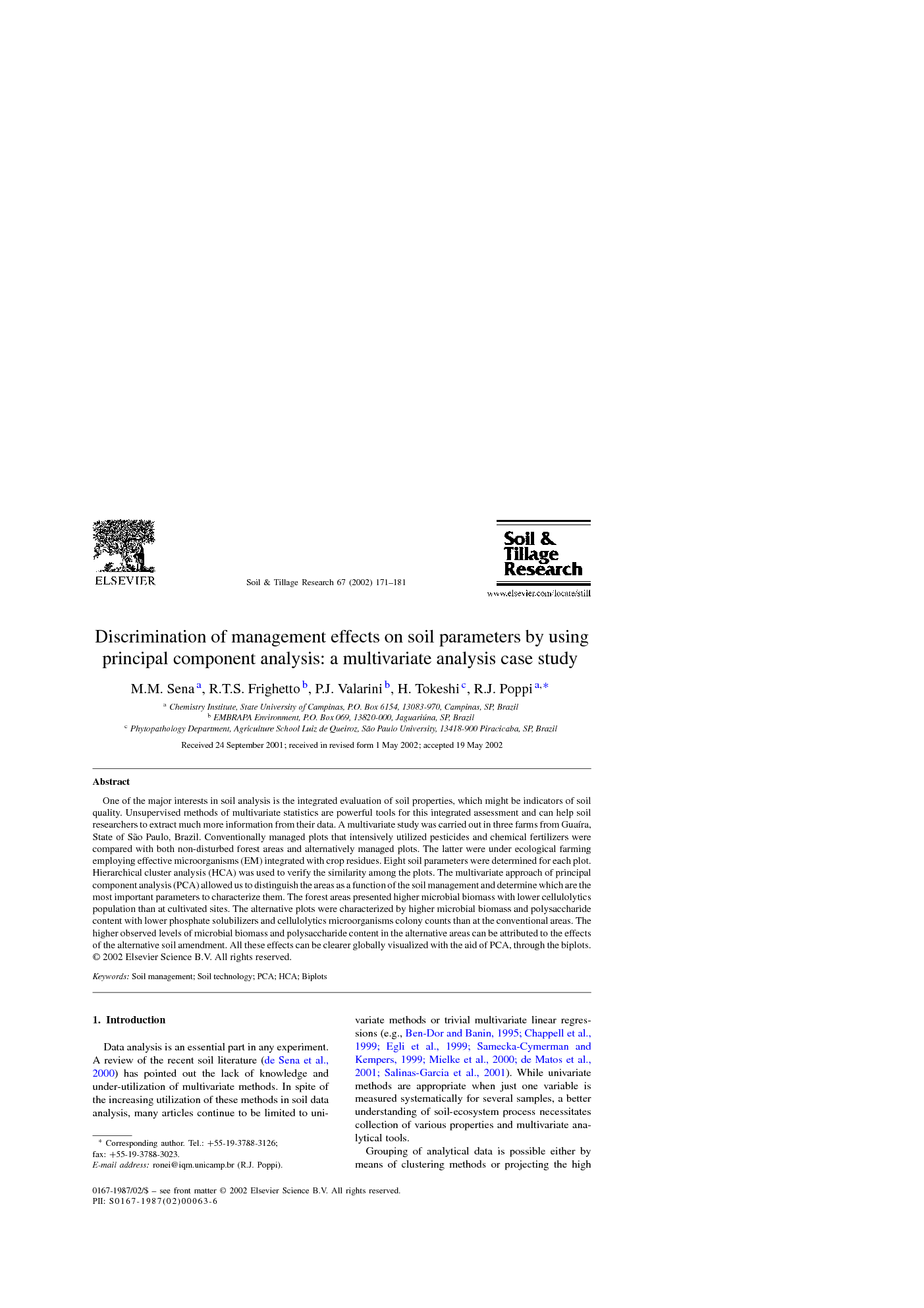 One of the major interests in soil analysis is the integrated evaluation of soil properties, which might be indicators of soil quality. Unsupervised methods of multivariate statistics are powerful tools for this integrated assessment and can help soil researchers to extract much more information from their data. A multivariate study was carried out in three farms from Guaı́ra, State of São Paulo, Brazil. Conventionally managed plots that intensively utilized pesticides and chemical fertilizers were compared with both non-disturbed forest areas and alternatively managed plots. The latter were under ecological farming employing effective microorganisms (EM) integrated with crop residues. Eight soil parameters were determined for each plot. Hierarchical cluster analysis (HCA) was used to verify the similarity among the plots. The multivariate approach of principal component analysis (PCA) allowed us to distinguish the areas as a function of the soil management and determine which are the most important parameters to characterize them. The forest areas presented higher microbial biomass with lower cellulolytics population than at cultivated sites. The alternative plots were characterized by higher microbial biomass and polysaccharide content with lower phosphate solubilizers and cellulolytics microorganisms colony counts than at the conventional areas. The higher observed levels of microbial biomass and polysaccharide content in the alternative areas can be attributed to the effects of the alternative soil amendment. All these effects can be clearer globally visualized with the aid of PCA, through the biplots.

Data analysis is an essential part in any experiment. A review of the recent soil literature (de Sena et al., 2000) has pointed out the lack of knowledge and under-utilization of multivariate methods. In spite of the increasing utilization of these methods in soil data analysis, many articles continue to be limited to univariate methods or trivial multivariate linear regressions (e.g., Ben-Dor and Banin, 1995, Chappell et al., 1999, Egli et al., 1999, Samecka-Cymerman and Kempers, 1999, Mielke et al., 2000, de Matos et al., 2001 and Salinas-Garcia et al., 2001). While univariate methods are appropriate when just one variable is measured systematically for several samples, a better understanding of soil-ecosystem process necessitates collection of various properties and multivariate analytical tools. Grouping of analytical data is possible either by means of clustering methods or projecting the high dimensional data on to lower dimensional space. Since there is no supervisor in the sense of known membership of objects to classes, these methods are performed in an unsupervised manner. Unsupervised methods of multivariate statistics, such as hierarchical cluster analysis (HCA) and principal component analysis (PCA), take into account the correlations among several variables that are simultaneously analyzed, thus allowing the interpretation of better-summarized information. Besides, since these methods do not need prior information given beforehand, no explicit soil information is used. This last facet can sometimes be an advantage, for example, for contaminated soils. Soil research needs a better understanding of all aspects of soil quality. In particular, the development of better indicators of trends in changes that result from different management systems or unintended anthropogenic influences on the soil environment is needed. It is obvious that no isolated property can provide an extensive picture of the quality of a specific soil (Torstensson et al., 1998). Stenberg et al. (1998) have proposed an integrated evaluation of variation in biological, chemical and physical soil properties, utilizing PCA. In spite of its potential as an exploratory method, the applications of PCA found in soil literature have been scarce until the early nineties. Increase in the applications of these methods has only recently been observed, leading to new possibilities for soil researchers. The use of PCA and related methods such as factor analysis (FA) has made possible the resolution of several problems, e.g., determination of management discriminant properties in semiarid soils (Quiroga et al., 1998), identification of sources of soil pollutants (Carlosena et al., 1998), assessment of the tillage impacts on soil quality (Wander and Bollero, 1999), the relation of soil compactibility to physical and organic properties (Ball et al., 2000). Moreover, it is important to mention the methods that deal with higher-dimensional data arrays. The use of three-way PCA allows to simultaneously study several variables of soil samples from several locations as a function of other experimental conditions, such as sampling time, depth and crop rotation (Henrion, 1993). One potential use for PCA is the examination of alternative soil amendment effects on soil chemical and biological properties. Concerns about environmental impacts of chemical or conventional agriculture have led many farmers to seek alternative practices that might make agriculture more sustainable (Reganold et al., 1993). Such farmers use no mineral fertilizers or pesticides, use organic residues to improve soil quality, control pests naturally, rotate crops and adopt other practices aiming at an ecological farming. Practices that favor the maintenance or build-up of soil organic matter, such as addition of plant residues, manure or compost, help to conserve soils by improving many properties and reducing the risk of soil erosion (Karlen et al., 1992). The incorporation of effective microorganisms (EM) with crop and weed residues into agricultural soils is an alternative practice of increasing interest (Higa, 1996, Senanayake, 1996, Daly and Stewart, 1999 and Hussain et al., 1999). The use of EM combined with other ecological agriculture practices are expected to improve the physical, chemical, and biological parameters and increase soil stability. In addition, ecological farming is expected to increase the biological and landscape diversity (Mander et al., 1999). The purpose of this study was to evaluate the effects of different management practices on soil quality using unsupervised methods of multivariate statistics. Alternative systems under ecological farming, using EM and crop residues, were compared with both non-disturbed forest areas and conventional systems, the latter intensively utilizing pesticides and chemical fertilizers. The similarity among areas was observed by using HCA. The visualization of the scores and loadings from PCA, through the biplots, was necessary to obtain a clear and complete picture of the systems behavior. The PCA application attempted to answer two questions: (1) is it possible to distinguish the soil management among alternative systems, conventional systems and native forest through the integrated evaluation of eight relevant parameters? (2) which among these parameters are the most important for this discrimination?

This manuscript demonstrated the use of unsupervised methods of multivariate statistics to extract information in soil research using a Brazilian case study. It was possible to discriminate farm plots as a function of the soil management through the integrated evaluation of some relevant parameters. The use of PCA allowed us to answer the two questions formulated in Section 1. The obtained biplots provided a clear and complete picture of the influence of the variables on the areas. The major part of data information (PC1, 52–77%) was responsible for forest characterization (higher microbial biomass, lower cellulolytics microorganisms colony counts than at cultivated plots). The discrimination between alternative (higher microbial biomass and polysaccharides) and conventional (higher cellulolytics and solubilizers microorganisms colony counts) plots was possible through the observation of a smaller part of the total data variance (PC2, 17.5–37% in 1997). These results can be considered remarkable because, although the forest characterization was expected, the observed soil management discrimination was not so expected, since so few (2) years of alternative management could not be enough to find clear changes in soil parameters. The higher observed levels of microbial biomass and polysaccharide content in the alternative areas can be attributed to the effects of the alternative soil amendments, such as EM and organic fertilizers, and the absence of pesticides and chemical fertilizers. An important aspect to mention is that this methodology was carried out without any prior explicit soil information and that no guidance from other sources was available. A similar procedure could be applied in cases such that, the identification of sources of contamination in polluted soils, the study of the tillage impacts on soil quality, the classification of soils of different origins and the identification of sources of soil degradation. In all these cases, biological, biochemical, chemical and physical parameter can be utilized. If the source patterns of information present in soil data are previously available, the posterior use of rotations and target-transformations could be recommended. Finally, this application involved a relatively small number of objects and variables. When analyzing larger soil data sets, the suitability of PCA and biplots will be even more evident. It is our claim that soil researchers need to know better the multivariate methods, which as compared to univariate and bivariate methods, largely enhance the capacity of extraction and interpretation of data information from soil analysis.