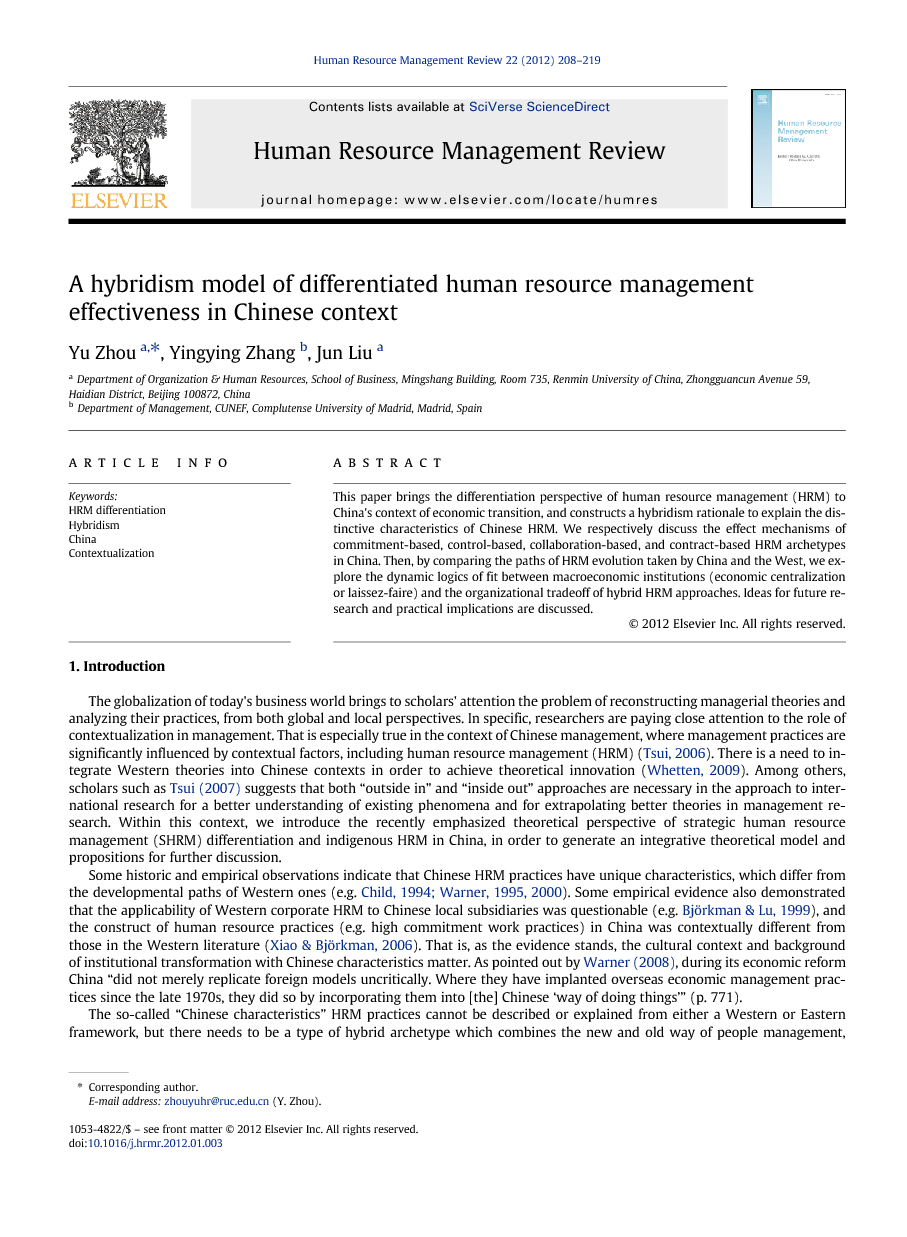 This paper brings the differentiation perspective of human resource management (HRM) to China's context of economic transition, and constructs a hybridism rationale to explain the distinctive characteristics of Chinese HRM. We respectively discuss the effect mechanisms of commitment-based, control-based, collaboration-based, and contract-based HRM archetypes in China. Then, by comparing the paths of HRM evolution taken by China and the West, we explore the dynamic logics of fit between macroeconomic institutions (economic centralization or laissez-faire) and the organizational tradeoff of hybrid HRM approaches. Ideas for future research and practical implications are discussed.

The globalization of today's business world brings to scholars' attention the problem of reconstructing managerial theories and analyzing their practices, from both global and local perspectives. In specific, researchers are paying close attention to the role of contextualization in management. That is especially true in the context of Chinese management, where management practices are significantly influenced by contextual factors, including human resource management (HRM) (Tsui, 2006). There is a need to integrate Western theories into Chinese contexts in order to achieve theoretical innovation (Whetten, 2009). Among others, scholars such as Tsui (2007) suggests that both “outside in” and “inside out” approaches are necessary in the approach to international research for a better understanding of existing phenomena and for extrapolating better theories in management research. Within this context, we introduce the recently emphasized theoretical perspective of strategic human resource management (SHRM) differentiation and indigenous HRM in China, in order to generate an integrative theoretical model and propositions for further discussion. Some historic and empirical observations indicate that Chinese HRM practices have unique characteristics, which differ from the developmental paths of Western ones (e.g. Child, 1994, Warner, 1995 and Warner, 2000). Some empirical evidence also demonstrated that the applicability of Western corporate HRM to Chinese local subsidiaries was questionable (e.g. Björkman & Lu, 1999), and the construct of human resource practices (e.g. high commitment work practices) in China was contextually different from those in the Western literature (Xiao & Björkman, 2006). That is, as the evidence stands, the cultural context and background of institutional transformation with Chinese characteristics matter. As pointed out by Warner (2008), during its economic reform China “did not merely replicate foreign models uncritically. Where they have implanted overseas economic management practices since the late 1970s, they did so by incorporating them into [the] Chinese ‘way of doing things’” (p. 771). The so-called “Chinese characteristics” HRM practices cannot be described or explained from either a Western or Eastern framework, but there needs to be a type of hybrid archetype which combines the new and old way of people management, merging the Western with Chinese HRM practices (Warner, 2008 and Zhou and Zeng, 2008). Based on this idea, the present paper attempts to provide a differentiation perspective of the SHRM explanation for the coexistence of hybrid HRM systems in China. Specifically, we contribute by pinpointing the particular mechanisms through which diverse HRM configurations comprehensively affect firms' competitive advantages. The paper is structured as follows: First, we present an HRM differentiation perspective to challenge the best practice view of SHRM by tracking the recent arguments for alignments between HRM and strategic capabilities (Becker and Huselid, 2006 and Zhou and Hong, 2008). Second, by reviewing empirical and theoretical studies on HRM effectiveness based on the evidence from both the West and China, we propose a hybrid rationale to indicate the distinctive characteristics of Chinese HRM; then we specifically show the mechanisms of four typical HRM archetypes' (commitment-based, control-based, collaboration-based, and contract-based HRM) effects on an organization's divergent outcomes in China. Third, by comparing the different evolutionary paths of HRM practices between the West and China, we explore the contingent logic between macro-level economic institutions and organizational-level HRM alternatives. Lastly, implications are drawn for both theoretical development and practical improvement.

Our arguments provide several insights regarding appropriate applications of hybrid HRM archetypes in China. Within a limited budget, rational organizational investments in human capital are disproportionate (Huselid, Beatty, & Becker, 2005). This requires that practitioners exploit differentiated HRM packages across various human capitals rather than take an approach of uniformity. We primarily suggest that professionals should understand the unique effect mechanisms and application conditions of each HRM model so as to exploit their advantages and avoid disadvantages contextually. For example, although high commitment work practices have been admired by the superior companies in West (Pfeffer, 1998), in Chinese organizations it may be necessary to shrink the extravagant employment commitment inherited from the past planned economy. Moreover, the economic and social transitions in China increase the managerial complexity of hybrid HRM. With a rapid economic growth, social contradictions including labor–management conflicts have become acute in China. Adoption of HRM hybridism may sensitively cause a potential injustice issue: the differentiated personnel treatments will be challenged by creating disparity and discrimination at the workplace (Zhou & Hong, 2008). Recently, the Chinese government strengthened the legal system to regulate labor relations. Several national-level laws regarding labor contracts, employment promotion, and mediation and arbitration of labor disputes have continuously come into effect in 2008. These provide a series of legitimate bottom lines for ensuring basic equity in divergent employment relations; meanwhile, they require HR professionals to legitimize their accountabilities. Additionally, as Kochan (2007) advocated, beyond building proficiency in diverse HR techniques, HR professionals should actively take responsibility for maintaining legitimacy, justice, and harmony in the workplace so as to promote the effectiveness of HRM on both economic and social outcomes.