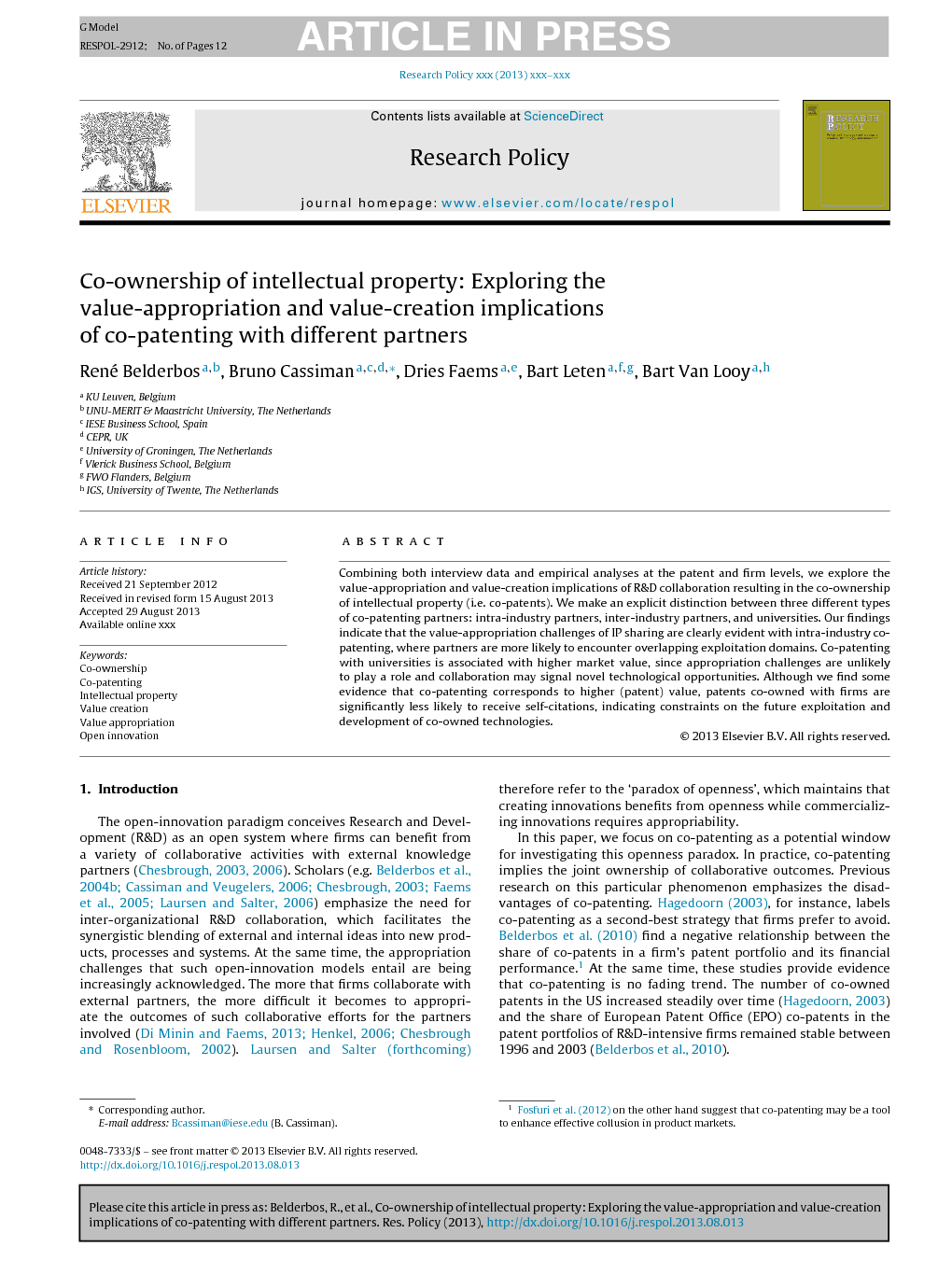 Combining both interview data and empirical analyses at the patent and firm levels, we explore the value-appropriation and value-creation implications of R&D collaboration resulting in the co-ownership of intellectual property (i.e. co-patents). We make an explicit distinction between three different types of co-patenting partners: intra-industry partners, inter-industry partners, and universities. Our findings indicate that the value-appropriation challenges of IP sharing are clearly evident with intra-industry co-patenting, where partners are more likely to encounter overlapping exploitation domains. Co-patenting with universities is associated with higher market value, since appropriation challenges are unlikely to play a role and collaboration may signal novel technological opportunities. Although we find some evidence that co-patenting corresponds to higher (patent) value, patents co-owned with firms are significantly less likely to receive self-citations, indicating constraints on the future exploitation and development of co-owned technologies.

The open-innovation paradigm conceives Research and Development (R&D) as an open system where firms can benefit from a variety of collaborative activities with external knowledge partners (Chesbrough, 2003 and Chesbrough, 2006). Scholars (e.g. Belderbos et al., 2004b, Cassiman and Veugelers, 2006, Chesbrough, 2003, Faems et al., 2005 and Laursen and Salter, 2006) emphasize the need for inter-organizational R&D collaboration, which facilitates the synergistic blending of external and internal ideas into new products, processes and systems. At the same time, the appropriation challenges that such open-innovation models entail are being increasingly acknowledged. The more that firms collaborate with external partners, the more difficult it becomes to appropriate the outcomes of such collaborative efforts for the partners involved (Di Minin and Faems, 2013, Henkel, 2006 and Chesbrough and Rosenbloom, 2002). Laursen and Salter (forthcoming) therefore refer to the ‘paradox of openness’, which maintains that creating innovations benefits from openness while commercializing innovations requires appropriability. In this paper, we focus on co-patenting as a potential window for investigating this openness paradox. In practice, co-patenting implies the joint ownership of collaborative outcomes. Previous research on this particular phenomenon emphasizes the disadvantages of co-patenting. Hagedoorn (2003), for instance, labels co-patenting as a second-best strategy that firms prefer to avoid. Belderbos et al. (2010) find a negative relationship between the share of co-patents in a firm's patent portfolio and its financial performance.1 At the same time, these studies provide evidence that co-patenting is no fading trend. The number of co-owned patents in the US increased steadily over time (Hagedoorn, 2003) and the share of European Patent Office (EPO) co-patents in the patent portfolios of R&D-intensive firms remained stable between 1996 and 2003 (Belderbos et al., 2010). In sum, whereas studies stress the disadvantages of co-patenting, we duly note that co-ownership of intellectual property (IP) remains an empirically relevant strategy for companies developing technology jointly. The purpose of this paper is to explore the role and performance implications of co-patenting in the setting of collaborative R&D activities. In particular, we focus on the potentially different implications of co-patenting with different types of collaborative partner, distinguishing between intra-industry, inter-industry and university partners. We proceed in two steps. First, in order to explore the advantages and disadvantages of IP sharing in collaborative R&D activities, we utilize interviews with 10 IP managers from large organizations engaged in R&D collaboration and co-patenting on an international level. In general, these interviews confirm that co-ownership of IP may indeed restrict firms’ ability to fully appropriate the market potential of knowledge derived from collaborative R&D. At the same time, they suggest that the value-appropriation challenges of co-patents heavily depend on the type of partner involved in the collaborative activities. Finally, our interview findings suggest that ex-ante negotiations on co-patenting arrangements may have a beneficial impact on the value-creation dynamics in collaborative R&D. In the second step of our study, we rely on panel data from 164 European, US, and Japanese firms to test some of the insights that emerged from our interviews. Our quantitative analyses show a significantly negative relationship between the share of co-patents with intra-industry partners and the firm's performance–which we measure as market value (Tobin's q). Co-patenting with universities is positively related to market value. At the patent level, we observe that co-patents on average tend to receive more patent citations. More detailed analyses reveal a strong negative partial correlation between co-patenting with firm partners and the self-citations of focal firms, whereas a positive correlation is observed between co-patenting and firms’ other citations. Together, these results suggest that, although co-owned technologies may be associated with greater value creation, individual firms may face liabilities in appropriating returns from these technologies and in deploying them in their subsequent R&D and patenting efforts. These liabilities are most pronounced in intra-industry partnerships where a high probability of overlapping exploitation domains for co-owned technologies is present. Our results are consistent with the view that appropriation issues play a more limited role in inter-industry partnerships – where exploitation domains are more likely to differ – and in partnerships with universities, which are less likely to actively engage in (competing) commercialization trajectories. Jointly, these findings provide a nuanced perspective on the role of co-patents in addressing the openness paradox in collaborative R&D activities. At the same time, we identify important avenues for future research on joint IP ownership in open-innovation settings, emphasizing the need to further explore both the value-appropriation and value-creation implications of collaborative IP arrangements. In the next section, we turn to existing literature and our interviews to explore the role and performance implications of co-patenting. Our data and methods are discussed in Section 3. Empirical results are presented in Section 4 followed by a discussion in Section 5.

Engaging in open-innovation efforts not only triggers opportunities for value creation but also presents substantial challenges in seeking to appropriate this value. In this paper, we explored the role of joint patent ownership in addressing this ‘openness paradox.’ We believe that our findings will inspire academic scholars to further examine the value-appropriation liabilities as well as the value-creation opportunities of co-patenting and collaboration arrangements. In addition, we trust that our insights will help practitioners to further optimize their collaborative IP strategies with different types of partner.