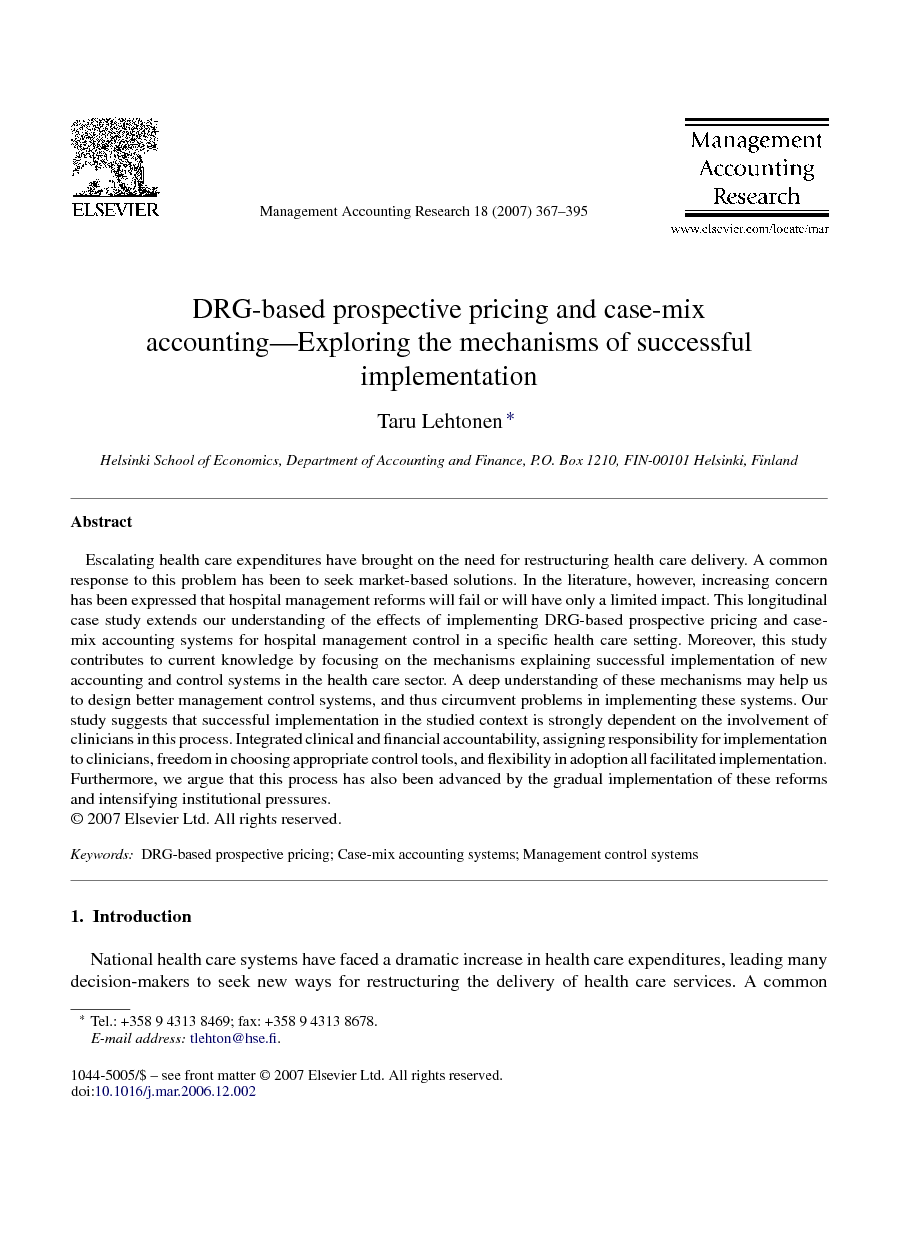 Escalating health care expenditures have brought on the need for restructuring health care delivery. A common response to this problem has been to seek market-based solutions. In the literature, however, increasing concern has been expressed that hospital management reforms will fail or will have only a limited impact. This longitudinal case study extends our understanding of the effects of implementing DRG-based prospective pricing and case-mix accounting systems for hospital management control in a specific health care setting. Moreover, this study contributes to current knowledge by focusing on the mechanisms explaining successful implementation of new accounting and control systems in the health care sector. A deep understanding of these mechanisms may help us to design better management control systems, and thus circumvent problems in implementing these systems. Our study suggests that successful implementation in the studied context is strongly dependent on the involvement of clinicians in this process. Integrated clinical and financial accountability, assigning responsibility for implementation to clinicians, freedom in choosing appropriate control tools, and flexibility in adoption all facilitated implementation. Furthermore, we argue that this process has also been advanced by the gradual implementation of these reforms and intensifying institutional pressures.

In the literature, it has been suggested that the DRG-based prospective pricing and case-mix accounting systems could contribute to the management of hospitals (eg., Fetter and Freeman, 1986 and Fetter, 1987). However, few studies have examined this topic empirically at a micro level, and the reported experiences have not always favoured the implementation of these systems. Moreover, these studies have devoted much attention to describing resistance and possible harmful side-effects (Weiner et al., 1987, Doolin, 1999, Lowe and Doolin, 1999 and Pettersen, 1999). This longitudinal case study extends our understanding concerning the effects of implementing DRG-based prospective pricing and case-mix accounting systems on the management control of a hospital in a specific health care setting. The study also contributes to current knowledge by focusing on the mechanisms explaining successful implementation of new accounting and control systems in the health care sector. A deep understanding of these mechanisms can help us to design better management control systems for the health care sector and circumvent problems in their implementation. This study demonstrates that DRG-based prospective pricing and case-mix accounting systems can be successfully implemented, and that the intended effects can, for the most part, be achieved. In this particular context, it seems that municipalities have become better able to predict their health care costs. Some municipalities have even been able to compare different service providers, thereby gaining more control over the costs of specialized health care. In addition, health care professionals appear to have become cost-conscious and increasingly aware of their limited financial resources. They seemed to act in line with the expectations of the DRG control framework: there was evidence that the use of intermediate services became controlled and attempts were made to rationalize operating activities in order to become more cost-efficient. However, the role of DRG-based prospective pricing and case-mix accounting systems is not as clear cut in this control process. The relevance, applicability and use of the information provided by these systems seemed to vary between organizational levels and between individuals. At the central management level, this information was found more valuable and was more frequently used. At the lower levels of the management hierarchy, the views regarding the relevance and applicability of this patient-based revenue and cost information varied more between situations and individuals: in general, it seemed to have more potential for control purposes at the profit centre and speciality levels, but less at the departmental level. We believe that these findings can be explained by the differences in tasks and assigned accountabilities. There was also evidence of other control systems in use, and that DRG-based information was used in a complementary fashion with the information provided by these other control systems. Nonetheless, in the studied context, we witnessed no decoupling phenomenon (cf. Weiner et al., 1987 and Pettersen, 2001; see also Covaleski et al., 1993), as accounting and DRG-based information seemed to have penetrated deep into the organization. In the literature, it has been suggested that health care management reforms fail due to conflicts between health care professionals and hospital management (Doolin, 1999, Abernethy and Stoelwinder, 1995 and Weiner et al., 1987). We argue that the key to successful implementation is an ability to persuade clinicians to become centrally involved in the management and the development of the control systems. We argue that integrating clinical and financial accountability, and assigning responsibility for the implementation to clinicians have served this purpose in our case study context. Moreover, the freedom of choice and flexibility in adoption seem to have alleviated conflicts and settled disputes, and thereby enhanced the co-operation of clinicians. Furthermore, we believe that the gradual implementation of these reforms and the intensifying institutional pressures have also fostered the adoption and implementation of DRG-based accounting systems, though they were not sufficient alone to explain the decision to implement, nor the success of this implementation. In this study, we have focused on one specific management control system, the DRG control framework, and examined whether this system has fulfilled the expectations set for it from the point of view of the management of the case study organization. However, it is recognized that management control is exercised simultaneously through many different formal and informal control systems. In addition to the DRG control framework, we observed a number of other control systems in the case organization, and there seemed to be differences in their use between organizational levels. Thus, we believe that future research would benefit from broadening the scope, and focusing on the roles and interrelationships of various control systems in the control package. This is important because we believe that sometimes the desired outcome could be achieved by substituting control systems, while other occasions may require that the control systems be used in a reinforcing way.