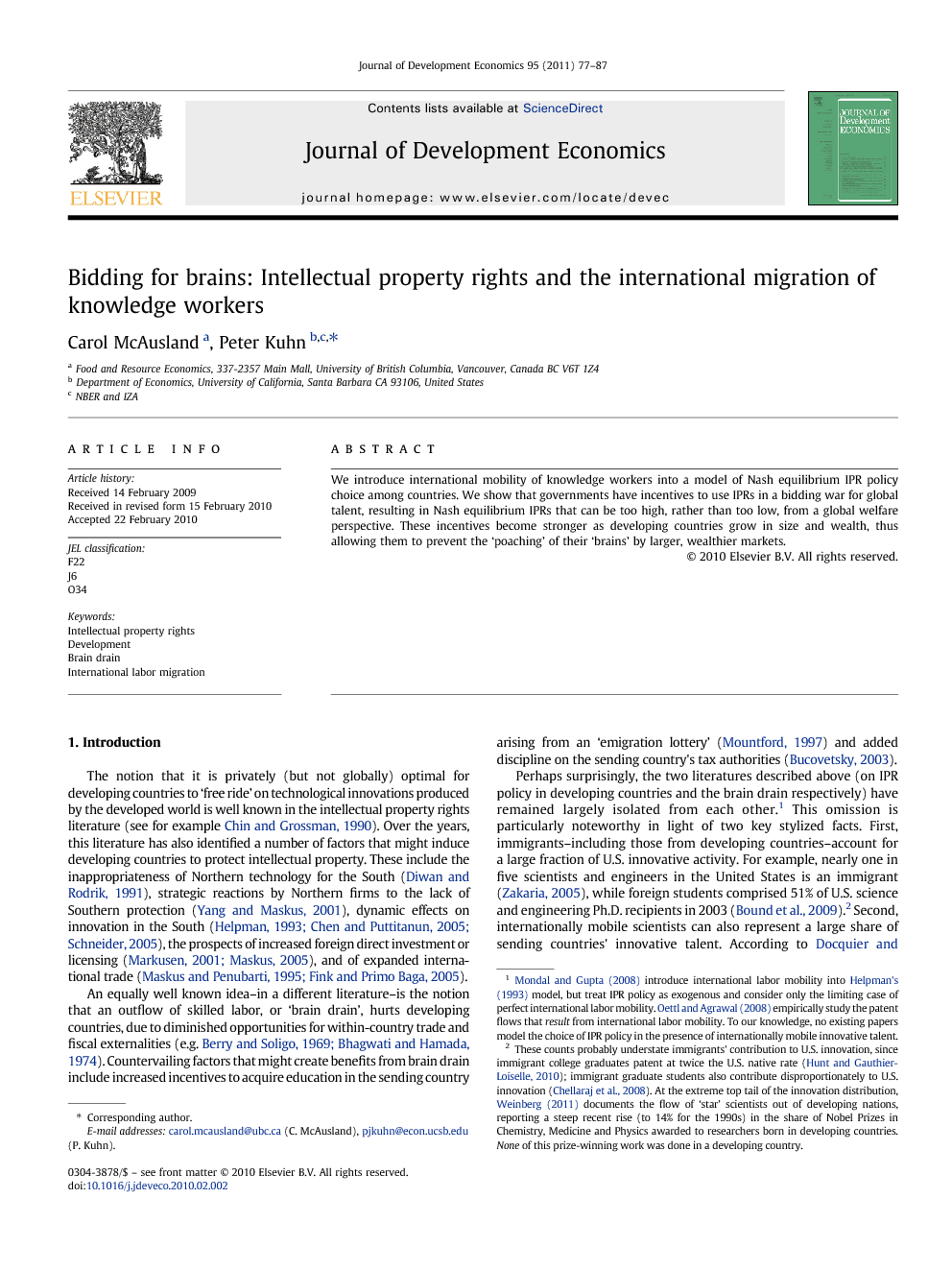 We introduce international mobility of knowledge workers into a model of Nash equilibrium IPR policy choice among countries. We show that governments have incentives to use IPRs in a bidding war for global talent, resulting in Nash equilibrium IPRs that can be too high, rather than too low, from a global welfare perspective. These incentives become stronger as developing countries grow in size and wealth, thus allowing them to prevent the ‘poaching’ of their ‘brains’ by larger, wealthier markets.

The notion that it is privately (but not globally) optimal for developing countries to ‘free ride’ on technological innovations produced by the developed world is well known in the intellectual property rights literature (see for example Chin and Grossman, 1990). Over the years, this literature has also identified a number of factors that might induce developing countries to protect intellectual property. These include the inappropriateness of Northern technology for the South (Diwan and Rodrik, 1991), strategic reactions by Northern firms to the lack of Southern protection (Yang and Maskus, 2001), dynamic effects on innovation in the South (Helpman, 1993, Chen and Puttitanun, 2005 and Schneider, 2005), the prospects of increased foreign direct investment or licensing (Markusen, 2001 and Maskus, 2005), and of expanded international trade (Maskus and Penubarti, 1995 and Fink and Primo Baga, 2005). An equally well known idea–in a different literature–is the notion that an outflow of skilled labor, or ‘brain drain’, hurts developing countries, due to diminished opportunities for within-country trade and fiscal externalities (e.g. Berry and Soligo, 1969 and Bhagwati and Hamada, 1974). Countervailing factors that might create benefits from brain drain include increased incentives to acquire education in the sending country arising from an ‘emigration lottery’ (Mountford, 1997) and added discipline on the sending country's tax authorities (Bucovetsky, 2003). Perhaps surprisingly, the two literatures described above (on IPR policy in developing countries and the brain drain respectively) have remained largely isolated from each other.1 This omission is particularly noteworthy in light of two key stylized facts. First, immigrants–including those from developing countries–account for a large fraction of U.S. innovative activity. For example, nearly one in five scientists and engineers in the United States is an immigrant (Zakaria, 2005), while foreign students comprised 51% of U.S. science and engineering Ph.D. recipients in 2003 (Bound et al., 2009).2 Second, internationally mobile scientists can also represent a large share of sending countries' innovative talent. According to Docquier and Rapoport (2009), these flows are particularly high for countries that are both poor and relatively small, such as Guyana, Haiti, and Kenya: In 2000, 89, 84, and 47% of these countries' university-educated natives were living in developed (OECD) countries. The goal of this paper is to study the interactions between IPR policy and brain drain. We do so by considering an IPR policy game between countries in a context where workers who produce intellectual property are internationally mobile (at a cost), and where innovations display some country-specificity in their usefulness or appeal. We offer two main contributions. The first is to identify some hitherto unrecognized factors affecting any country's (privately) optimal IPR policy, and the consequences of these factors for global efficiency. One such factor is what we term the bidding-for-brains effect. Unless innovations are truly universal, governments have an incentive to manipulate local policy to attract footloose innovators. In sharp contrast to the well known “free riding” effect, bidding for brains induces countries to overprotect intellectual property, as an outcome of a global bidding war for innovative talent. We also identify an “expatriate brains” effect. When part (or all) of a country's intellectual workforce has departed to another country, the brain-sending country's incentives to protect intellectual property may be weakened, because the marginal innovations produced by those innovators are less relevant to the Source country when produced abroad. Thus, the ‘South's’ incentives to set low IPRs may both be intensified and, in part explained by the fact that many of the South's brains live in the North. Our paper's second main contribution is to identify conditions in which each of the two above effects is likely to be important. We show that the expatriate brains effect tends to dominate when developing countries are small or poor: such countries have no hope of contesting the outflow of their brains via strong protection of intellectual property and instead, as predicted by the traditional IPR literature, are likely to choose zero protection in a Nash policy equilibrium. The bidding-war effect is more likely to dominate as developing countries grow in prosperity and innovative capacity to a point where their IP laws are capable of having a quantitatively significant effect on the outflows of their brains. In fact, as the South grows, we show that its Nash equilibrium IPR policy can rise from zero to levels similar to the North's, and that at this equilibrium, both countries overprotect intellectual property relative to globally efficient levels. We therefore speculate that continued development in countries like China and India might one day replace the debate over intellectual ‘free-riding’ by those countries with one about excessive IPR protection in a global bidding war for the world's top scientists, engineers and artists.3

Existing models of two key policy issues affecting developing countries–intellectual property protection and brain drain–have so far treated these issues largely in isolation from each other. We study the interactions between these issues by introducing (costly) international mobility of knowledge workers into a model of Nash equilibrium IPR policy choice among countries. Our analysis identifies a number of considerations affecting optimal IPR policy that have not, to our knowledge, been noted before. One of these is a bidding-for-brains effect, which–in contrast to existing IPR models–can generate excessive IPR protection in both sending and receiving countries, as both countries attempt to outbid each other in providing a hospitable IPR environment for internationally mobile knowledge workers. We conjecture that this effect may become empirically relevant as some developing nations begin to contest the developed world's attraction for their knowledge workers. In addition, we also identify an expatriate brains effect, which–like the well known ‘free-riding’ effect–can give both brain-receiving and- sending countries incentives to underprotect IPRs relative to the global optimum. Receiving countries will underprotect to the extent that they not do fully value the welfare of immigrant brains living in their country; sending countries can underprotect because the innovations produced by their own emigrants are less appropriate to the needs of sending-country consumers than innovations produced locally. Indeed we point out that one reason why developing countries might prefer little or no IPR protection may be because their knowledge workers have already departed to serve larger, richer markets, where those workers produce ideas and goods that may no longer be valued by developing country consumers.