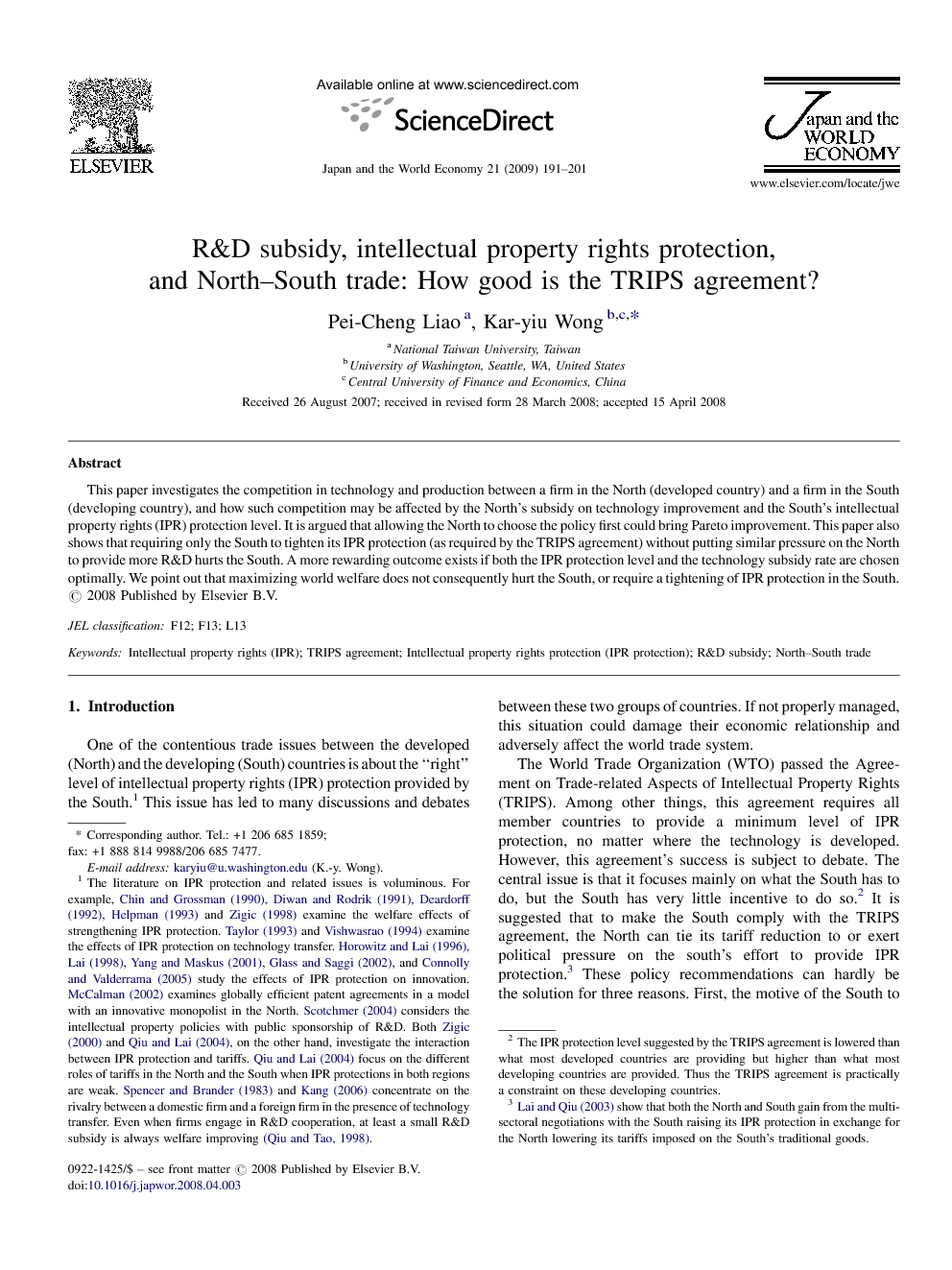 This paper investigates the competition in technology and production between a firm in the North (developed country) and a firm in the South (developing country), and how such competition may be affected by the North’s subsidy on technology improvement and the South’s intellectual property rights (IPR) protection level. It is argued that allowing the North to choose the policy first could bring Pareto improvement. This paper also shows that requiring only the South to tighten its IPR protection (as required by the TRIPS agreement) without putting similar pressure on the North to provide more R&D hurts the South. A more rewarding outcome exists if both the IPR protection level and the technology subsidy rate are chosen optimally. We point out that maximizing world welfare does not consequently hurt the South, or require a tightening of IPR protection in the South.

One of the contentious trade issues between the developed (North) and the developing (South) countries is about the “right” level of intellectual property rights (IPR) protection provided by the South.1 This issue has led to many discussions and debates between these two groups of countries. If not properly managed, this situation could damage their economic relationship and adversely affect the world trade system. The World Trade Organization (WTO) passed the Agreement on Trade-related Aspects of Intellectual Property Rights (TRIPS). Among other things, this agreement requires all member countries to provide a minimum level of IPR protection, no matter where the technology is developed. However, this agreement’s success is subject to debate. The central issue is that it focuses mainly on what the South has to do, but the South has very little incentive to do so.2 It is suggested that to make the South comply with the TRIPS agreement, the North can tie its tariff reduction to or exert political pressure on the south’s effort to provide IPR protection.3 These policy recommendations can hardly be the solution for three reasons. First, the motive of the South to comply with the TRIPS agreement is not so much tariff reductions as the avoidance of tariff increases, which the North can legally impose if the South is found by the WTO to have violated the TRIPS agreement. Second, the South is motivated to accept the TRIPS agreement as part of the WTO due to the promise of liberalization in the area where the North’s protection remains high (e.g., textiles and apparel).4 Third, political pressure can easily lead to unilateral action by the North and unilateralism is rarely the solution to trade disputes in the world. On the other hand, there have been questions as to whether the TRIPS agreement is helping to solve the problem or making the problem worse. One of the functions of the WTO is to provide a place for member governments to negotiate trade agreements and to settle trade disputes; whatever the WTO does will have an impact on the economic development and the welfare of the negotiating parties. From this premise we can raise several questions: (a) How will the TRIPS agreement affect the world’s welfare? (b) Does an improvement in the world’s welfare necessarily require an increase in the IPR protection provided by the South? (c) Are there things the North can do to induce the South to provide tighter IPR protection and at the same time improve the world’s welfare? (d) Can an improvement in South’s IPR protection be Pareto improvement? (e) What is the optimal policy for the world’s welfare, i.e., what should the South and the North both do to maximize the world’s welfare? The objective of this paper is to provide a simple model to analyze the related issues and to suggest some alternative solutions. Using a simple model, we found that the answers are far from trivia. First, we argue that the TRIPS agreement, in its present setting, does not necessarily improve the welfare of the world. Second, an improvement in the world’s welfare could require a drop in the IPR protection provided by the South. Third, there are things the North can do to induce the South to provide more IPR protection, without exerting political pressure or quid pro quo trade policies. Fourth, there do exist cases in which an increase in the South’s IPR represents a Pareto improvement. Fifth, this paper argues that to maximize the world’s welfare, both the South and the North should be required to choose the appropriate policies. One key feature in the present model is that the North is choosing an appropriate R&D subsidy. That innovation in the North could generate externality is well recognized in the literature; for example, Lai and Qiu (2003) and Grossman and Lai, 2004 and Grossman and Lai, 2006. However, not too many papers analyze explicitly the optimal R&D subsidy of the North in a competition game between the North and the South. Lin (2002) is an exception, but he assumes that the IPR protection chosen by the South is exogenously given. The main contribution of our paper is to analyze the rivalry between the North and the South by considering cases in which the R&D subsidy and the IPR protection are chosen either simultaneously or sequentially to maximize either an individual country’s welfare or the world’s welfare. The remainder of the paper is organized as follows: Section 2 provides the features and assumptions of the model. Section 3 describes a game in which both governments choose their policy parameters simultaneously. The optimal production levels and the optimal R&D activities are derived. In Section 4, the optimal subsidy rate and the optimal IPR protection are derived. The Stick case and the Carrot case are explained. Section 5 examines the case in which the North is able to choose a credible subsidy first before the South picks its IPR protection. Section 6 considers the level of IPR protection that maximizes the world’s welfare. Two cases are explained: the one in which the North chooses its own subsidy rate, and the one in which both the IPR protection level and the subsidy rate are chosen to maximize the world welfare. The last section concludes.

In this paper, we examined the strategic behavior of a developed country (North) and a developing country (South) concerning technology development, cross-country technology spillover, and competition between firms in the countries. The South and its own firm can free ride the technology improvement developed in the North. Since such technology spillover helps improve the technology and competitive edge of the firm in the South, the South government in general has little incentive to protect intellectual property rights. However, as this paper argues, if the level of IPR protection can affect the level of technology chosen by the firm in the North, the South may want to choose a tighter IPR protection in order to induce the North firm to choose greater technology improvement. The North, on the other hand, has an incentive to provide a subsidy for its own firm on R&D activities to correct the externality created. The amount of the subsidy provided for the firm will depend on, among other things, the level of IPR protection announced by the government in the South. This paper analyzes several games in which the North and the South compete in terms of technology subsidy and IPR protection. The basic game is the one in which both of them choose their optimal policies at the same time in a non-cooperative way. This paper suggests another game: because R&D and technology improvement takes time, the North usually is in the unique position of taking the first move in choosing its optimal subsidy rate. The South responds with its IPR protection. We showed that such IPR protection is tighter than what it would choose should both governments act at the same time. While the North gains by acting first, there are cases in which the South can also get a higher level of welfare than what it achieves in a Nash equilibrium. Thus allowing the North to act first could provide Pareto improvement. This paper also examines ways to improve the world’s welfare. The WTO approach is to rely primarily on the TRIPS agreement. The agreement requires member countries to provide tighter IPR protection, but since the North usually is already providing IPR protection tighter than what is stated, the agreement basically is putting constraints on the South. This approach leads to two problems. First, the South will have little incentive to follow what the agreement suggests. Second, this approach implies that the world’s welfare is improved at the expense of the South. This paper suggests that a different approach is to consider not just a tighter IPR protection provided by the South but also an appropriate R&D subsidy provided by the North. This will allow the world to achieve a higher level of joint welfare; furthermore, there are some interesting possibilities. First, the world’s welfare could raise at the expense of the North. Second, the global maximum may require a loosening, not tightening, of South’s IPR protection. Third, there are cases of Pareto improvement, with North and South both benefiting. The present TRIPS agreement might want to consider incorporating some aspects of the model we have presented. This collaborative effort may do more to enhance the world’s welfare.