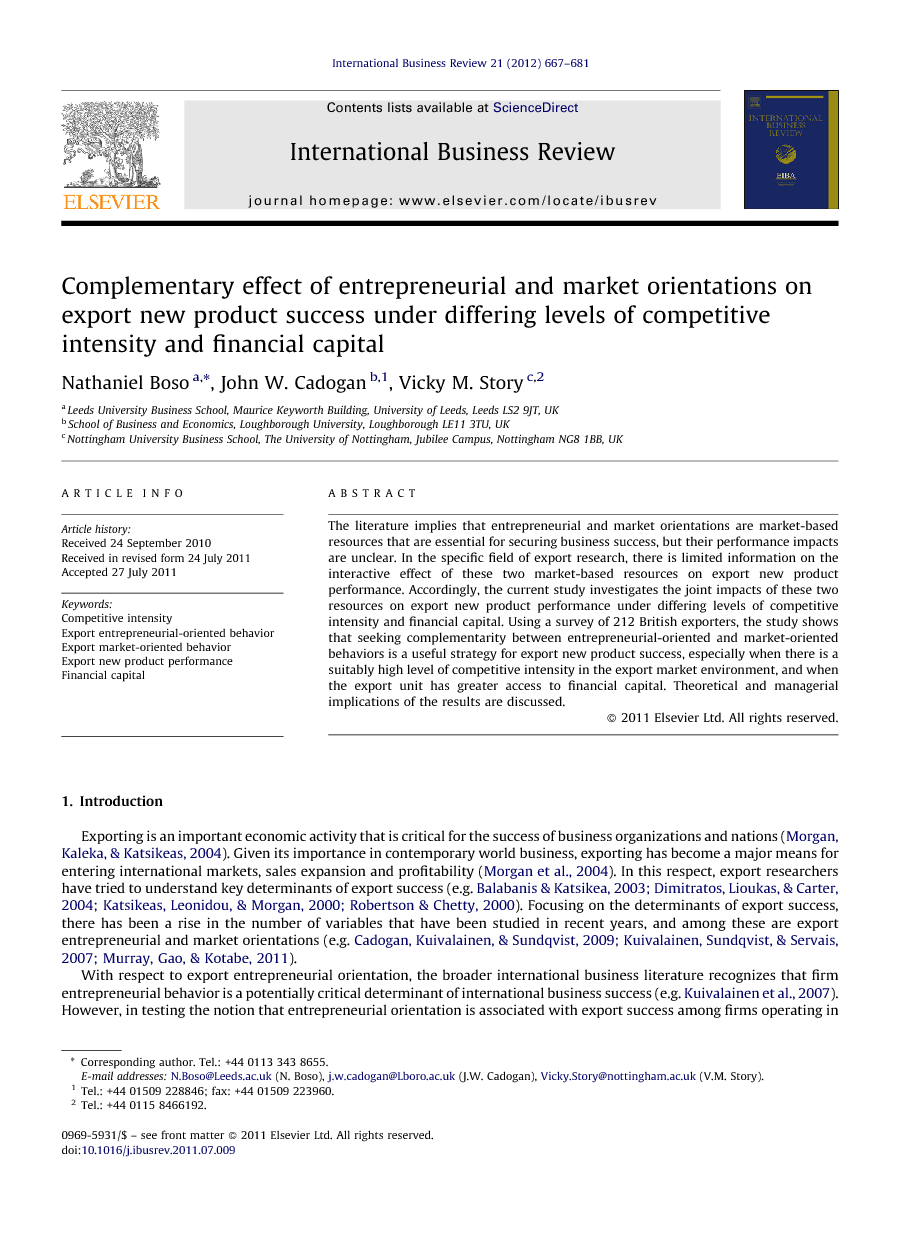 The literature implies that entrepreneurial and market orientations are market-based resources that are essential for securing business success, but their performance impacts are unclear. In the specific field of export research, there is limited information on the interactive effect of these two market-based resources on export new product performance. Accordingly, the current study investigates the joint impacts of these two resources on export new product performance under differing levels of competitive intensity and financial capital. Using a survey of 212 British exporters, the study shows that seeking complementarity between entrepreneurial-oriented and market-oriented behaviors is a useful strategy for export new product success, especially when there is a suitably high level of competitive intensity in the export market environment, and when the export unit has greater access to financial capital. Theoretical and managerial implications of the results are discussed.

The purpose of this study was to examine the complementary effect of export EOB and export MOB on export new product performance under varying levels of environment turbulence and financial capital. Findings from our empirical study imply that seeking complementarity between EOB and MOB is a useful strategy for export new product success, especially when there is a high level of competitive intensity in the export market environment, and when the export unit has greater access to financial capital. The results have some implications for researchers and managers. For export entrepreneurship and marketing researchers, a large body of research has focused on the role of entrepreneurial and market orientations in securing business success (e.g. Kirca and Hult, 2009 and Robertson and Chetty, 2000). However, Hult and Ketchen (2001, p. 899) posit that although these market-based resources have value for firms to achieve success, their potential benefits “should not be considered in isolation”. Previous empirical studies have shown that the nature of the relationships between EOB and performance, and between MOB and performance is unclear (e.g. Bhuian et al., 2005 and Cadogan et al., 2009). In the specific field of export research, empirical findings regarding the impact of export EOB and export MOB on export success remain equivocal (see Balabanis and Katsikea, 2003, Cadogan et al., 2009, Kropp et al., 2006, Murray et al., 2007 and Murray et al., 2011). Indeed, empirical evidence regarding the joint impacts of the two market-based resources on export new product performance is not well developed. Furthermore, empirical research examining the moderating effects of the competitive environment and financial capital on the relationship between export EOB and export MOB interaction and export new product performance is scarce. This study has draw on organizational ambidexterity logic, dynamic capability theory and the resource-based view to develop and test a model depicting the joint effects of export EOB and export MOB on export new product performance under differing levels of competitive intensity and financial capital. The results reveal that export EOB has a weak direct positive impact on export new product performance. In contrast, export MOB has a significant direct positive impact on export new product performance. Taken together, the results confirm Cadogan et al.’s (2009) contention that a high level of one strategic orientation might imply low attention being paid to other equally important orientations. The results also support Bhuian et al.’s (2005) work that advocates a combination of moderate EOB and high MOB. Furthermore, the findings also support the organizational ambidexterity logic, which suggests that where multiple competing orientations are implemented the behavior that is simple, easily repeated and offering immediate returns will dominate (Hughes et al., 2007 and March, 1991). What is more interesting, however, is the positive effect of export EOB and export MOB interaction on export new product performance. This evidence provides further support for the logic of organizational ambidexterity, which calls for integration of exploratory and exploitative market activities (Hughes et al., 2007 and March, 1991), and also confirms the marketing literature that argues that market-driving and market-driven behaviors are complementary capabilities that might produce synergistic outcomes (Ghauri et al., 2008 and Jaworski et al., 2000). It also confirms contentions from the dynamic capability literature that argue that dynamic capabilities require a blend of different strategic logics to achieve better performance outcomes (Hung et al., 2010 and Makadok, 2001), and extends the export entrepreneurship and marketing literature that has largely examined these two market-based resources separately. The finding that export EOB and export MOB interaction becomes more positive when competitive intensity increases lends support to the view that a firm must maintain a dynamic pool of complementary capabilities in competitively intensive environments to enhance new product success level (He and Wong, 2004, Kocak and Abimbola, 2009 and Prange and Verdier, 2011). Indeed, Jaworski et al.’s (2000) suggestion that firms should leverage market-driving and market-driven capabilities in turbulent and uncertain competitive environments has never been tested empirically. The results of this study therefore provide new insights on the usefulness of seeking synergy between market-driving (i.e. EOB) and market-driven (i.e. MOB) capabilities in highly competitive export market environments. Finally, prior studies have neglected the role of financial capital in fostering the joint effect of EOB and MOB on new product performance in export markets. Findings from this study extend Wiklund and Shepherd's (2005) study by showing that the joint effect of EOB and MOB on export new product performance becomes more pronounced in magnitude as the level of export unit's access to financial capital increases. That is, with greater access to financial resources, the effect of EOB and MOB interaction on export new product success is stronger (and more positive). With limited access to finance, firms find it difficult to simultaneously implement and maintain entrepreneurial and market-oriented strategies in export markets.