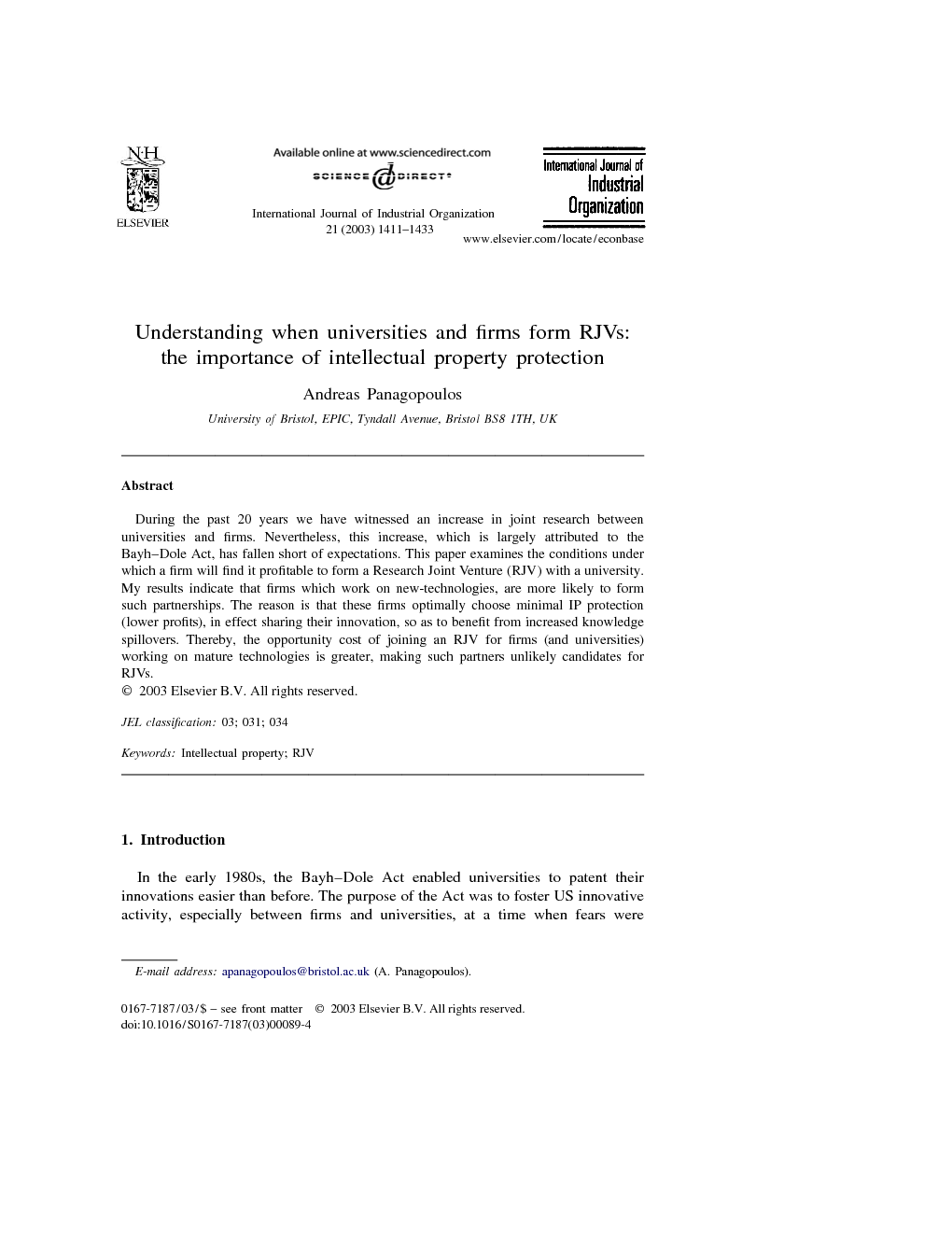 During the past 20 years we have witnessed an increase in joint research between universities and firms. Nevertheless, this increase, which is largely attributed to the Bayh–Dole Act, has fallen short of expectations. This paper examines the conditions under which a firm will find it profitable to form a Research Joint Venture (RJV) with a university. My results indicate that firms which work on new-technologies, are more likely to form such partnerships. The reason is that these firms optimally choose minimal IP protection (lower profits), in effect sharing their innovation, so as to benefit from increased knowledge spillovers. Thereby, the opportunity cost of joining an RJV for firms (and universities) working on mature technologies is greater, making such partners unlikely candidates for RJVs.

In the early 1980s, the Bayh–Dole Act enabled universities to patent their innovations easier than before. The purpose of the Act was to foster US innovative activity, especially between firms and universities, at a time when fears were mounting that the US was a technological laggard compared with Japan. There is no doubt that universities and firms had been jointly doing research well before the Bayh–Dole Act (Rosenberg and Nelson, 1994). Nevertheless, the Act was successful in bridging many barriers between firms and universities, leading them to form Research Joint Ventures (RJV). Indeed there seems to be an increase in RJVs, not only between US firms and US universities, (Baldwin and Link, 1998), but, as Fig. 1 displays, between EU firms and US universities as well (Link and Vonortas, 2002). However, as Hall et al. (2000) note, this increase is not as high as one would have anticipated. In explaining this shortfall in RJVs, Hall et al. (2000) stressed (among other reasons) the importance of intellectual property (IP) protection in setting obstacles to the formation of RJVs. Full-size image (40 K) Fig. 1. RJVs between EU firms and US universities. Source, Link and Vonortas (2002). Figure options The aim of this paper is to try to understand under what conditions firms are likely to form an RJV with an university and when can IP issues raise barriers. The theoretical literature on this issue is rather slim. With the exception of Beath et al., 2001 and Poyago-Theotoky et al., 2002, I am not aware of any other work, which studies the potential barriers in the formation of RJVs. The thesis advanced in this paper is that firms and universities, whose research is on new-technologies1, will find it easier to form such RJVs. A finding as such seems to be in line with evidence offered by Hall et al., 2001 and Link and Vonortas, 2002. In explaining the above proposition, the paper stresses the importance of the degree of IP protection. Specifically, the paper shows that the optimal policy for a firm (university) that conducts research on a fast evolving and not well-understood technology (i.e. a new-technology) is to share it, by choosing to have a low degree of IP protection2. For example, when Bell Laboratories invented the transistor, which is a classic example of a new-technology, they licenced their patent to most competitors. At the time, Bell Laboratories recognised that they should forego some of their profits to benefit from the extended knowledge produced by spillovers3. Keeping this in mind, when a firm (university) chooses to join an RJV, the firm must also account for its opportunity cost (the profits that it sacrifices by halting the research that it conducts on its own)4, and the greater this opportunity cost is, the harder it will be for a firm to enter such a research partnership. However, as the above paradigm emphasises, ‘mature’ technologies will generate greater profits, because the firm does not have to share them. Thus, the opportunity cost for firms that already work on ‘mature’ technologies will be greater. Thereby, firms and universities which conduct research on new-technologies will incur a lower opportunity cost, making them the most likely participants of an RJV. This finding is reinforced if one is to assume that universities concentrate their research only on new technologies5. This line of thinking suggests that a large firm, operating many different research projects at the same time (thus being most likely to work on new-technologies among other things), should find it easier to form an RJV, because it would have a lower opportunity cost. This accords with the evidence presented by Caloghirou et al. (2000), who find that firms that sell on average over ?1 billion tend to cooperate much more with universities. In what follows, Section 2 introduces the ‘technology generating’ function, Section 3 describes demand, while Section 4 explains the maximisation problem of the innovator, to be followed by 5 and 6 that find the optimal degree of IP protection and the conditions under which an RJV will be formed.

In order to regenerate the country's R&D activity, which it was feared to be lagging behind that of Japan, the US Congress passed the Bayh–Dole Act allowing universities to patent their innovations more easily than before. However, the increase in RJVs between firms and universities, initiated by the Bayh–Dole Act, is not as significant as expected. This paper studies the reasons why firms and universities find it difficult to form RJVs, stressing the role of IP protection. In its decision to form an RJV or not, a firm (and a university) has to make a choice between continuing to work along its own line of research, or to jointly develop a technology with a university. The choice of the firm will depend on how big its opportunity cost will be. As the paper shows, firms which already do research on new-technologies (i.e. technologies that are closer to science and are not yet ‘mature’ and well-developed), have a lower opportunity cost, hence they are the most likely participants of such RJVs. The explanation of the paper is premised on the importance of IP protection. Specifically, as firms (and universities) choose their preferential degree of IP protection in a market where firms licence their innovations to competitors, IP protection proves to be case specific. In particular, the degree of IP protection chosen by the firm will depend on how fast the technology evolves. In this framework, if the technology is new (fast evolving and closer to science), the firm will choose to share it, choosing to have a low degree of IP protection. Hence, the profits of the firm will be lower than those of a firm developing a slow moving, but ‘mature’, technology. The intuition behind the firm's choice rests on the increased knowledge spillovers from which the firm will gain, if it chooses a low degree of IP protection on a technology that is not yet well-developed to create ‘quality’ goods. Thereby, the opportunity cost for a firm that specialises on ‘mature’ and well-understood technologies will be greater than the one of a firm specialising on new technologies. Essential to the above argument is the assumption that firms make similar choices regarding their preferred degree of IP protection. In addition, I have allowed innovation to be partly driven by an exogenous parameter whose aim is to represent ability. These simplifications have greatly aided in simplifying the model but leave room for further research, hopefully in a model in which IP protection will be non-cooperative.