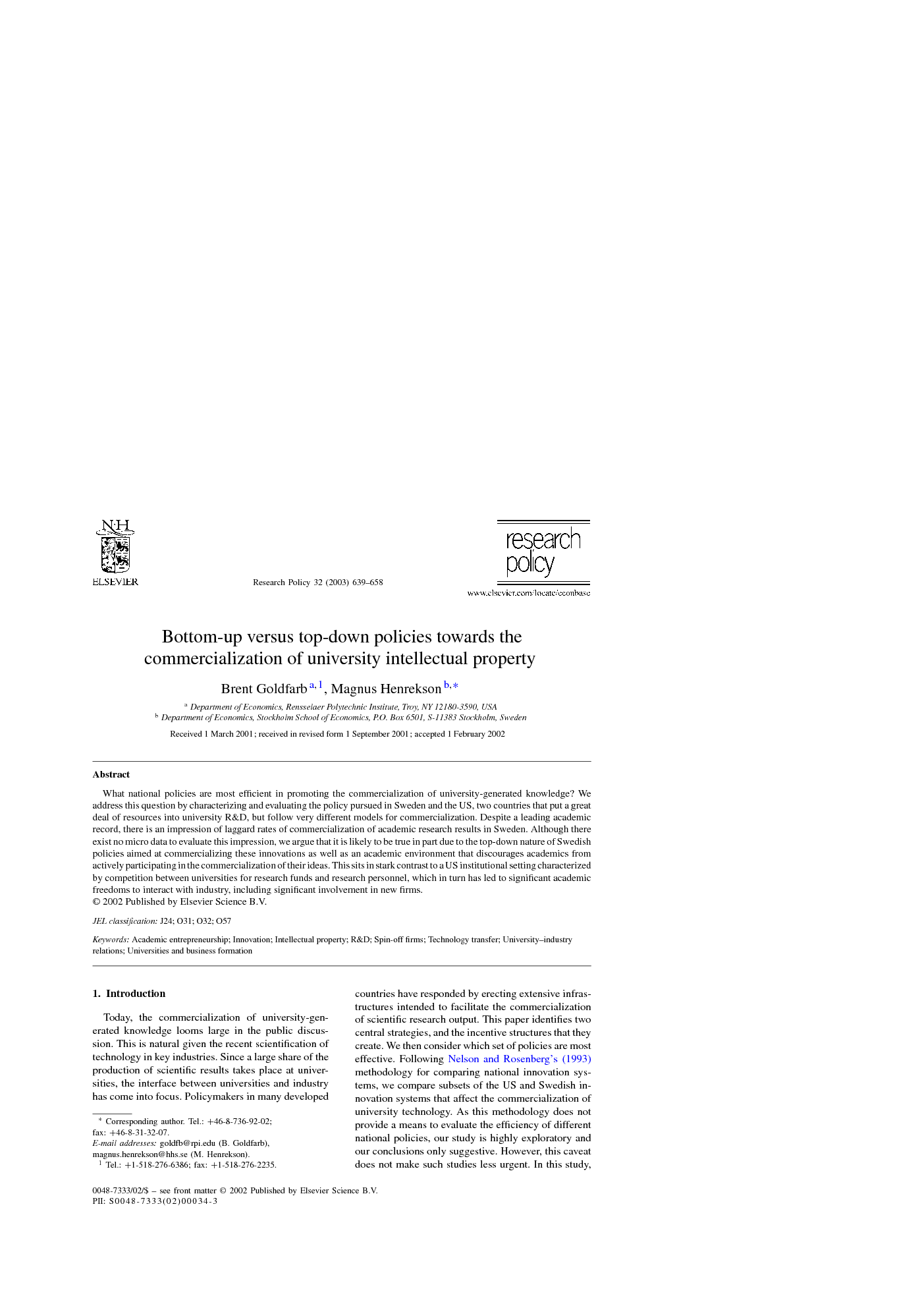 What national policies are most efficient in promoting the commercialization of university-generated knowledge? We address this question by characterizing and evaluating the policy pursued in Sweden and the US, two countries that put a great deal of resources into university R&D, but follow very different models for commercialization. Despite a leading academic record, there is an impression of laggard rates of commercialization of academic research results in Sweden. Although there exist no micro data to evaluate this impression, we argue that it is likely to be true in part due to the top-down nature of Swedish policies aimed at commercializing these innovations as well as an academic environment that discourages academics from actively participating in the commercialization of their ideas. This sits in stark contrast to a US institutional setting characterized by competition between universities for research funds and research personnel, which in turn has led to significant academic freedoms to interact with industry, including significant involvement in new firms.

Sweden is a country putting a great deal of resources into R&D; R&D spending relative to GDP has been the highest in the world for more than a decade. On per capita levels, the country also hosts several world-leading firms with a high R&D intensity, it holds a world class position in terms of publication rates in leading academic journals, and its government invests massively, given Sweden’s size, in the building of organizations to bridge the gap between university research and industry. In some key fields, Sweden is producing large absolute amounts of scientific output as well. At the same time, incentives for academics to establish intellectual property rights and pursue commercialization of their technologies are weak. Although the general performance of technology transfer in Sweden is unknown, it is clear that the performance of its academic-based start-ups is weak. The US picture, on the other hand, is quite different. This study attributes this difference to the distinct policies pursued by Sweden and the United States. The Swedish government has pursued a portfolio of policies aimed at directing funds at entrepreneurial activities in general, and specifically at the commercialization of academic research output. These policies have been largely ineffective due to a lack of incentives for academic researchers to become involved in the commercialization of their ideas. This, in turn, has likely dampened the incentives for academics to pursue commercially relevant areas of research and/or exploit commercially relevant applications of generic knowledge. The environment created by the Swedes sits in stark contrast to that in the US. In the US, the emergence of the flexibility needed to exploit commercially valuable research output is due to the relative lack of regulation as well as the intensive competition for research funds by researchers and research talent by universities. In particular, academics in the US are relatively free to respond to market incentives for the commercialization of their ideas. By contrast, in Sweden, researchers risk being penalized for attempting to commercialize their ideas. These results are likely to be widespread throughout Europe. For example, Gittelman (2002) suggests that poor performance in the commercialization of university biotechnology results in France is due to lack of incentives for French scientists to get involved in the commercialization process. We have also pointed out that universities have strong influence on academics extra-curricular activities. When policies are top-down, the desire of universities to implement them may vary, especially, as we have described before, since these universities face conflicting incentives. This has, in turn, affected academics’ incentives to pursue commercial opportunities. Not only has it dampened financial incentives, especially because of larger downside risk, but it has also created de facto professional penalties for engaging in commercializing activities. Therefore, a policy aimed at encouraging the commercialization of intellectual property should recognize that universities have the ability to restrict the pursuit by their faculty of commercialization opportunities, and policies directing them to encourage such activities are likely to fail if they are unlikely to gain from such pursuits. Interestingly, putting property rights in the hands of the inventor does not automatically create the best incentives for commercialization. To facilitate involvement in commercialization activities, not only must an academic inventor face strong incentives in the market for technology, but she must also not face strong disincentives in her university environment. The system works better when incentives are aligned. Because of lack of data, we were only able to determine that Sweden has performed poorly in academic entrepreneurship. We have discussed conditions where this shortcoming is significant and with the likely under-harvesting of research results in the field of biotechnology. The exploration of the impact of the Swedish (indeed European) incentive structure on other fields remains an open question. Hence, even if the goal of a policy is to facilitate the commercialization of academic ideas, one cannot draw the conclusion that, based on US experience, property rights should be handed over to the university. First, awarding property rights to universities works in the US because universities are largely autonomous, competitive institutions. In Sweden, however, universities are state-owned bureaucracies. Further study is needed to determine if, after adopting this policy, university bureaucrats would face strong enough incentives to develop offices similar to US TLOs. Second, even if such a policy worked, it is unclear if the benefits would be widespread enough to offset the costs in terms of the sacrifice of academic norms.