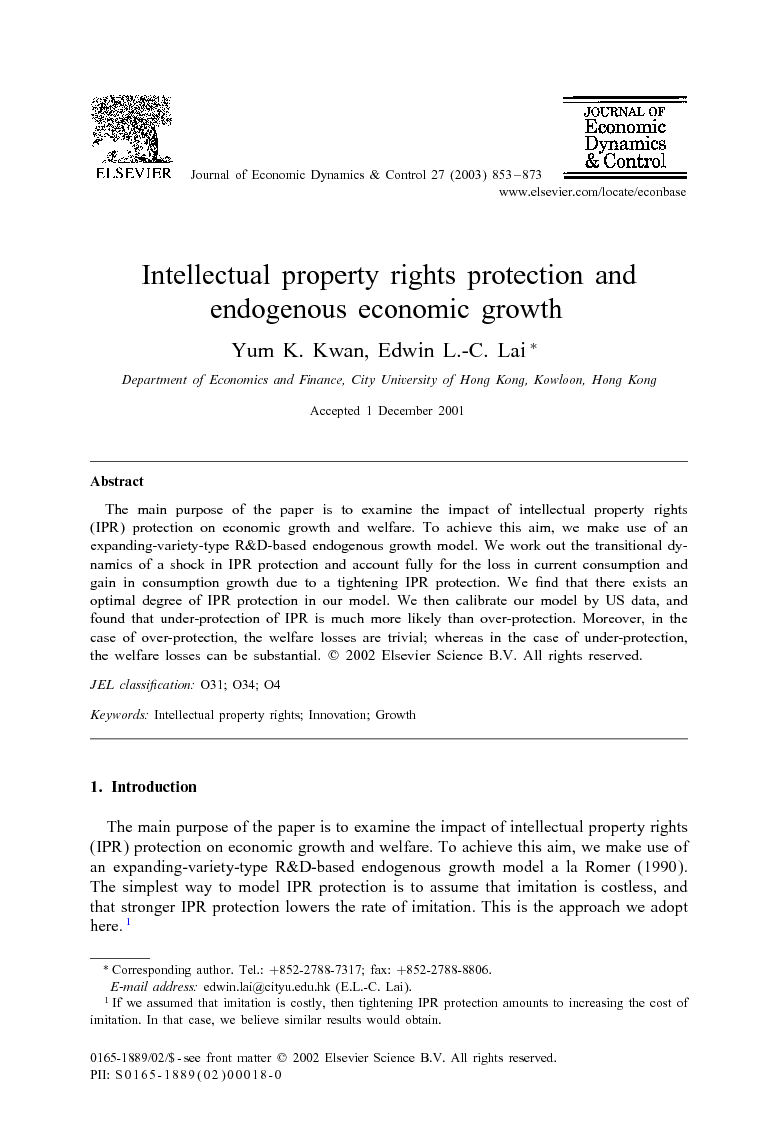 The main purpose of the paper is to examine the impact of intellectual property rights (IPR) protection on economic growth and welfare. To achieve this aim, we make use of an expanding-variety-type R&D-based endogenous growth model. We work out the transitional dynamics of a shock in IPR protection and account fully for the loss in current consumption and gain in consumption growth due to a tightening IPR protection. We find that there exists an optimal degree of IPR protection in our model. We then calibrate our model by US data, and found that under-protection of IPR is much more likely than over-protection. Moreover, in the case of over-protection, the welfare losses are trivial; whereas in the case of under-protection, the welfare losses can be substantial.

It must be borne in mind that our model is, in a sense, a metaphor that tries to capture the fact that development of new intermediate goods increases labor productivity, and that strengthening IPR protection lengthens the average duration of monopoly position of the innovators of these intermediate goods. A few caveats need to be mentioned. First, recall that we treat IPR protection as the part of “imitation rate” (rate at which monopoly profit is eroded) that can be influenced by government policy. This is a policy package that includes patent length and breadth, protection of trademarks, copyrights and trade secrets, and the degree of enforcement. Some may argue that even anti-trust policies can sometimes be treated as IPR polices. Accordingly, a strengthening of IPR in the US means a change in the whole package of policies in favor of the innovators. Consequently, any change in only one dimension of the package, e.g. an increase of patent length from 17 to 25 years, might have limited effect on the overall protection of IPR.8 Second, just like other one-sector, highly aggregated, macroeconomic models, ours cannot capture things such as sectoral differences. However, we gain in tractability, which allows us to calibrate the model using easily available macroeconomic data. Third, we have made use of a very simple model to illustrate the tradeoff between loss in current consumption and gain in consumption growth due to increase in IPR protection. While we gain from simplicity of the model, we might not have sufficiently captured certain important aspects of the economy. For example, the expanding variety model is subject to the criticism that it fails to capture obsolescence of goods—goods stay in the market forever. The absence of obsolescence might lead to an over-estimation of the degree of IPR under-protection that we have found to prevail in the real world. However, it is straightforward to show that the qualitative aspects of the results would be preserved if an exogenous rate of obsolescence is incorporated in the present model. It is endogenous obsolescence that is of substantive interest and has not been captured in this paper. We would extend the current model to incorporate endogenous obsolescence along the line of Lai (1998b) and the result would be reported elsewhere. Recently, there has been debate on how to reconcile the historical trend of increasing R&D-to-output ratio and a constant growth rate (see for example, Jones (1995) and Kortum (1997)). Our model features constant R&D-to-output ratio, which is at odds with the fact. However, we believe our results will not be altered qualitatively even if we adopted a modification such as in Jones (1995), which features increasing R&D to output ratio.9 Another extension we are carrying out is to assume a more general imitation technology to capture the fact that the rate of imitation is also dependent on the knowledge accumulated from past imitations. In this way, we allow for transitional dynamics of the hazard rate when there is a shock to IPR protection. Preliminary results show that this would give rise to multiple steady states and substantially richer transitional dynamics. It would be interesting to examine the qualitative and quantitative impacts of changes in IPR protection in such a more general and presumably more realistic model.