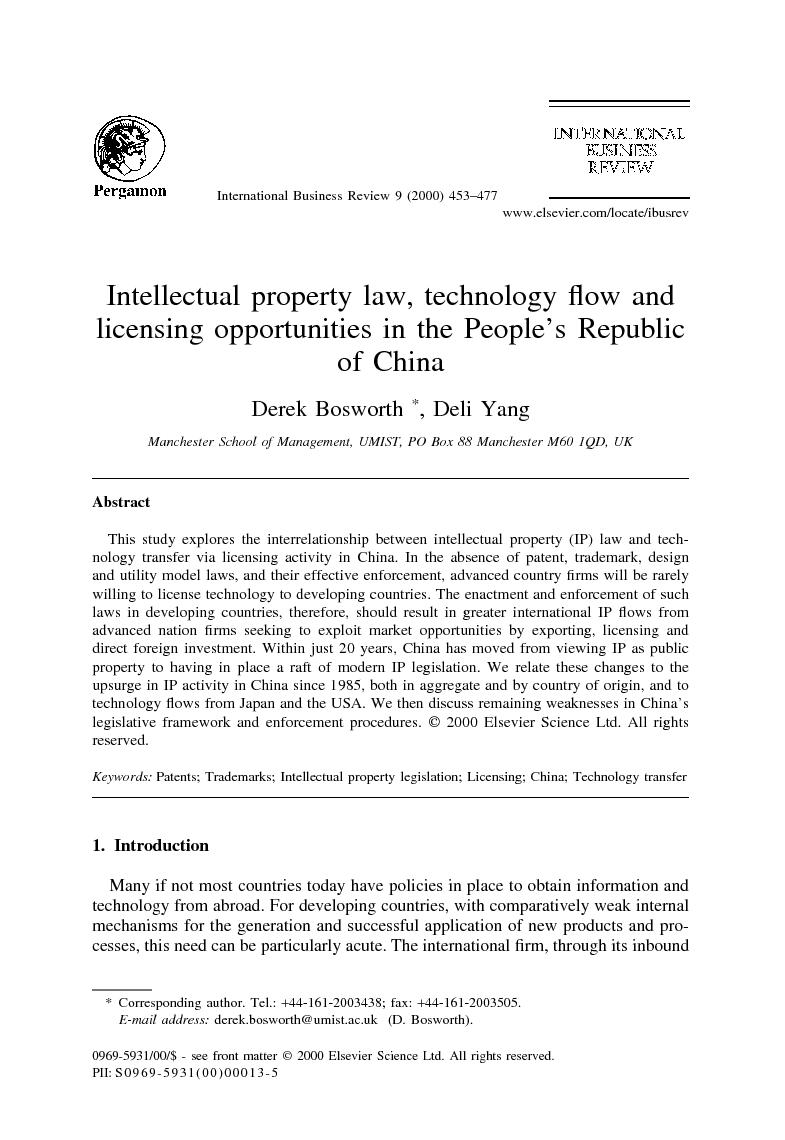 This study explores the interrelationship between intellectual property (IP) law and technology transfer via licensing activity in China. In the absence of patent, trademark, design and utility model laws, and their effective enforcement, advanced country firms will be rarely willing to license technology to developing countries. The enactment and enforcement of such laws in developing countries, therefore, should result in greater international IP flows from advanced nation firms seeking to exploit market opportunities by exporting, licensing and direct foreign investment. Within just 20 years, China has moved from viewing IP as public property to having in place a raft of modern IP legislation. We relate these changes to the upsurge in IP activity in China since 1985, both in aggregate and by country of origin, and to technology flows from Japan and the USA. We then discuss remaining weaknesses in China's legislative framework and enforcement procedures.

Many if not most countries today have policies in place to obtain information and technology from abroad. For developing countries, with comparatively weak internal mechanisms for the generation and successful application of new products and processes, this need can be particularly acute. The international firm, through its inbound foreign direct investment (FDI) and licensing activities, represents to developing countries a ready conduit through which technology can flow from the more advanced economies. However, the willingness of advanced country firms to exchange technology with developing countries often depends crucially on the existence of a legal framework of intellectual property rights (IPRs) that protects locally the interests of technology owners. Indeed, the protection of intellectual property (IP), as patents, trademarks, service marks and copyright, is now at the forefront of the globalisation of markets in ideas, technology and economics (Rader, 1996). Nevertheless, the existence of IP laws is not sufficient to bolster technology transfers to developing countries. With the exception of a few areas of technology where trade secrets are adequate protection, IP laws need to be strong, effective, and most importantly, enforced, if both affiliate and non-affiliate licensing from abroad is to be encouraged. Nevertheless, from the perspective of the developing country, there is a delicate balance between the protection of IP and the promotion of an indigenous stock of knowledge to aid economic development. It is logical to expect countries that are predominantly users of externally generated IP to be less likely to protect it than countries that are net producers of IP (Pasco, 1998). Anecdotal evidence from a number of countries that have moved to developed status suggests that “copying”, often illegally, is important in the early stages of this process, with Japan perhaps being a good case in point (Cheetham, 1998). However, a country's preparedness to continue “copying” during its early development is mollified by the importance to economic growth of participating in world trade, in terms of both imports of technology and exports to advanced countries. The central role of strong, local IPR in lowering barriers to global markets for technologies became clear during the Uruguay Round of the General Agreement on Tariffs and Trade (GATT). Seven years of negotiations eventually resulted in the Agreement on Trade-Related Aspects of Intellectual Property Rights: Including Trade in Counterfeit Goods (henceforth, the TRIPs Agreement) (Beier & Schricker, 1989). Today, the protection of IP is a key element of international trade negotiations (Lin, 1996). Of course, the introduction of strong IP protection, through new legislation and its enforcement, is not without cost to the country concerned. It implies that copying will result in infringement and, by implication, the use of extra-mural technology involves the negotiation of an economic payment to licence or purchase the technology. Nevertheless, without such legislation and appropriate enforcement, a developing country erects a barrier that restricts the inflow of more advanced technology. The greater willingness of developing countries to introduce IP protection reflects the growing recognition of the crucial need to access advanced technology to improve competitiveness and promote development. The People's Republic of China (PRC) provides a particularly interesting case in which to study the interrelationship between IP protection legislation and the promotion of inbound technology flows through foreign licensing. At different times, the PRC has held diametrically opposed views with respect to the treatment of IP. Legal protection of IP has been available in most Western countries for many years: UK patent laws, for example, are argued to date back to the 20 year monopoly for the manufacture of coloured glass given to John of Utyman in 1449, and systematic records date from 1617 (Boehm, 1967). Similarly, US patent and copyright laws are based on Article 1, Section 8 of the Constitution of the USA (O'Connor & Lowe, 1996). Until recently, for both philosophical and political reasons, the PRC offered little or no protection for IP. However, this situation has now altered dramatically; from 1982 onwards, a raft of IP-related legislation has been enacted. This paper documents the principal changes to IP laws within the PRC, and discusses the various internal and external pressures that have brought these changes about. We explore the effects of new legislation on IP activity in the PRC and on the potential for stimulating licensing. In particular, we examine the evolution of its legislative regime alongside the flow of patents, designs, trademarks and utility models into the PRC from other countries. These flows are important, as they are the forerunners of technology transfer and licensing activities by foreign and Chinese firms. We go on to consider more generally certain apparent weaknesses in current laws in the PRC, arguing that further improvements may give rise to greater inflows of IP and licensed technology.

This paper argues that IP laws and their enforcement play a crucial role in the process of economic development. Without such laws, the incentive for trade and FDI may be severely reduced, insofar as the associated product can be copied by the importing or host nation. The potential barriers that an absence of appropriate IP laws and weak enforcement impose on technology transfer through licensing and FDI are even more significant. This paper has shown that a natural corollary of China's “open door” was the introduction of IP laws. This was a very major development, given the dominant role that Confucianism and legalism have played in recent Chinese history and culture. The resulting introduction of a raft of IP laws has clearly given rise to a rapid increase in the flows of patent, trademark and design activity to the PRC by Western countries. It is also clear that the improvements to the legislation introduced in the early 1990s produced a further jump in IP flows. All of the foreign IP, irrespective of whether it is patents, designs or trademarks, have the potential for licensing opportunities. However, an investigation of Japanese technology flows and of US receipts from licensed technology sales suggests that the beginning of the 1990s witnessed a decrease in the transfer of technology under license from these countries to China, primarily for political and administrative reasons. A recovery in these flows has occurred from the mid-1990s onwards. Nevertheless, a broad review of the legal system and the mechanisms for enforcement reveal a number of major remaining issues which will need to be resolved if China is to continue to attract increasing volumes of IP, to realise its potential for technology transfer and licensing. It is clear that China still needs to do much more in terms of offering adequate IP protection to foreign inventors. The pace of recent reform, however, is likely to be maintained, given the importance attached to IPRs as a vehicle for trade and investment. The accession of China to the WTO, and the automatic adherence to the provisions and minimum requirements of TRIPS, will do much to alleviate the concerns of Western IPR owners regarding IP protection and enforcement in the country.