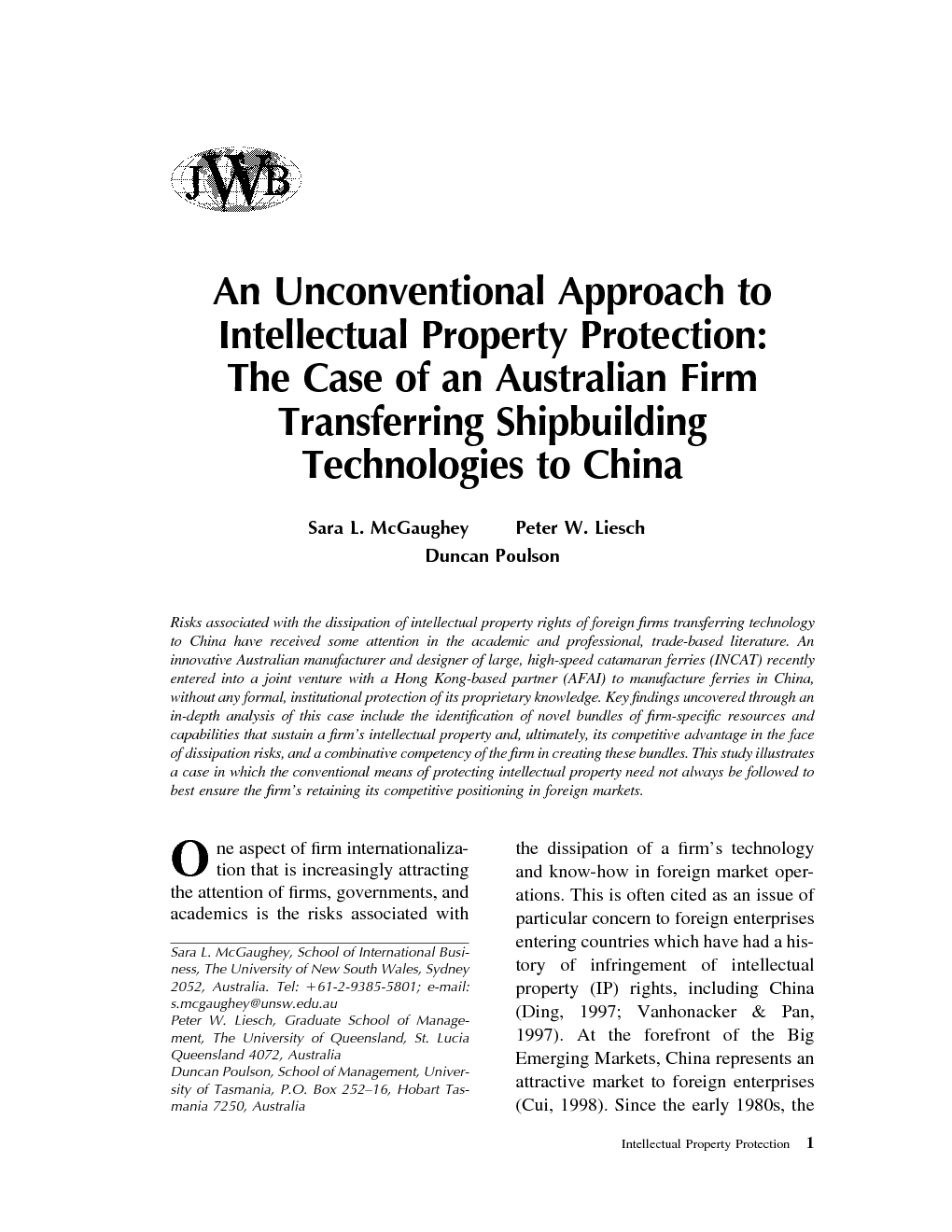 Risks associated with the dissipation of intellectual property rights of foreign firms transferring technology to China have received some attention in the academic and professional, trade-based literature. An innovative Australian manufacturer and designer of large, high-speed catamaran ferries (INCAT) recently entered into a joint venture with a Hong Kong-based partner (AFAI) to manufacture ferries in China, without any formal, institutional protection of its proprietary knowledge. Key findings uncovered through an in-depth analysis of this case include the identification of novel bundles of firm-specific resources and capabilities that sustain a firm’s intellectual property and, ultimately, its competitive advantage in the face of dissipation risks, and a combinative competency of the firm in creating these bundles. This study illustrates a case in which the conventional means of protecting intellectual property need not always be followed to best ensure the firm’s retaining its competitive positioning in foreign markets. One aspect of firm internationalization that is increasingly attracting the attention of firms, governments, and academics is the risks associated with the dissipation of a firm’s technology and know-how in foreign market operations. This is often cited as an issue of particular concern to foreign enterprises entering countries which have had a history of infringement of intellectual property (IP) rights, including China Ding 1997 and Vanhonacker and Pan 1997. At the forefront of the Big Emerging Markets, China represents an attractive market to foreign enterprises (Cui, 1998). Since the early 1980s, the Chinese ‘open door’ policy has enabled greater flexibility for foreign business activities in China, with the importation of technology and know-how being a primary focus of the Chinese government’s policies (Chen, 1995). Indeed, China’s modernization programs, popularized since 1977 by Deng Xiaoping, have recognized the critical importance of imported technology transferred from foreign corporations and governments (Tackaberry, 1998). This same philosophy remains today. To facilitate the importation of technology from abroad, it has often been argued that strong IP protection is necessary. The willingness of technology-rich foreign firms to transfer technology to less-developed nations has arguably been jeopardized by the threat of dissipation of IP rights embedded in their products and processes (de Bruijn & Xianfeng, 1993), although in some quantitative studies the variables chosen to capture the importance of IP protection are insignificant Ball et al 1993 and Vanhonacker and Pan 1997. Although China was accepted as a member of the World Intellectual Property Organization in 1980, the introduction of China’s patent law in April 1985 was viewed as vulnerable to one-sided interpretation by a number of foreign firms (Chen, 1995). Furthermore, while respect for individual property rights is deeply rooted in the individualism (Hofstede, 1994) of many Western cultures and nations, the collective and group-oriented Confucian and Marxist heritages of China are at odds with such a belief (Zeller, 1999), adding to the perceived risks for foreign technology-based firms operating in China. Deng and colleagues (1996) identify China, in particular, as having weak IP rights legislation, a very weak level of enforcement and a very weak overall level of protection, when compared with other developing Asian economies such as Indonesia, Malaysia, and the Philippines. Protection of foreign firms’ technologies has, however, been strengthened by Memorandums of Understanding on IP protection between China and a number of her trading partners. China has also recently demonstrated an increased commitment to international standards in trade-related areas including IP protection, as is evidenced by its substantive compliance with the requirements of the GATT Uruguay Round Agreement on Trade-Related Aspects of Intellectual Property Rights and efforts to gain membership of the World Trade Organization (WTO). Although IP issues have not been a major sticking point in the negotiations concerning China’s entry into the WTO, China’s accession to the WTO is likely to be viewed as a positive step towards mitigating the perception that remains among many technology-oriented organizations that there is a high risk of dissipation of one’s proprietary know-how in China. Indeed, China’s 1996 APEC Individual Action Plan outlines a number of strategies designed to enhance the protection of IP rights should it gain access to WTO by 2000, including improvements in administrative enforcement, the strengthening of judicial tools and efforts to further enhance public awareness of IP right protection. Nonetheless, the ongoing perception of IP-related risks in China is also partly a function of China’s approach to technology transfer. China’s technology transfer regulations have been written to favor the Chinese recipient firm. For example, the foreign-licensed technology typically belongs to the Chinese partner following expiry of a technology transfer agreement, which is generally of less than ten years duration (Bassolino & Tse, 1999). This is the antithesis of a fundamental tenet of Western technology licensing, in which the use and disclosure of the IP by the terminating licensee is precluded. In addition, the codified technology that is transferred to a Chinese venture must be certified by a government research and design institute, whose charter is also the diffusion of technologies to domestic enterprises (Tackaberry, 1998). Consistent with, and perhaps a consequence of, these policies and procedures are a number of problems that a foreign investor in China may face, including the counterfeiting of products made in China, the unauthorized sale of products made under license, and the unauthorized use of technology that has been transferred (Wheare, 1996). Illustrating this concern in the Chinese context, the Chairman and Managing Director of Zhuhai Toria Marine Engineering Co. Ltd., a joint venture between an Australian and a Chinese firm, described one experience as follows: I was at a small shipyard in Xinhui on a visit looking for subcontractors. Shortly before this visit, a city close by had purchased a state-of-the-art high speed catamaran ferry from a West Australian shipbuilder. To my surprise and horror, I was proudly shown copies of line drawings and enough structural and mechanical detail to build this first class vessel there and then (Gibbons, 1996, p. 40).

The case selected for investigation in this paper, INCAT, was purposively chosen to advance our understanding of and offer new insights into specific issues concerning the management of IP dissipation risks facing an innovative, technology-rich Australian firm operating in China. In response to the research question posed, a key finding of this paper—contrary to what might be expected—is that INCAT does not view the counterfeiting of its vessels, the unauthorized sale of its products made under license or the unauthorized use of technology that has been transferred as risks warranting formal IP protection through, for example, patents or registered designs. Indeed, this approach to the Chinese market is not unique, but an approach taken by INCAT worldwide. Because the company does not emphasize the risk of a former partner or competitor in China reproducing its vessels, INCAT’s less-than-orthodox means of protecting its intellectual property may seem, at first glance, to be at variance with the literature, which stresses the importance of formal protection of IP. Indeed, to an observer, and even a rival firm, INCAT might be perceived to operate a risky strategy of IP protection. This firm operates in a particular industrial sector that is characterized by the nature of the product it manufactures and the market demands which must be met. The product embodies sophisticated advanced technologies, and is a complex product. The market demands customization for specific needs, innovation to accommodate changing production requirements, the maintenance of an on-going service commitment to clients to minimize, for example, costly down-time, and an assurance of safety because disasters can be devastating. INCAT’s proprietary know-how is thus not tied solely to codified IP, but includes firm-specific resources and capabilities that enhance its ability to continuously innovate and market the product. Many of these cannot readily be defined or protected by legal mechanisms and are difficult to duplicate because of their causal ambiguity arising through their foundation in tacit knowledge accumulated over time. Thus, while trust has been a key factor in INCAT’s choice of joint venture partner and remains implicit throughout the relationship, the unconventional approach to IP protection pursued by INCAT is not necessarily trust-dependent. It is the nature of the bundle of resources in which the firm’s proprietary technologies and know-how are both embedded and renewed, and a combinative competency in creating these bundles that furnishes INCAT with a sustainable competitive advantage in its international markets. In addition, this firm’s ownership structure could explain, at least in part, the nature of the risks that this firm is prepared to accept. INCAT is a private, owner-manager organization. The owner-manager has special and particular attributes which establish the bases for the tacit knowledge underpinnings to this firm’s causal ambiguities. Such tacit knowledge is not easily reproducible. Furthermore, entrepreneurs are characterized by their own particular levels of risk acceptance. INCAT’s owner-manager does not perceive the absence of formal IP protection as a high risk approach to its operations in China. To others, however, the risks borne by INCAT might well be unacceptable. It is likely that these risks will not be acceptable to firms that are publicly-owned, for example, because stakeholders in these firms will generally possess risk preferences that are more conservative than are those of INCAT’s managing director and owner. Such risk preferences could direct the more risk-averse firm to select formal institutional means of protecting IP over those unconventional means identified here. The question of how applicable INCAT’s less-than-orthodox approach to IP protection is for other firms thus arises. As was identified in this study, it is unlikely that other firms in this same industry are able to replicate INCAT’s behaviors. Causal ambiguities grounded in tacit knowledge amassed over time have been identified as an explanation of this one firm’s IP protection. The specific set and mix of factors that sustain and protect INCAT’s IP is unlikely to be reproducible by other firms in this same industry or by firms in other industries. It is possible, even likely, that the manner in which INCAT operates in this industrial sector is not replicable in many other firms, particularly in those manufacturing less complex industrial products or consumer goods and services. This does not, however, preclude other firms operating in industries with similar characteristics (for example, highly customized and complex products) from creating their own causal ambiguities, and employing a nonorthodox mode of IP protection as demonstrated by INCAT. Such a strategy would seem especially valuable where legal mechanisms are not deemed sufficiently strong, as in the case of INCAT, or when employed in conjunction with more orthodox institutional mechanisms. Importantly, the experience and strategies of INCAT highlight the (often overlooked) value of entrepreneurial acumen and know-how as key firm-specific assets and their role in mitigating some of the apparent risks associated with investing offshore in emerging markets such as China.