عنوان انگلیسی
The three threats of action research: a discussion of methodological antidotes in the context of an information systems study
دانلود فوری مقاله + سفارش ترجمه 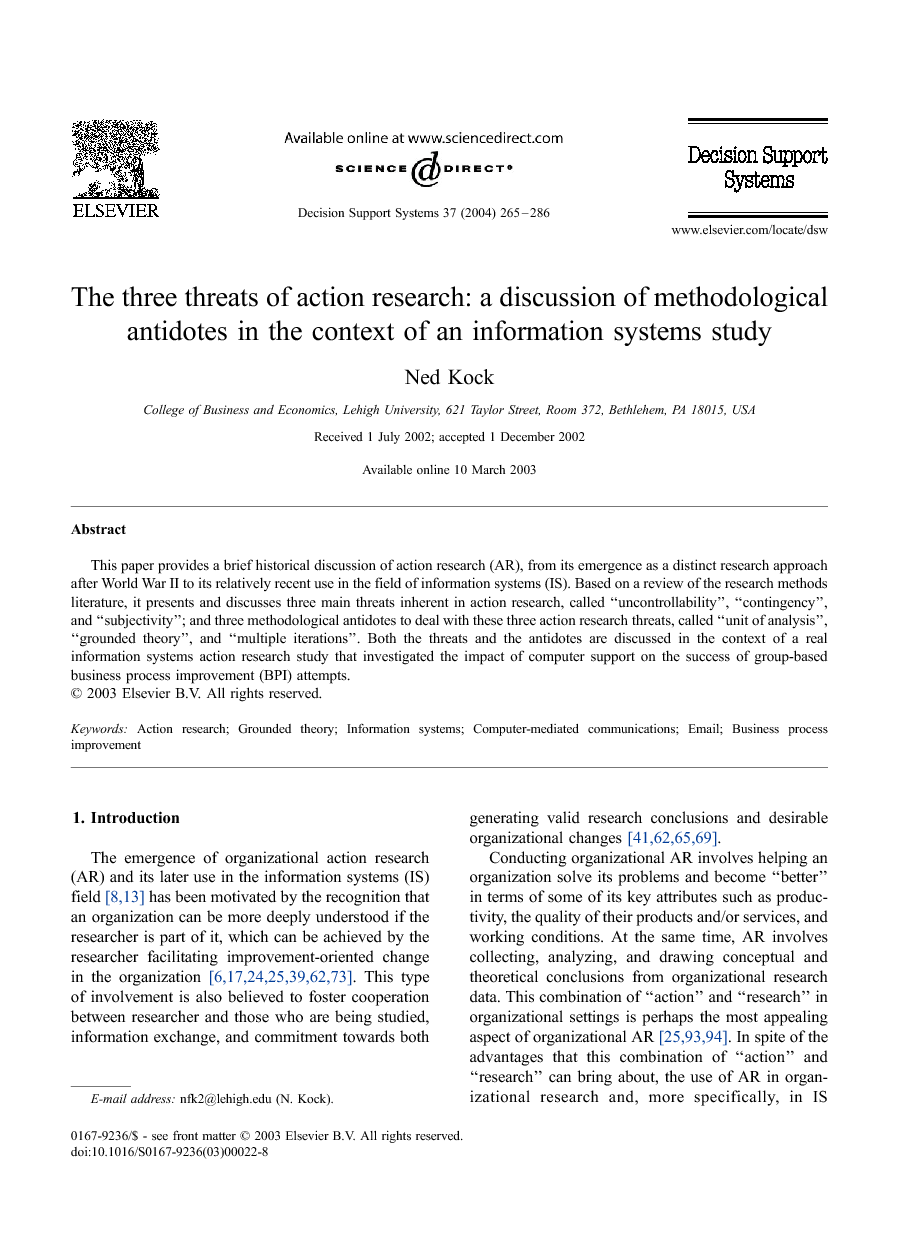 This paper provides a brief historical discussion of action research (AR), from its emergence as a distinct research approach after World War II to its relatively recent use in the field of information systems (IS). Based on a review of the research methods literature, it presents and discusses three main threats inherent in action research, called “uncontrollability”, “contingency”, and “subjectivity”; and three methodological antidotes to deal with these three action research threats, called “unit of analysis”, “grounded theory”, and “multiple iterations”. Both the threats and the antidotes are discussed in the context of a real information systems action research study that investigated the impact of computer support on the success of group-based business process improvement (BPI) attempts.

The emergence of organizational action research (AR) and its later use in the information systems (IS) field [8] and [13] has been motivated by the recognition that an organization can be more deeply understood if the researcher is part of it, which can be achieved by the researcher facilitating improvement-oriented change in the organization [6], [17], [24], [25], [39], [62] and [73]. This type of involvement is also believed to foster cooperation between researcher and those who are being studied, information exchange, and commitment towards both generating valid research conclusions and desirable organizational changes [41], [62], [65] and [69]. Conducting organizational AR involves helping an organization solve its problems and become “better” in terms of some of its key attributes such as productivity, the quality of their products and/or services, and working conditions. At the same time, AR involves collecting, analyzing, and drawing conceptual and theoretical conclusions from organizational research data. This combination of “action” and “research” in organizational settings is perhaps the most appealing aspect of organizational AR [25], [93] and [94]. In spite of the advantages that this combination of “action” and “research” can bring about, the use of AR in organizational research and, more specifically, in IS research, has been very limited [69], [71] and [83]. This is surprising, particularly given AR's potential for generating outcomes that are relevant to industry practitioners pointed out by Truex [101] and highlighted by the guest-editors of a recently published special issue on IS AR of the journal Information Technology and People [65]. Obviously, there must be reasons why AR is underrepresented. A review of the research literature suggests that AR poses unique “threats” to research success [46], [47], [79] and [87], which can potentially lead to a high proportion of failures in the conduct of AR and scare away potential adopters of AR as an approach for organizational research. This paper addresses this problem by presenting and discussing three fundamental “threats” posed by AR to researchers, as well as three methodological “antidotes” for the threats. Both the threats and the antidotes are discussed in the context of a real IS AR study that investigated the impact of computer support on the success of group-based business process improvement (BPI) attempts [64]. The paper is organized as follows. The section “Action research and its use in information systems” provides a brief historical discussion of AR, from its emergence as a distinct research approach after World War II to its relatively recent use in the field of IS. This section also contrasts AR with other research approaches in IS. This is followed by the section “The three threats of action research”, which presents and discusses three key threats posed by AR to researchers: Uncontrollability, contingency, and subjectivity. The discussion is based on a review of both the AR literature as well as the more general literature on research methods. The section “Dealing with the action research threats: a discussion of three methodological antidotes” presents and discusses three methodological antidotes to deal with the AR threats identified in the previous section. The antidotes are developed from the general literature on research methods and are called unit of analysis, grounded theory, and multiple iterations. The following section, “ Spotting the threats: a look at a real information systems action research study”, discusses the three threats based on a real IS AR study whose main goal was to investigate the impact of electronic communication support on BPI groups. The following section, “ Applying the methodological antidotes”, discusses the application of the antidotes in the context of the IS AR study presented in the previous section. Finally, the “ Conclusion” section concludes with a call for unity among those who subscribe to and practice AR and those who do not for reasons related to their epistemological orientation.

The discussion of threats and antidotes, conducted in this paper, illustrates an area of methodological inquiry that has met with some resistance in certain AR circles in the past [57,88,89] , but that can poten- tially lead to highly desirable outcomes, which is the adaptation and use of established research methods and techniques in the context of AR. The resistance has been motivated by the assumption held in someAR circles that AR is somehow opposed to positi- vism, and thus should not adhere to positivist research methods and techniques [67,89] . This creates prob- lems, since a large number of very useful research methods, techniques, and notions, have been devel- oped in the context of positivist research, including the unit of analysis method [30,38,104–106] and the notion that external validity is a desirable research outcome [15,29] , both employed and espoused, respectively, in this paper. This paper looks beyond the ‘‘AR versus positi- vism’’ debate, and it does so for a reason. The reason is the argument made by Kock and Lau [65] that AR and positivism can hardly be placed in the same conceptual category. Arguably, AR is a research approach, like experimental research, not an episte- mology, like positivism or interpretivism [58,83,99] . Thus, comparing AR with positivism is equivalent to comparing a ‘‘painting technique’’ (e.g., oil painting) with a ‘‘school of painting’’ (e.g., impressionism). That is, in the same way that oil painting cannot be directly compared with impressionism, AR cannot be directly compared with positivism. Thus AR cannot be opposed to positivism, even though it may not be the most appropriate research approach for traditional positivist inquiry [65] . Once this notion is more widely accepted by those who practice AR, the debate between them and those who subscribe to other research approaches that fall into the broad category of ‘‘positivist research’’ will be replaced by coopera- tion in the search for solutions to longstanding meth- odological challenges