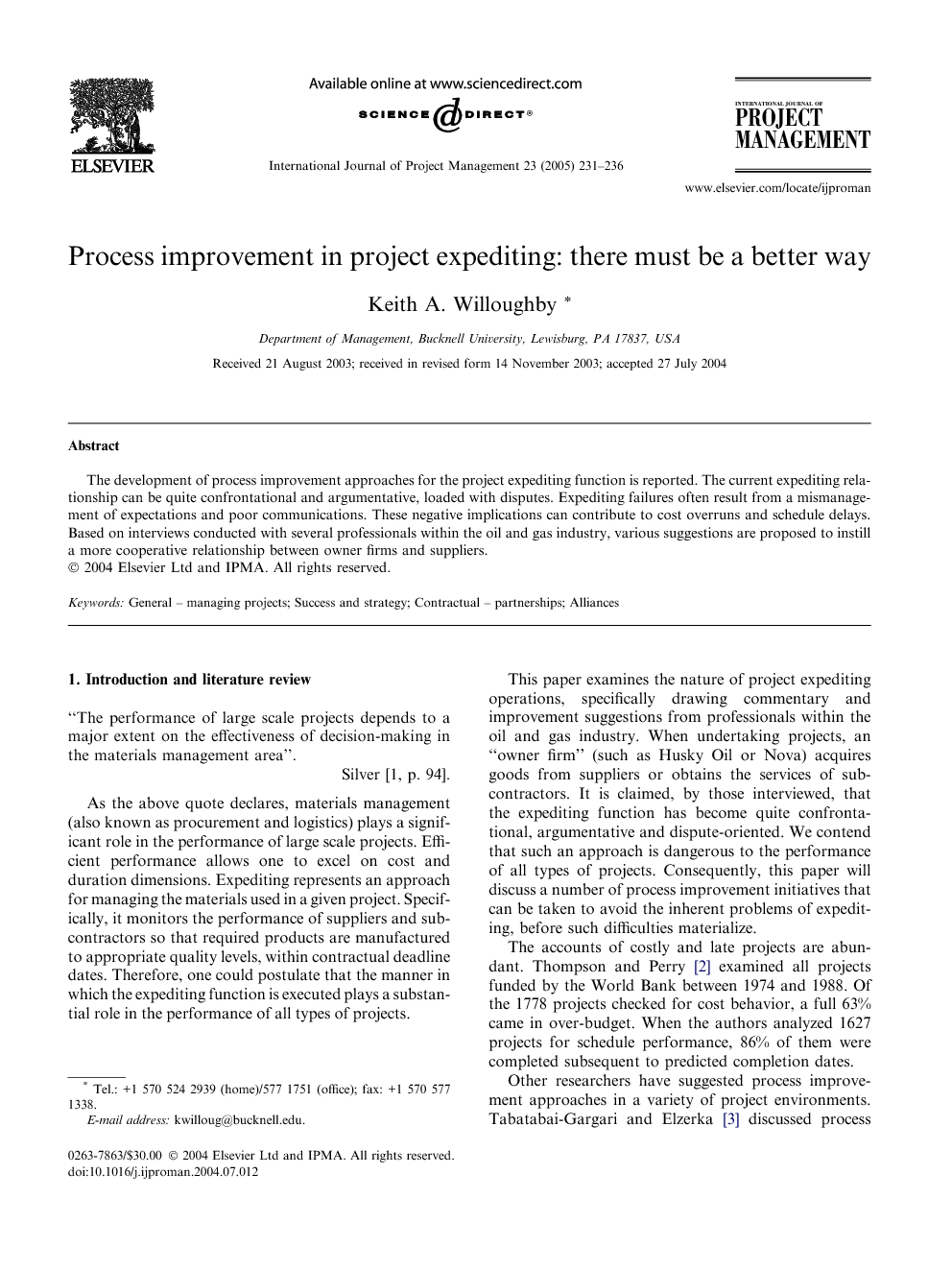 The development of process improvement approaches for the project expediting function is reported. The current expediting relationship can be quite confrontational and argumentative, loaded with disputes. Expediting failures often result from a mismanagement of expectations and poor communications. These negative implications can contribute to cost overruns and schedule delays. Based on interviews conducted with several professionals within the oil and gas industry, various suggestions are proposed to instill a more cooperative relationship between owner firms and suppliers.

“The performance of large scale projects depends to a major extent on the effectiveness of decision-making in the materials management area”. Silver [1, p. 94]. As the above quote declares, materials management (also known as procurement and logistics) plays a significant role in the performance of large scale projects. Efficient performance allows one to excel on cost and duration dimensions. Expediting represents an approach for managing the materials used in a given project. Specifically, it monitors the performance of suppliers and sub-contractors so that required products are manufactured to appropriate quality levels, within contractual deadline dates. Therefore, one could postulate that the manner in which the expediting function is executed plays a substantial role in the performance of all types of projects. This paper examines the nature of project expediting operations, specifically drawing commentary and improvement suggestions from professionals within the oil and gas industry. When undertaking projects, an “owner firm” (such as Husky Oil or Nova) acquires goods from suppliers or obtains the services of sub-contractors. It is claimed, by those interviewed, that the expediting function has become quite confrontational, argumentative and dispute-oriented. We contend that such an approach is dangerous to the performance of all types of projects. Consequently, this paper will discuss a number of process improvement initiatives that can be taken to avoid the inherent problems of expediting, before such difficulties materialize. The accounts of costly and late projects are abundant. Thompson and Perry [2] examined all projects funded by the World Bank between 1974 and 1988. Of the 1778 projects checked for cost behavior, a full 63% came in over-budget. When the authors analyzed 1627 projects for schedule performance, 86% of them were completed subsequent to predicted completion dates. Other researchers have suggested process improvement approaches in a variety of project environments. Tabatabai-Gargari and Elzerka [3] discussed process improvement in preconstruction activities. They examined computer-aided design and knowledge-based systems for expediting the generation of design alternatives, specifically focusing their work on the construction of mezzanine structures. Previously, the preparation of design quotations was conducted manually, taking about two hours. Now with this user-friendly automated system (the authors claim that salespersons with sparse computer literacy can be trained in a single hour to use the system), quotation time has been sliced to about ten minutes. More accurate cost estimates have also been realized. Ngee et al. [4] applied process improvement to build, operate and transfer (BOT) project negotiations. In this type of situation, the specific project is transferred to another company at a later stage. The authors determined suitable pricing structures for the financial and contractual parameters associated with these types of contracts. Instead of relying on time-consuming approaches to negotiate pricing structures, the authors developed a multiple regression model using the tariff, concession period, and rate of return as explanatory variables, and internal rate of return as a response variable. In the end, such a method eliminated the consumption of considerable resources (namely time) that had occurred under the previous system. Cho [5] discussed the conversion of the Bergstrom Air Force Base into a $600 million, 25-gate civilian airport in Austin, TX. A program management venture was adopted in the project, specifically addressing the project’s cleanup and environmental requirements. A rather high degree of project efficiency was attained; indeed, the author noted that this model may help to spur similar conversion efforts. Wright [6] studied the construction of 32 pre-engineered metal dormitories in 24 sites of the Texas Department of Criminal Justice (TDCJ) prison state system in a six-month period. The projects were handled through a cooperative contracting agreement. This prevented an adversarial relationship from developing between the firms. In particular, the TDCJ facilitated frequent coordination between the various firms, sometimes on an hourly basis. Joint ventures were established, as firms realized that they could accomplish more together than by working as individual companies. A teamwork atmosphere (“if one of us failed, we all failed”) prevailed among the firms. As the above literature illustrates, process improvement is often required to ameliorate the performance of large-scale projects and to mitigate the problems of adversarial relationships. We do note, however, that other industries have recognized that less confrontational processes can lead to enhanced cooperation and results. A discussion of some of these cases will serve to strengthen our argument that improving project expediting leads to better project performance. Various retail and manufacturing industries have appreciated the benefits of improved supplier-customer relationships. Kinsey [7] addressed the cooperative processes at work in the food industry. The author described the “Wal-Mart way of doing business”, a model for improving efficiency and for allowing supply chain partners to combine together in an effort to share consumer sales data and inventory management information. Indeed, the use of Wal-Mart as an appropriate benchmark for assessing cooperative supply chains is well documented. Briggs [8] analyzed Wal-Mart’s approach to collaborative planning, forecasting and replenishment (CPFR), a beneficial strategy for dealing with buyer–seller relationships. The company plans to implement such relationships with over 100 of its suppliers. Frequently, these cooperative processes use electronic data interchange (EDI) as a means to effectively plan these overall operations. Holland et al. [9] offer a thorough analysis of EDI implementation. Using the apparel industry as a case study, Schieier [10] showed that quick-response technologies (like bar-code scanning and EDI) permit a change in retailer/supplier relationships from adversarial conflicts to more cooperative alliances. Moynihan [11] focused his analysis on the beneficial outcomes of cooperative relationships within the healthcare industry. In this particular case, improved interactions occurred between healthcare providers and product suppliers, as well as between providers and payers. In a study of the US automobile industry, Iskandar et al. [12] discovered that managerial pro-activeness, an important component of cooperative supply chains, was the most significant factor in explaining overall success. This paper is organized as follows. In the next section, we examine the nature of project expediting and describe its current deficiencies. Then, we present some suggestions for improving project expediting. We make special mention of the benefits that could accrue from implementation of these proposals. Concluding remarks are provided in the final section.