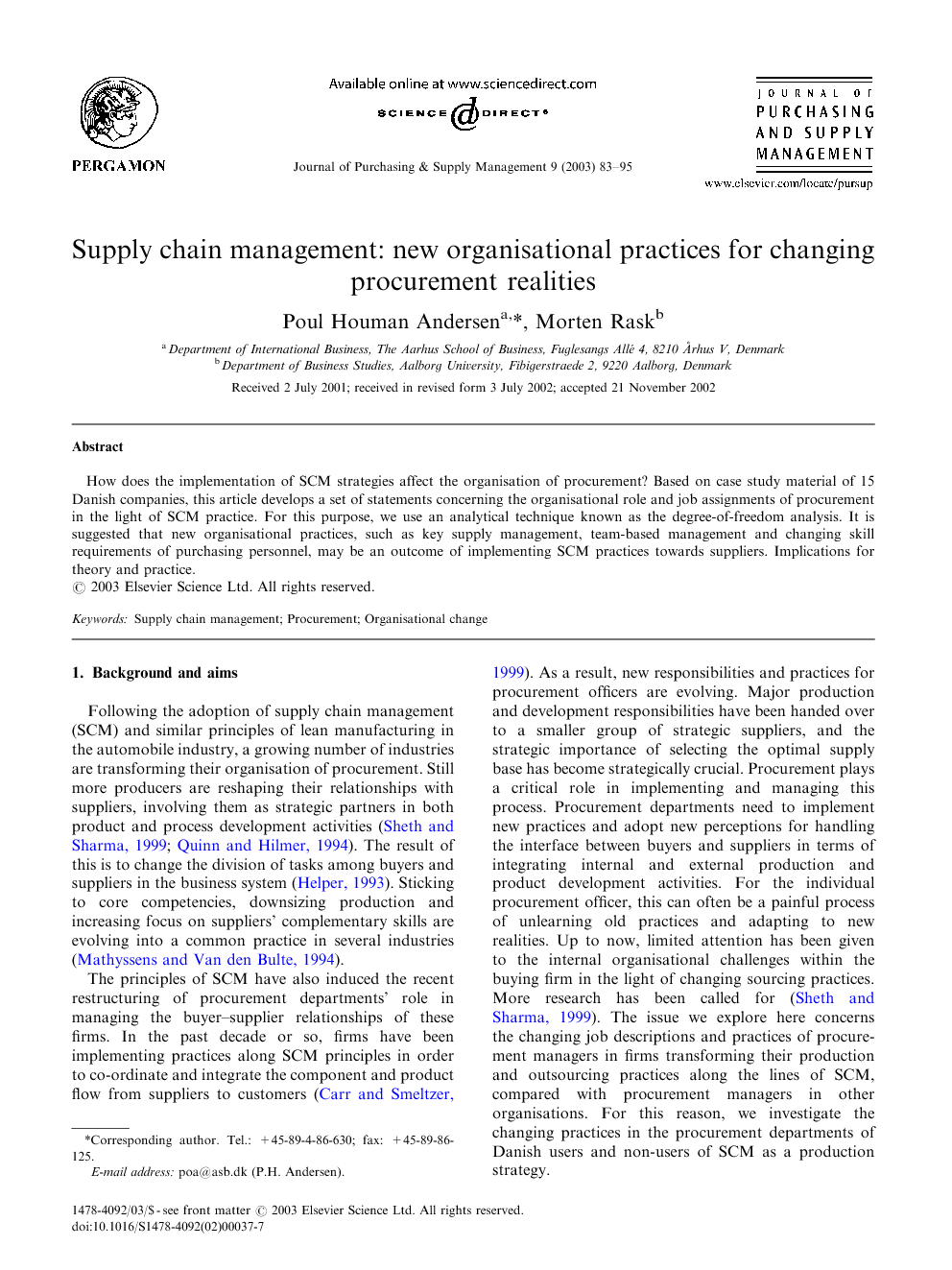 How does the implementation of SCM strategies affect the organisation of procurement? Based on case study material of 15 Danish companies, this article develops a set of statements concerning the organisational role and job assignments of procurement in the light of SCM practice. For this purpose, we use an analytical technique known as the degree-of-freedom analysis. It is suggested that new organisational practices, such as key supply management, team-based management and changing skill requirements of purchasing personnel, may be an outcome of implementing SCM practices towards suppliers. Implications for theory and practice.

Following the adoption of supply chain management (SCM) and similar principles of lean manufacturing in the automobile industry, a growing number of industries are transforming their organisation of procurement. Still more producers are reshaping their relationships with suppliers, involving them as strategic partners in both product and process development activities (Sheth and Sharma, 1999; Quinn and Hilmer, 1994). The result of this is to change the division of tasks among buyers and suppliers in the business system (Helper, 1993). Sticking to core competencies, downsizing production and increasing focus on suppliers’ complementary skills are evolving into a common practice in several industries (Mathyssens and Van den Bulte, 1994). The principles of SCM have also induced the recent restructuring of procurement departments’ role in managing the buyer–supplier relationships of these firms. In the past decade or so, firms have been implementing practices along SCM principles in order to co-ordinate and integrate the component and product flow from suppliers to customers (Carr and Smeltzer, 1999). As a result, new responsibilities and practices for procurement officers are evolving. Major production and development responsibilities have been handed over to a smaller group of strategic suppliers, and the strategic importance of selecting the optimal supply base has become strategically crucial. Procurement plays a critical role in implementing and managing this process. Procurement departments need to implement new practices and adopt new perceptions for handling the interface between buyers and suppliers in terms of integrating internal and external production and product development activities. For the individual procurement officer, this can often be a painful process of unlearning old practices and adapting to new realities. Up to now, limited attention has been given to the internal organisational challenges within the buying firm in the light of changing sourcing practices. More research has been called for (Sheth and Sharma, 1999). The issue we explore here concerns the changing job descriptions and practices of procurement managers in firms transforming their production and outsourcing practices along the lines of SCM, compared with procurement managers in other organisations. For this reason, we investigate the changing practices in the procurement departments of Danish users and non-users of SCM as a production strategy. Strategically, increasing competitive pressure and the rapid pace of technological change are motivating firms to focus on partnerships with suppliers as a means of distributing risks and enhancing business processes, through the development of joint skills and shared inter-organisational routines (Andersen and Christensen, 2000; Trent and Monczka, 1999). Firms are enhancing their innovative and competitive ability by focussing on their core competencies and leaving marginal activities to a selected group of competent (preferably world-class) suppliers (Sheth and Sharma, 1999; Cavusgil et al., 1997). Strategic outsourcing policies are expected to speed up time-to-market processes, improve supplier quality, and reduce organisational slack through the trimming of production organisation, reduction of fixed costs and enhancement of operational flexibility. The downside of this development may be increased reliance on, and increasing vulnerability to, suppliers’ delivery performance. Moreover, as the search for globally viable suppliers commences, supply chains become more geographically dispersed, increasing the need for control and co-ordination of the entire supply chain (Andersen, 1999). This in turn calls for possibilities for tracking and monitoring through management information systems to ensure that suppliers meet the strict requirements of delivery and inventory control. Information replaces inventory and organisational buffering (Germain and Dröge, 1997). The aim of this study is to deepen our theoretical understanding of the effects of SCM on the organisation and management of procurement. Recent studies have discussed the changing role of the procurement department in the organisation with respect to its increased participation in cross-departmental teams and corresponding involvement in decision areas outside the traditional realm of procurement (Pearson, 1999; Hult et al., 2000). However, their findings are not directly related to a particular strategy for managing and integrating the supply function. Moreover, they focus on an important, but particular, aspect of organisational consequence (increased participation in cross-departmental teams), rather than relating these to broader issues of changing demands to the procurement department. A more coherent theoretical understanding of the emerging issues and challenges to the procurement department has yet to be developed. We approach this on the basis of SCM literature and other related fields (relationship marketing and organisational theory). From a theoretical basis, we develop a set of statements and apply a case study methodology known as the degree-of-freedom analysis (DFA) (Wilson and Woodside, 1999). This is a formal case study approach used for matching patterns of observations to expected statements. This approach differs from traditional grounded theory in the Glaser and Straussian sense by allowing theory to be an active and explicit part of the researcher's analytical framework (Glaser and Strauss, 1967). Compared with analytical induction, it not only tests theory but also develops it. In conclusion, our intention is to modify existing theory and see how it applies to new and varied situations, as opposed to the situations for which it was originally developed. Our data material consists of case studies of 15 Danish manufacturing firms, representing different industrial sectors. Users of SCM are contrasted to non-users in order to benchmark and further contrast the implications of SCM to procurement practice. The paper is structured as follows: First, we introduce a conceptual model derived from current literature concerning the relationship between the evolving role of strategic outsourcing and the reorganisation of procurement practices. Next, we present the findings of our case study and compare these with the existing literature in order to extend and deepen present knowledge. Finally, a number of implications for academia and management practice are discussed.