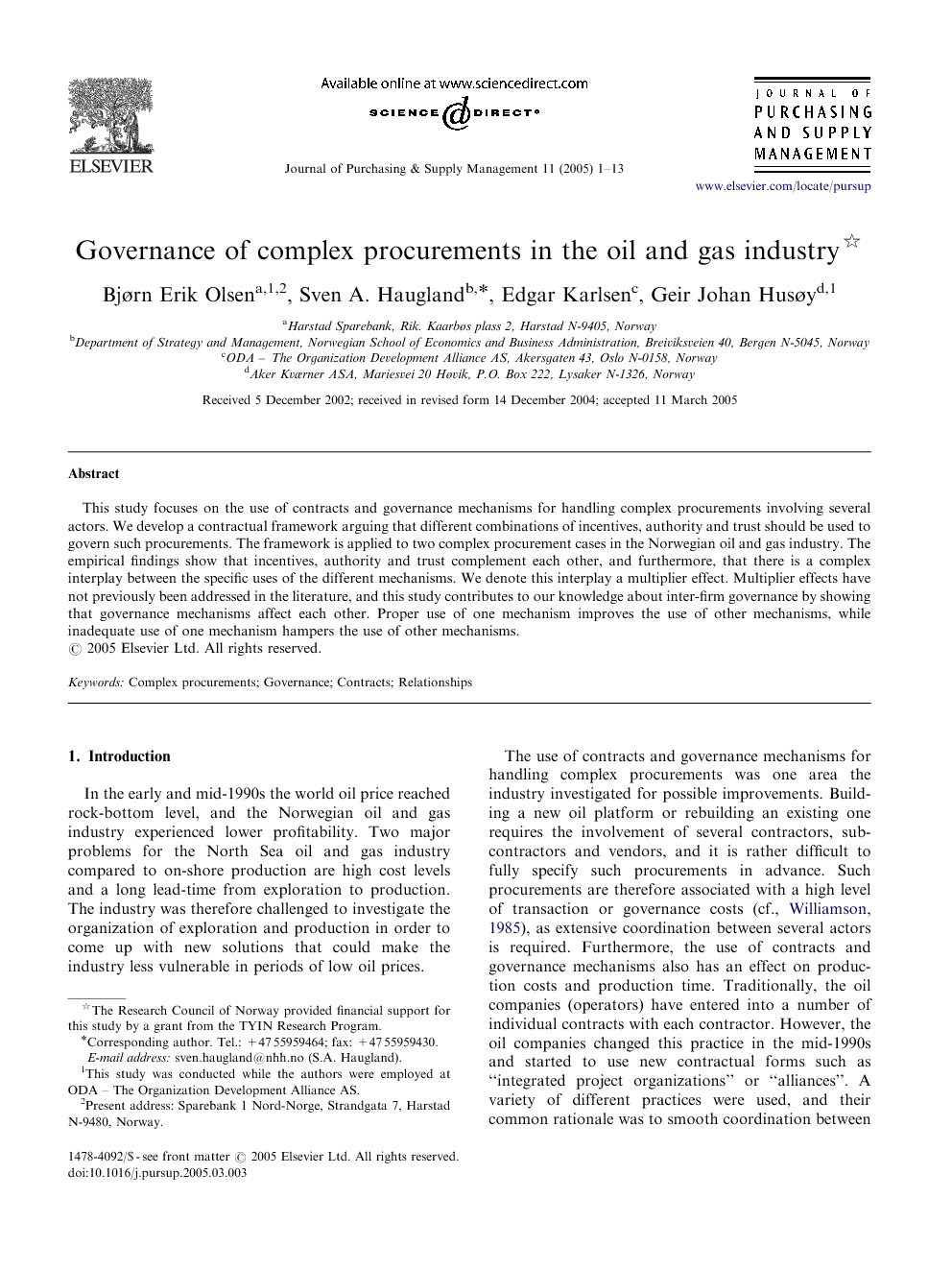 This study focuses on the use of contracts and governance mechanisms for handling complex procurements involving several actors. We develop a contractual framework arguing that different combinations of incentives, authority and trust should be used to govern such procurements. The framework is applied to two complex procurement cases in the Norwegian oil and gas industry. The empirical findings show that incentives, authority and trust complement each other, and furthermore, that there is a complex interplay between the specific uses of the different mechanisms. We denote this interplay a multiplier effect. Multiplier effects have not previously been addressed in the literature, and this study contributes to our knowledge about inter-firm governance by showing that governance mechanisms affect each other. Proper use of one mechanism improves the use of other mechanisms, while inadequate use of one mechanism hampers the use of other mechanisms.

In the early and mid-1990s the world oil price reached rock-bottom level, and the Norwegian oil and gas industry experienced lower profitability. Two major problems for the North Sea oil and gas industry compared to on-shore production are high cost levels and a long lead-time from exploration to production. The industry was therefore challenged to investigate the organization of exploration and production in order to come up with new solutions that could make the industry less vulnerable in periods of low oil prices. The use of contracts and governance mechanisms for handling complex procurements was one area the industry investigated for possible improvements. Building a new oil platform or rebuilding an existing one requires the involvement of several contractors, subcontractors and vendors, and it is rather difficult to fully specify such procurements in advance. Such procurements are therefore associated with a high level of transaction or governance costs (cf., Williamson, 1985), as extensive coordination between several actors is required. Furthermore, the use of contracts and governance mechanisms also has an effect on production costs and production time. Traditionally, the oil companies (operators) have entered into a number of individual contracts with each contractor. However, the oil companies changed this practice in the mid-1990s and started to use new contractual forms such as “integrated project organizations” or “alliances”. A variety of different practices were used, and their common rationale was to smooth coordination between all parties involved (operators, contractors, subcontractors and vendors), and thereby reduce costs, increase quality and shorten production time. The core idea was to develop new interfaces and overlapping boundaries between the parties that would enhance procurement and contracting efficiency. In general, it was assumed that one problem with individual contracts was that the actors were too loosely coupled, and that all parties could benefit from a higher level of integration. Complex procurements involve a large number of actors, they are often associated with a high degree of uncertainty and technological complexity, and will often last for several years. Within the procurement and supply chain literature, complex procurements have been studied in relation to construction projects, defense procurements, information technology and public–private partnerships. Such studies have, for example, focused on the use of contracts versus relational strategies in construction projects (cf., Cox and Thompson, 1997; Thompson et al., 1998), the role of integrated teams in defense procurements (cf., Moore and Antill, 2001), IT sourcing decisions and the use of contracts and relationships in IT sourcing (cf., Cheon et al., 1995; Clark et al., 1995; Kern and Willcocks, 2000; Kern et al., 2002; Willcocks et al., 1997). Furthermore, studies have also paid attention to the use of private companies in public health care (cf., Harland, 1996; Sussex, 2003; Thompson and McKee, 2004) and urban redevelopment projects (cf., Malizia, 2003). However, the simultaneous use of contracts and other governance mechanisms, such as relational norms and administrative controls is not well understood. It has long been argued that different governance mechanisms can be combined (cf., Bradach and Eccles, 1989; Stinchcombe, 1985), but still researchers do not share a coherent view on issues such as whether the use of one governance mechanism may exclude the use of others, or if different governance mechanisms act as complements (Poppo and Zenger, 2002). Empirical studies have shown that different governance mechanisms can be used for solving one specific problem (cf., Rindfleisch and Heide, 1997), and lately studies have shown that the combined use of contracts and relational norms increases performance (Cannon et al., 2000; Poppo and Zenger, 2002). One important reason for arguing that different governance mechanisms can be combined is that a large number of governance challenges are prevalent in most inter-firm relationships, and relying on one single mechanism is therefore not sufficient. Pure governance forms are therefore rarely found in practice (Bradach and Eccles, 1989), but specific mixes of the pure forms seem to be tailor-made according to the nature of the exchanges in question. The purpose of this article is to investigate the use of contracts and governance mechanisms for handling complex procurements. We are concerned to understand how different governance mechanisms such as contractual incentives, hierarchical mechanisms based on authority, and relational or trust-based mechanisms can be used to smooth the coordination process and thereby improve procurement efficiency by reducing transaction or governance costs. We focus on the interplay between different governance mechanisms, particularly the simultaneous use of different mechanisms and if different mechanisms may affect each other. The article is organized as follows: we first present different contractual models commonly used for handling complex procurements in the oil and gas industry, followed by a discussion of the theoretical background to our study. We then report the research methodology, and present two cases from the Norwegian oil and gas industry. Thereafter, the two cases are analyzed, and finally the results are discussed and implications emphasized.