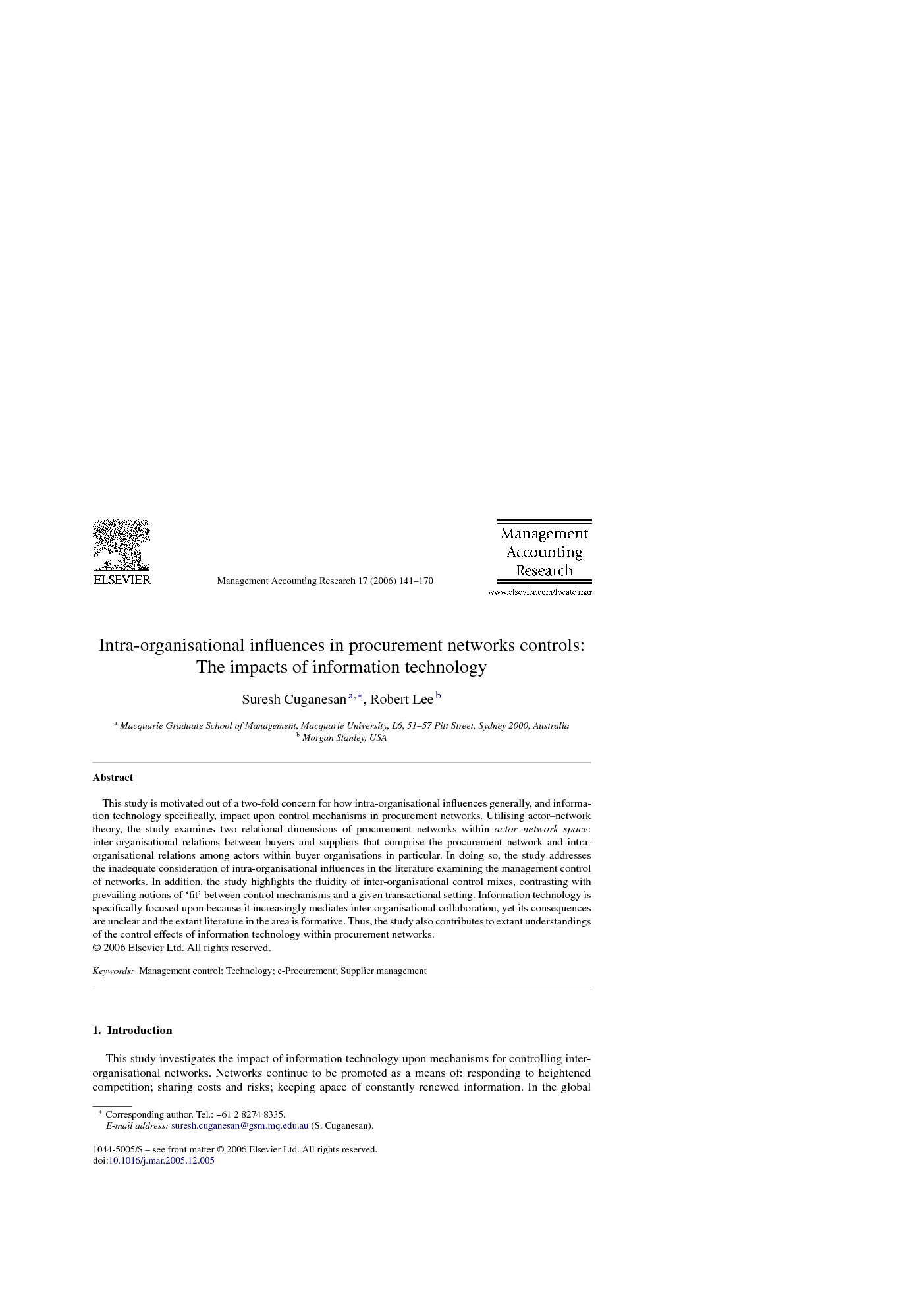 This study investigates the impact of information technology upon mechanisms for controlling inter-organisational networks. Networks continue to be promoted as a means of: responding to heightened competition; sharing costs and risks; keeping apace of constantly renewed information. In the global economy, new possibilities are relentlessly created within networks whilst, outside of networks, organisational survival is increasingly difficult (Castells, 2000). Indeed, most economic activity in leading industries is organised through networks (Ernst, 1994). Of the various network types that have emerged, the most visible form of collaboration has been in the area of procurement (Heide and Stump, 1995). More recently, there has been pre-occupation with the use of technology in the area of procurement (Davila et al., 2003). Consequently, it is the procurement network that is examined in this study; with an emphasis on how such networks are impacted when confronted with information technology based organisational change. The motivations for the study are two-fold. Firstly, despite generally positive views of networks and inter-organisational collaboration, there is growing evidence of failure (Langfield-Smith and Smith, 2003). This has initiated a renewed concern about the form and efficacy of control mechanisms that operate within outsourced arrangements and procurement networks (see, for example, Anderson et al., 2000, Dekker, 2004, Hopwood, 1996, Langfield-Smith and Smith, 2003, Tomkins, 2001 and Van der Meer-Kooistra and Vosselman, 2000). In response, this body of research has begun to theories and explore the inter-relationships between different forms of control and their antecedents. However, the linkages between intra- and inter-organisational relations has been overlooked thus far and remains an area requiring further research (Langfield-Smith and Smith, 2003 and Van der Meer-Kooistra and Vosselman, 2000). Secondly, despite the increasing use of information technology within procurement networks, the impacts of its implementation are unclear. Indeed, many commentators have observed that the complex dynamics of information technology-based organisational change have been relatively unexplored in a network setting (see, for example, Chan and Swatman, 2000). Early observations on the use of technology to create electronic procurement (e-procurement) networks were extremely enthusiastic about the potential benefits of doing so (see, for example, Cronin, 1994, Iskandar et al., 2001, Lloyd and Boyle, 1998 and Tapscott, 1995).1 However, a number of e-procurement networks and marketplaces have been abandoned in recent times.2 Furthermore, the use of technology in procurement has been described as facilitating the realignment of power relations in favour of buyer organisations (Evans and Wurster, 1997 and Frances and Garnsey, 1996), and adversely impacting buyer–supplier relations by shifting the basis of competition towards price (Fraser et al., 2000, Porter, 2001 and Sinha, 2000). In light of these diverse possibilities, the investigation of information technology and its effects for the control of procurement networks is considered to be timely, if not imperative. In addressing both of the above concerns, this study follows the introduction of information technology in a network of procurement that connected multiple buyers and sellers for the transacting of “indirect goods and services” or “indirect spend”.3 It investigates the impacts of this e-procurement technology for extant controls in both the inter-organisational and intra-organisational relationships that co-existed in the procurement network. In doing so, the paper makes two main contributions to the literature on inter-organisational control. Firstly, the paper presents a strong counter-point and a novel perspective to extant models that identify inter-organisational control patterns and their antecedents. These models presume a fit between control mechanisms and a given transaction setting whereby particular control mechanisms are chosen in response to particular transactional characteristics. In doing so, these models ‘black-box’ organisations, focusing on the inter-organisational transactional context to the detriment of intra-organisational influences. In contrast, this study employs actor–network theory to examine the relations between actors within and across constituents to inter-firm arrangements. As a result of ‘opening up’ buyer organisations in particular, the study finds that control mechanism changes occurred as a result of organisational participants pursuing their interests rather than a change in the transactional setting per se. Indeed, a possibility that runs counter to the models developed thus far is evidenced here, in that the choices and actions of interested organisational participants altered transactional characteristics (in particular, how it was constructed and perceived by actors). Thus, in contrast and difference to prior literature, the study finds a reconfiguration of control mechanisms that was shaped by the actions of interested organisational participants, in turn altering the transaction setting itself. Secondly, the paper addresses the relative lack of empirical investigation into the widespread use of information technology to mediate buyer–supplier relations. The paper explicates how the information technology implemented within the procurement network not only had important control consequences in itself but also influenced the mix of pre-existing control mechanisms in different ways. Furthermore, in contrast to the small group of studies that describe information technology as unproblematically reinforcing prevailing dominant interests, this study finds that suppliers were not merely passive victims of information technology. Rather, they were able to utilise its effects to their own ends and enhance the stability of procurement relationships, consequences that were unintended by those introducing the technology in the first place. Information technology provided both buyers and suppliers with an enhanced ability to act upon each other through a dialectic of accounting control. The paper is structured as follows. The next section reviews the literature that has described inter-organisational control mechanisms and their antecedents. The theoretical frame and site used for the research are presented in Sections 3 and 4, respectively, while the results of the empirical investigation are presented in the fifth section. The paper ends with a synthesis of its main findings, contributions and limitations.