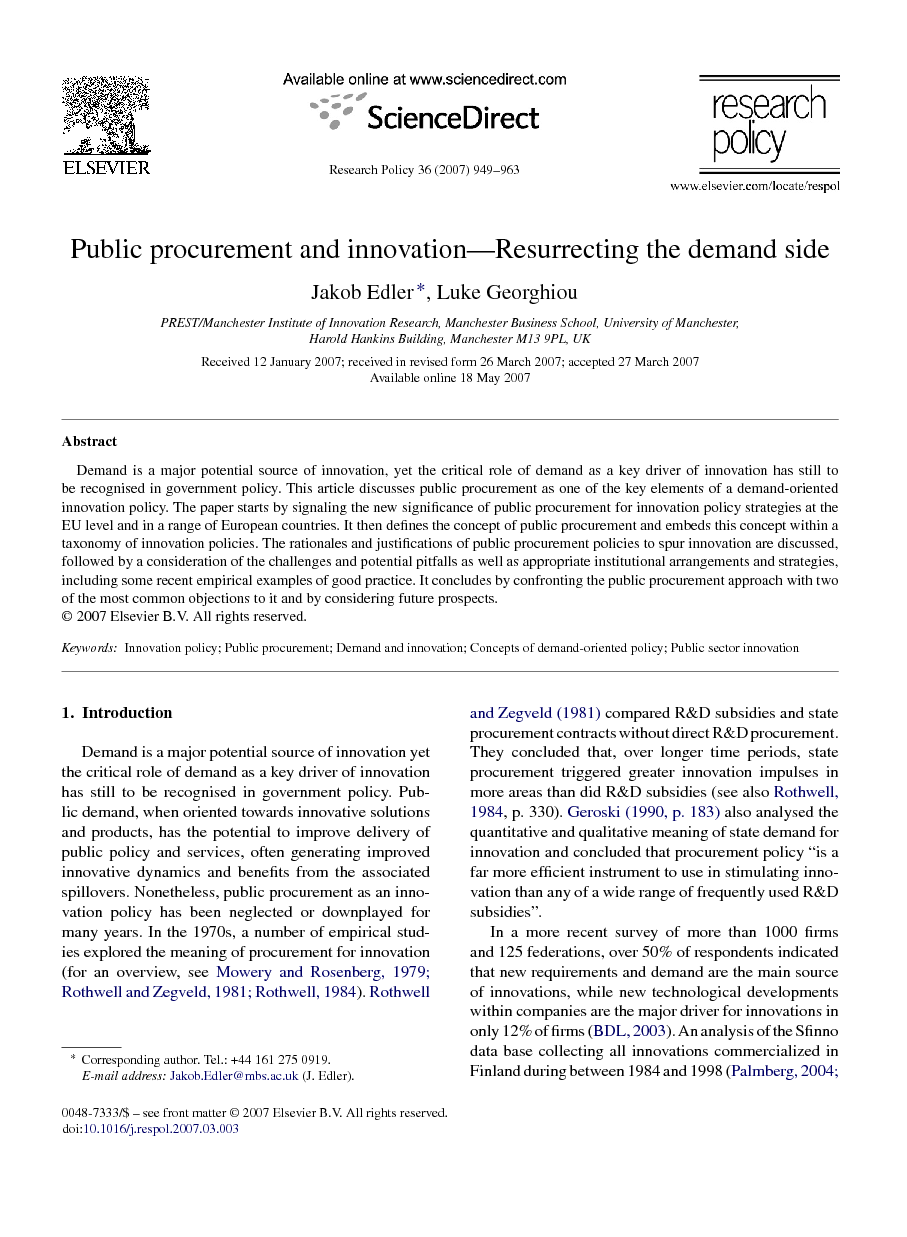 Demand is a major potential source of innovation yet the critical role of demand as a key driver of innovation has still to be recognised in government policy. Public demand, when oriented towards innovative solutions and products, has the potential to improve delivery of public policy and services, often generating improved innovative dynamics and benefits from the associated spillovers. Nonetheless, public procurement as an innovation policy has been neglected or downplayed for many years. In the 1970s, a number of empirical studies explored the meaning of procurement for innovation (for an overview, see Mowery and Rosenberg, 1979, Rothwell and Zegveld, 1981 and Rothwell, 1984). Rothwell and Zegveld (1981) compared R&D subsidies and state procurement contracts without direct R&D procurement. They concluded that, over longer time periods, state procurement triggered greater innovation impulses in more areas than did R&D subsidies (see also Rothwell, 1984, p. 330). Geroski (1990, p. 183) also analysed the quantitative and qualitative meaning of state demand for innovation and concluded that procurement policy “is a far more efficient instrument to use in stimulating innovation than any of a wide range of frequently used R&D subsidies”. In a more recent survey of more than 1000 firms and 125 federations, over 50% of respondents indicated that new requirements and demand are the main source of innovations, while new technological developments within companies are the major driver for innovations in only 12% of firms (BDL, 2003). An analysis of the Sfinno data base collecting all innovations commercialized in Finland during between 1984 and 1998 (Palmberg, 2004 and Saarinen, 2005) shows that 48% of the projects leading to successful innovation were triggered by public procurement or regulation.1 Not only demand as such, but also the interaction between demand and supply has crucial implications for innovation dynamics. Starting with von Hippel (1976) and Mowery and Rosenberg (1979, p. 148), a range of studies have argued that a major task for systemic innovation policy is the organisation of a discourse between users, consumers and others affected by innovations in order to articulate and communicate preferences and demand to the market (see also Smits, 2002). Furthermore, the scale and characteristics of demand in a given location have been recognised as major determinants of the competitiveness of locations and their innovation dynamic (e.g. Porter, 1990). In principle, the potential for using public procurement as an instrument for innovation is considerable. At 16.3% of the combined EU-15 GDP (Georghiou, 2004), public procurement represents a key source of demand for firms in sectors such as construction, health care and transport.2 Nonetheless, with a few exceptions, for many years the potential offered and challenges posed in using public procurement for innovation have been largely ignored in innovation policy, both conceptually and in practice. It has been argued that the introduction of more stringent competition regulations across the European Union has proven a major factor in the declining use of this instrument (Edquist et al., 2000). The extent of relative decline is indicated by statistics showing EU procurement four times less than the US in civilian sectors and two times less when defence is taken into account (Directors Forum, 2006). However, in the last 3–4 years, the issue has received renewed attention, especially at the EU level but increasingly so at national level in a number of Member States. This article analyses the concept of public procurement as an integrated tool of innovation policy.3 It explores the factors which have led to this renaissance of what has been considered a mature, if not obsolete approach, and its importance within the portfolio of demand-side policies. The paper starts by signalling the new significance of public procurement for innovation policy strategies at the EU level and in a range of European countries. It then defines the concept of public procurement and embeds this concept within a taxonomy of innovation policies. The rationales and justifications of public procurement policies to spur innovation are discussed, followed by a consideration of the challenges and potential pitfalls as well as appropriate institutional arrangements and strategies, including some recent empirical examples of good practice. The paper concludes by confronting the public procurement approach with two of the most common objections to it and by considering future prospects.

In this article, we have outlined the rationales, potential and necessary framework conditions for the use of public procurement as one type of innovation policy measure. The recent ongoing public debate especially in Europe but also in catching up countries such as China has revitalised this concept. There are obvious opportunities opened up through public procurement for mobilising innovation and at the same time better achieving public policy goals and delivering better service to the citizens. There is a clear potential danger that globally, but especially within Europe the national champion policy might make a comeback through public procurement favouring local companies. In principle, the WTO rules (Government Procurement Agreement, GPA) and the EU directives do not allow this. However, in countries that are not bound by the WTO GPA this is an obvious issue and opportunity. China, for example, has recently put in place a policy that explicitly discriminates against foreign owned companies when it comes to procurement of innovations. In fact, such procurement is a cornerstone of a new catching up strategy that increasingly relies on the increase of innovative capabilities of indigenous firms (Edler et al., 2007). From the perspective of internal market and free trade, this is a problem—especially within the EU. Not to violate the rules of free trade and open competition on the one hand and still to justify procurement in terms of innovation is – next to the institutional adaptation discussed above – the major challenge for procurement policies integrated in innovation policy strategies. To reiterate our argumentation above, there are two possible answers to this challenge. One is the definition of benefit for the country, region or municipality that procures. This benefit not only lies in the direct production of a supplier, but in the accompanying services, the installation and maintenance needed and so on. Learning and technological improvements tend to spill over within the market in which the procurement takes place. Second, following the logic of technologically driven competition in conjunction with “demanding demand”, advanced public procurement may enhance the technological level of competition, and also set incentives for local producers to face the technological challenge posed by advanced demand. Competition among producers and accompanying services and suppliers of the innovation is upgraded. In the long run, this benefits all related economic agents in a location. To deal with one last apparent objection, is public procurement about choosing one solution over the other through state intervention rather than letting markets decide; is it another variation of a “picking-winner strategy”? Not really. Picking winners was about selecting firms (national champions, sometimes ailing national champions) or about selecting technologies (specific solutions). Strategic public procurement is about selecting whole market areas in terms of their importance in the economy and their apparent ripeness for innovation. No specification is to be made of which firms or even of which solutions should be pursued in the first instance (Georghiou, 2006). Eventually under competitive conditions preferred solutions and suppliers will emerge but this happens in all markets. What must be achieved is an open process the result of which is that winners emerge. It is possible to deal with other concerns by the ways in which lead markets are promoted as a policy. First, a demonstrated level of commitment from business should be a prerequisite for action—a sector where the desire for co-ordination has already emerged. Secondly, the measures taken within that sector should preserve competition wherever this is feasible. For example, in procurement second sourcing, perhaps from an innovative SME could keep alternative options open. The aim of this article was not to reignite the old discussion on the relative importance of demand vis-à-vis supply-side factors for innovation. Rather, we simply argue the need to take demand, more concretely public demand, more into the focus of innovation policy making and use it to complement existing and new supply-side measures. For reasons of space and focus we have concentrated on one aspect of demand-side innovation policy but the agenda is also potent in the use of regulation and standards as well as the various forms of public support to spur private demand for innovation (Edler, in press). It is not an exaggeration to say that finding ways to mobilise these potentially powerful incentives for innovation is the principal challenge currently facing those engaged in policy design.