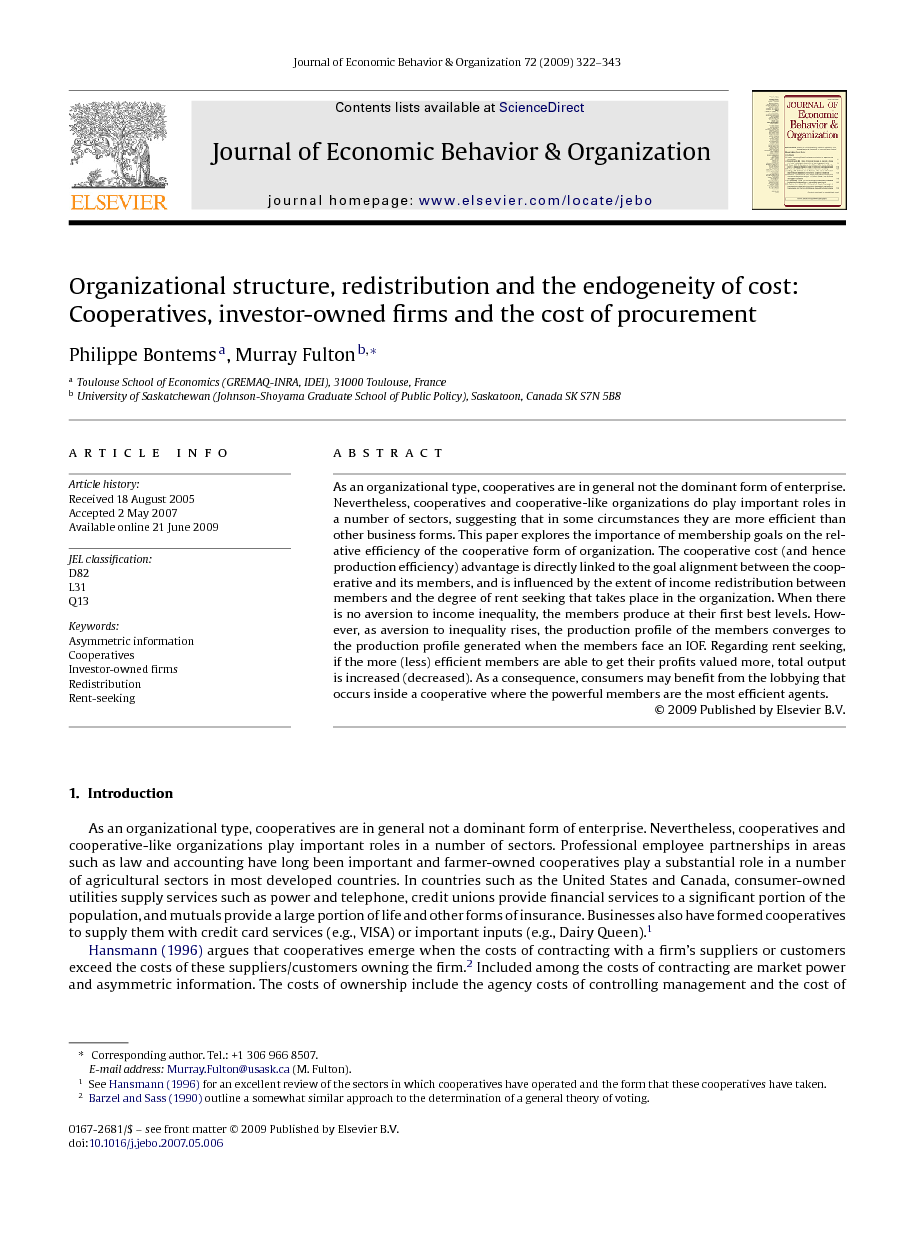 As an organizational type, cooperatives are in general not the dominant form of enterprise. Nevertheless, cooperatives and cooperative-like organizations do play important roles in a number of sectors, suggesting that in some circumstances they are more efficient than other business forms. This paper explores the importance of membership goals on the relative efficiency of the cooperative form of organization. The cooperative cost (and hence production efficiency) advantage is directly linked to the goal alignment between the cooperative and its members, and is influenced by the extent of income redistribution between members and the degree of rent seeking that takes place in the organization. When there is no aversion to income inequality, the members produce at their first best levels. However, as aversion to inequality rises, the production profile of the members converges to the production profile generated when the members face an IOF. Regarding rent seeking, if the more (less) efficient members are able to get their profits valued more, total output is increased (decreased). As a consequence, consumers may benefit from the lobbying that occurs inside a cooperative where the powerful members are the most efficient agents.

As Zusman (1982), Hansmann (1996), Hart and Moore (1996) and Albæk and Schultz (1997) have pointed out, the decision making process in a cooperative can have important efficiency effects on the organization. Moreover, the degree and nature of members’ goals are likely to have important efficiency effects. The purpose of this paper was to explore formally the importance of membership goals on the relative efficiency of the cooperative form of organization. The starting point for the analysis was the observation that the cooperative can be expected to have lower contracting or procurement costs than an investor-owned firm (IOF) when its goals and those of the members are in perfect alignment. If the manager is required to redistribute income among the members to maximize some non-utilitarian welfare function, then the co-op’s cost advantage diminishes. In the extreme case where the manager acts in a Rawlsian fashion to maximize the profits of the least well-off member, the cost advantage completely disappears and the output profile of the co-op matches that of the IOF. Otherwise, the cooperative is more efficient than the IOF because the equity-efficiency trade-off calls for less productive distortion than the rent extraction-efficiency trade-off faced by the IOF. Since the co-op generally overproduces relative to the IOF, consumers will typically prefer to purchase from a co-op rather than an IOF. As well, because the output of the co-op depends on the nature of the rent seeking and lobbying that occurs among its members, consumers also have a preference for the nature of this rent seeking. Specifically, consumers will prefer to purchase from a co-op in which the most efficient agents wield the political power. More generally, consumers may not be adverse to agency costs within a cooperative, providing these are the result of successful rent seeking by the most efficient agents. In addition to providing some insights into the importance of goal alignment on the costs of an organization, the paper also shows that the manner in which the output of the agents enters the principal’s objective function can have important results for the nature of the contract between the principal and the agent. Specifically, when the assumption that either the principal’s objective is linear with respect to aggregate production or that the revenue generated from the output of individual agents can be aggregated in an additive way is relaxed, the standard result that the most efficient agent always operates at the first-best level no longer holds. More specifically, it is found that there is “efficiency somewhere in the middle” rather than the usual “efficiency at the top”. The model in this paper serves as an important starting point for additional analyses of cooperative and IOF behavior. Consideration of relational specific assets is important, since as Hendrikse and Veerman (2001) and Sykuta and Cook (2001) argue, the (agricultural) cooperative is more likely to be efficient than an IOF when relationship specific investments by the members are relatively more important than those by the processor. Also of importance is the internal organizational structure of the cooperative and the IOF. This paper has considered a case where the members have provided an organizational centre with the authority to direct their actions via contract prices. Following Hendrikse (2005), Aghion and Tirole (1997) and Baker et al. (1999), it is important to determine the conditions under which the adoption of this sort of structure is advantageous to a cooperative and to an IOF. Finally, to isolate the impact of redistribution activities in a cooperative on its procurement costs and hence efficiency, the paper deliberately did not consider any interaction between the cooperative and the IOF; each were assumed to operate solely on their own. However, in most markets a mixed oligopoly in which cooperatives and IOFs compete is common. This competition between the cooperative and the IOF for markets and members has important implications for the ability of each organizational form to survive. As Albæk and Schultz (1998) demonstrate, the cooperative’s ability to commit credibly to higher output levels can provide it with an advantage over an IOF, while Rey and Tirole (2000) show that an IOF’s strategic choices can destabilize a cooperative, making it less likely to succeed over time. A topic for future research is to examine the implications of membership goals in a cooperative on its ability to compete effectively with an IOF in a mixed duopoly.