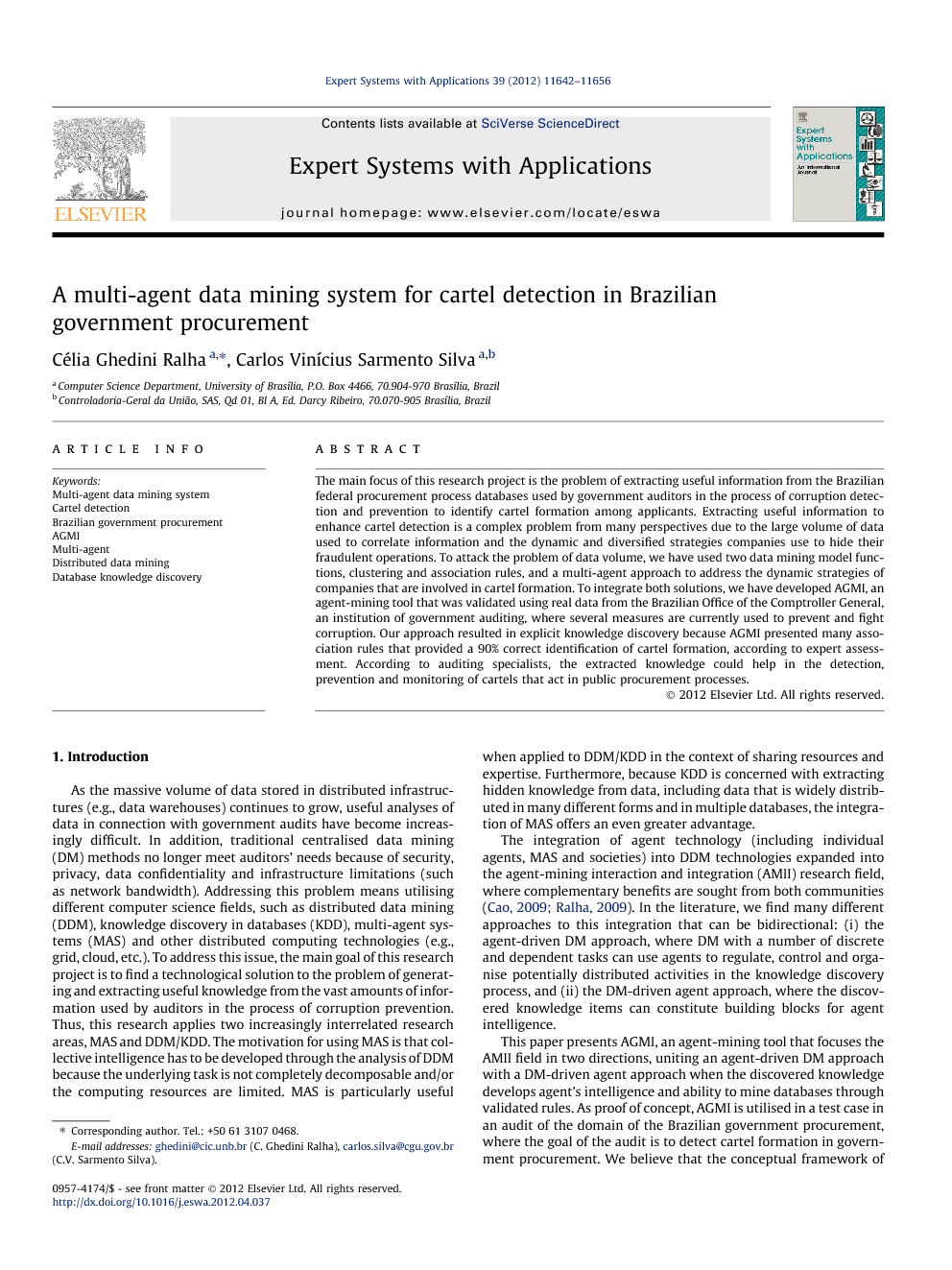 The main focus of this research project is the problem of extracting useful information from the Brazilian federal procurement process databases used by government auditors in the process of corruption detection and prevention to identify cartel formation among applicants. Extracting useful information to enhance cartel detection is a complex problem from many perspectives due to the large volume of data used to correlate information and the dynamic and diversified strategies companies use to hide their fraudulent operations. To attack the problem of data volume, we have used two data mining model functions, clustering and association rules, and a multi-agent approach to address the dynamic strategies of companies that are involved in cartel formation. To integrate both solutions, we have developed AGMI, an agent-mining tool that was validated using real data from the Brazilian Office of the Comptroller General, an institution of government auditing, where several measures are currently used to prevent and fight corruption. Our approach resulted in explicit knowledge discovery because AGMI presented many association rules that provided a 90% correct identification of cartel formation, according to expert assessment. According to auditing specialists, the extracted knowledge could help in the detection, prevention and monitoring of cartels that act in public procurement processes.

As the massive volume of data stored in distributed infrastructures (e.g., data warehouses) continues to grow, useful analyses of data in connection with government audits have become increasingly difficult. In addition, traditional centralised data mining (DM) methods no longer meet auditors’ needs because of security, privacy, data confidentiality and infrastructure limitations (such as network bandwidth). Addressing this problem means utilising different computer science fields, such as distributed data mining (DDM), knowledge discovery in databases (KDD), multi-agent systems (MAS) and other distributed computing technologies (e.g., grid, cloud, etc.). To address this issue, the main goal of this research project is to find a technological solution to the problem of generating and extracting useful knowledge from the vast amounts of information used by auditors in the process of corruption prevention. Thus, this research applies two increasingly interrelated research areas, MAS and DDM/KDD. The motivation for using MAS is that collective intelligence has to be developed through the analysis of DDM because the underlying task is not completely decomposable and/or the computing resources are limited. MAS is particularly useful when applied to DDM/KDD in the context of sharing resources and expertise. Furthermore, because KDD is concerned with extracting hidden knowledge from data, including data that is widely distributed in many different forms and in multiple databases, the integration of MAS offers an even greater advantage. The integration of agent technology (including individual agents, MAS and societies) into DDM technologies expanded into the agent-mining interaction and integration (AMII) research field, where complementary benefits are sought from both communities (Cao, 2009 and Ralha, 2009). In the literature, we find many different approaches to this integration that can be bidirectional: (i) the agent-driven DM approach, where DM with a number of discrete and dependent tasks can use agents to regulate, control and organise potentially distributed activities in the knowledge discovery process, and (ii) the DM-driven agent approach, where the discovered knowledge items can constitute building blocks for agent intelligence. This paper presents AGMI, an agent-mining tool that focuses the AMII field in two directions, uniting an agent-driven DM approach with a DM-driven agent approach when the discovered knowledge develops agent’s intelligence and ability to mine databases through validated rules. As proof of concept, AGMI is utilised in a test case in an audit of the domain of the Brazilian government procurement, where the goal of the audit is to detect cartel formation in government procurement. We believe that the conceptual framework of AGMI is also useful in other domains, as we discuss further in Section 6. The rest of the paper is divided as follows. Section 2 discusses research motivation, while Section 3 briefly presents the MAS and DM areas of research. Section 4 presents an overview of the related work. Section 5 presents the AGMI tool, including its conceptual framework, implementation process and knowledge evaluation aspects. Section 6 outlines the use of AGMI in the Brazilian government procurement test case. Section 7 discusses important aspects of the research, and Section 8 concludes the paper and identifies directions for future work.

Apart from being in charge of inspecting and detecting fraud in the use of federal public funds, the CGU is also responsible for developing mechanisms to prevent corruption. In this direction, the CGU must act proactively to develop a means of preventing the occurrence of corruption. In this context, cartel formation in procurement processes is an important issue of focus. Therefore, in this article we present AGMI, an agent-mining tool that integrates MAS into DDM techniques, and applied it to the Brazilian government procurement domain. AGMI includes the DMA (Weka-based) and JADE frameworks with three architectural levels (strategic, tactical and operational) and four different types of agents (coordinator, evaluator, local mining supervisor and mining). AGMI was defined to apply different DM techniques using a collaborative approach of interaction among agents to work over a distributed environment, with an integrated, intelligent perspective that primarily intends to improve the knowledge discovery process. We tested AGMI as a possible solution to the problem of detecting cartels in public procurements. Many experiments were performed, and the results are presented in Section 6, showing that AGMI is potentially applicable to this problem. The experimental results presented in Fig. 5 and Fig. 6 proved that AGMI performed well with respect to run-time performance and the quality of the rules. The evaluator agent also proved its autonomous aspects by improving the quality of 191 rules through the use of heuristics, where the average rate of improvement of the top ten rules was 56.1% (Table 6). A comparison of the AGMI results with the previous DM techniques approach using rule quality shows that AGMI presents RQ that is always higher than 80%, with the best rule at 100% and the average RQ at approximately 90% (Fig. 6). Several association rules that could indicate evidence for cartel actions in public procurements were discovered, as well as some rules that suggest fraudulent simulations of competition. The findings related to cartel detection were presented to the government official and some of the groups found by the prototype were considered potential cartel in its first analysis. However, in order to proceed with the lawsuit they must gather more consistent evidences, like overcharges in the contracted services, familiar or social bonds between the owners of the companies which make up the suspicious groups. In summary, the knowledge discovery presented in Section 6.2 may assist auditors who work in the Brazilian government to detect and prevent the occurrence of cartels during procurement processes, a very important and prosecutable corruption issue. In future work, we will study other ways of automating the attribute selection and maintaining reduced runtime processing. Toward this goal, we are studying other mechanisms that could improve agent behavior, specifically assigning different degrees of autonomy to them that are associated with other distributed computing infrastructures (e.g., grid, cloud). We also intend to enrich the knowledge discovery process using different heuristics and applying AGMI to other auditing databases. The data mining-driven agent approach described in Section 1 can be used because using the best rules, the knowledge discovered can provide the agents with the intelligence to mine databases using the experts’ validated rules. In this way, fraud detection can be automated. Since 2002, the Brazilian government has adopted an Internet-based reverse auction and all companies that participate of these e-procurements have their bids recorded in ComprasNet databases. As a future work, AGMI could be adapted to analyze on the fly bids and companies in running procurements during the purchase processes. Therewith, any suspicious bid could be detected by AGMI which could send messages to the procurement managers and also to anti-corruption agencies such as the Office of the Comptroller General and the Council for Economic Defense (CADE). Additionally, new AI techniques could be used to enrich the integrated intelligence of our agents, as the use of machine learning algorithms, advancing towards the next-generation MADM systems.