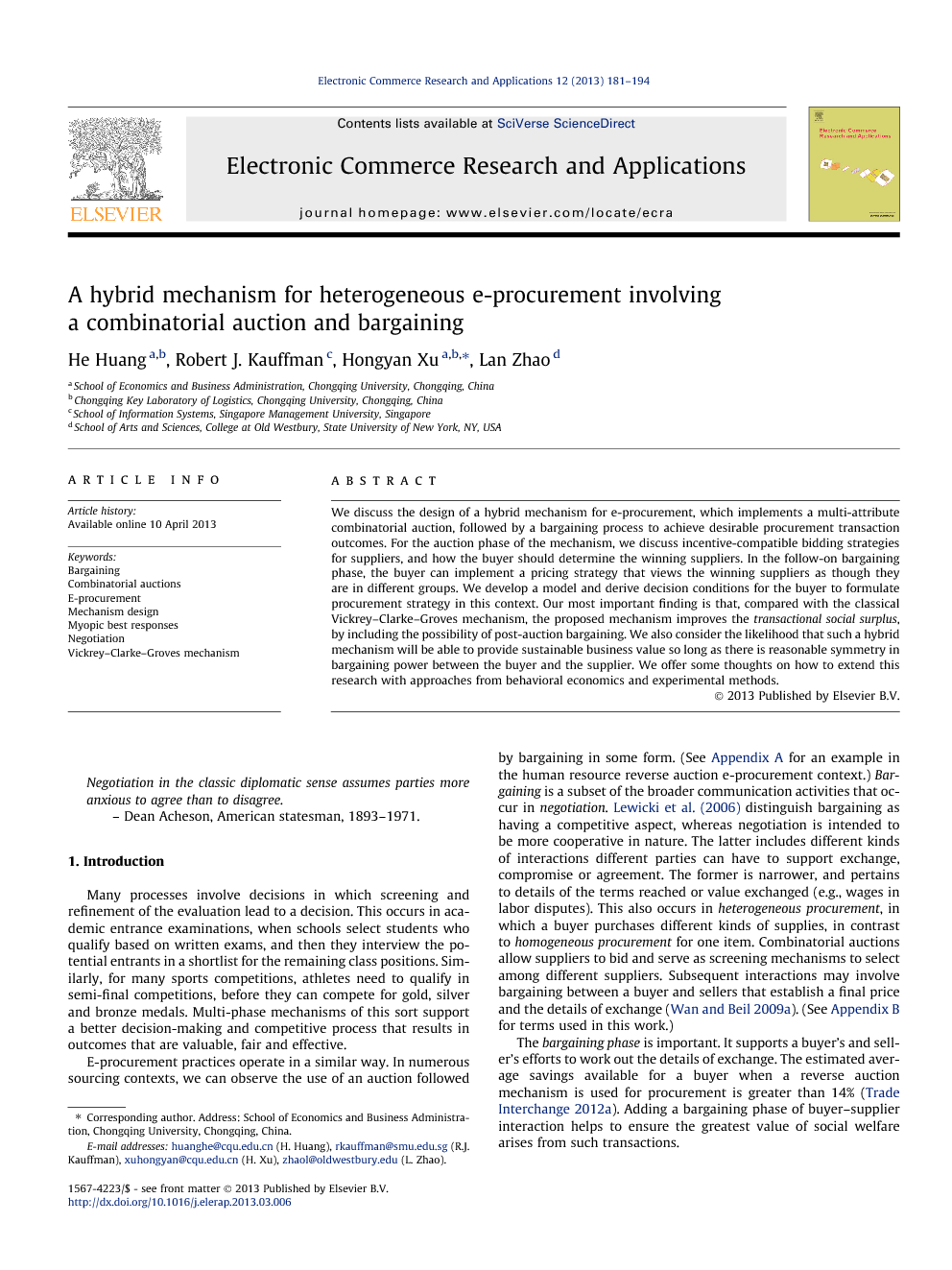 We discuss the design of a hybrid mechanism for e-procurement, which implements a multi-attribute combinatorial auction, followed by a bargaining process to achieve desirable procurement transaction outcomes. For the auction phase of the mechanism, we discuss incentive-compatible bidding strategies for suppliers, and how the buyer should determine the winning suppliers. In the follow-on bargaining phase, the buyer can implement a pricing strategy that views the winning suppliers as though they are in different groups. We develop a model and derive decision conditions for the buyer to formulate procurement strategy in this context. Our most important finding is that, compared with the classical Vickrey–Clarke–Groves mechanism, the proposed mechanism improves the transactional social surplus, by including the possibility of post-auction bargaining. We also consider the likelihood that such a hybrid mechanism will be able to provide sustainable business value so long as there is reasonable symmetry in bargaining power between the buyer and the supplier. We offer some thoughts on how to extend this research with approaches from behavioral economics and experimental methods.

Many processes involve decisions in which screening and refinement of the evaluation lead to a decision. This occurs in academic entrance examinations, when schools select students who qualify based on written exams, and then they interview the potential entrants in a shortlist for the remaining class positions. Similarly, for many sports competitions, athletes need to qualify in semi-final competitions, before they can compete for gold, silver and bronze medals. Multi-phase mechanisms of this sort support a better decision-making and competitive process that results in outcomes that are valuable, fair and effective. E-procurement practices operate in a similar way. In numerous sourcing contexts, we can observe the use of an auction followed by bargaining in some form. (See Appendix A for an example in the human resource reverse auction e-procurement context.) Bargaining is a subset of the broader communication activities that occur in negotiation. Lewicki et al. (2006) distinguish bargaining as having a competitive aspect, whereas negotiation is intended to be more cooperative in nature. The latter includes different kinds of interactions different parties can have to support exchange, compromise or agreement. The former is narrower, and pertains to details of the terms reached or value exchanged (e.g., wages in labor disputes). This also occurs in heterogeneous procurement, in which a buyer purchases different kinds of supplies, in contrast to homogeneous procurement for one item. Combinatorial auctions allow suppliers to bid and serve as screening mechanisms to select among different suppliers. Subsequent interactions may involve bargaining between a buyer and sellers that establish a final price and the details of exchange ( Wan and Beil 2009a). (See Appendix B for terms used in this work.) The bargaining phase is important. It supports a buyer’s and seller’s efforts to work out the details of exchange. The estimated average savings available for a buyer when a reverse auction mechanism is used for procurement is greater than 14% ( Trade Interchange 2012a). Adding a bargaining phase of buyer–supplier interaction helps to ensure the greatest value of social welfare arises from such transactions. Prior work on combinatorial auctions in procurement mainly has considered prices and allocations (Ledyard et al., 2002 and Hohner et al., 2003). Different forms of negotiation or bargaining have not been analyzed as follow-ups to e-procurement auctions. Wang (2000) explored the equilibrium strategy for homogeneous procurement in a two-phase mechanism involving an auction and bargaining. Even though the model was for one-unit purchases, it still was complicated and only explored the properties of the equilibrium. The authors’ work suggested that backward induction often is intractable for the analysis of complicated bidding processes. Also, the model did not treat the buyer’s concerns of supply quality. Some buyers conduct auctions, and then use the information from the auction to negotiate privately with a losing bidder by offering a take-it-or-leave-it price. Salmon and Wilson (2008) have suggested a second-chance offer mechanism, which can generate greater value for the buyer. It has a two-phase mechanism combining an auction with information sharing to enhance the joint payoffs. Others have suggested more complex mechanisms. Nagarajan and Bassok (2008) examined a bargaining framework for decentralized supply chains in which an assembler buys complementary components from many suppliers. The buyer and suppliers act in a sequence: (1) the suppliers form supply coalitions; (2) the coalitions compete for a position in the bargaining sequence; and (3) then the coalitions bargain with the buyer. This process involves multilateral negotiation in a multi-phase mechanism. Pre-qualifying suppliers based on the quality of supplies they can deliver is costly though. Wan and Beil (2009a) allowed suppliers to delay the qualification process until after the auction. This is post-qualification. Tunca and Wu (2009) considered a two-phase auction process too. In the first phase, the buyer uses an auction to select the most competitive group of suppliers. In the second, the buyer adjusts the quantity and price paid to each supplier via a bargaining process. This enhances the value of the auction outcomes ( Wan and Beil 2009b). 1 We will analyze a setting in which a buyer wishes to procure heterogeneous goods with consideration given to what is an efficient level of quality. We design a hybrid mechanism involving an auction and bargaining. Our proposed approach includes a multi-attribute combinatorial auction, followed by bargaining on payments to ensure that the procurement transaction will finish. In the auction phase, the buyer will select a set of winners in a combinatorial auction, and establish supply allocations for the selected suppliers, based on a targeted level of supply quality. Due to information asymmetry, the buyer will not know the cost of the various sellers’ supplies at the outset. In addition, because of the computational complexity of the mechanism, the buyer will face a winner determination problem. The buyer’s goal is to maximize transactional social surplus. It can accomplish this by achieving the best level of allocation efficiency: the marginal benefits of supplies should be equal to the marginal costs of production. In the bargaining phase, an equilibrium will occur when the time value of the payments the supplier receives is considered, and the true production costs of the winning suppliers. The buyer has two options: (1) making an exchange with a supplier that include payments to recognize the transaction price established by the auction or (2) developing a workable price with post-auction bargaining. We will show that the key decision criterion for the buyer’s best procurement strategy is tied to different types of winning suppliers. Compared to the Vickrey–Clarke–Groves (VCG) mechanism, our hybrid mechanism improves transactional social surplus, and supports transaction-making when the VCG mechanism fails to do so.

In this article, we analyzed a scenario in which a buyer wishes to procure heterogeneous goods from many potential suppliers. Each supplier will bid its true cost of producing the supply bundle. We proposed a two-phase hybrid mechanism that includes a multi-attribute combinatorial auction phase followed by a bargaining phase with the winners of the auction. For our model, we have shown that the auction phase achieves maximum social surplus and incentive compatibility. For the bargaining phase, we established a unique equilibrium price, reflecting the payments that the buyer will need to give to the suppliers. For any winning supplier, we found that the difference between the buyer’s profit in the auction and the bargaining phase decreases in the size of the transactional social surplus created by the individual suppliers. We also investigated two different types of winning suppliers in procurement. With respect to the buyer’s problem to maximize profit, we presented a set of decision conditions related to different procurement strategies according to the different types of winning suppliers. Compared with the VCG mechanism, our proposed hybrid mechanism has the potential to measurably improve transactional social surplus: the likelihood of a transaction increases when social surplus of the transaction is small. We conclude that an integrated auction and bargaining mechanism will achieve transaction-making success for some transactions that will fail under the VCG mechanism.6 Mechanism design research of the kind that we have demonstrated here is an important area for advances in e-commerce research, although it applies to many other IS and IT-related issues, including keyword advertising and Internet search, IT services pricing and contracts, data security investment evaluation, and mechanisms for information sharing in social networks. We expect that advances in this area will be important in both theoretical and applied ways, to academic researchers and industry professionals who are interested in achieving a deeper understanding of how to configure processes involving IT when economic value has the potential to be created, destroyed, acquired, changed or shared. The relevance of this work, we believe, goes beyond the narrower issues associated with the operations of a combinatorial auction that includes a next-phase negotiation process, where our innovations were developed. The results we have developed for a two-phase hybrid auction and bargaining mechanism are founded on a critical assumption that there is a reasonable, if not perfectly equal balance of bargaining power between the buyer and the suppliers who are selected as winners. In the present research, this was possible, in part, because of the incentive that suppliers have in the first-phase auction to honestly reveal their true production costs when they make a supply allocation bid. Future research can be conducted to explore the extent to which an imbalance of bargaining power makes the two-phase hybrid mechanism fragile in terms of its ability to create benefits in bargaining that will accrue to the supplier and not just the buyer. No suppliers will want to go beyond the auction if there isn’t additional value for them, beyond the greater likelihood of the completion of a transaction. That is not a complete goal for the supplier, which will want to have some assurance that the outcome from bargaining will be a meeting point for value sharing, rather than an outcome that is largely shaped by the buyer’s power. In addition to using economic modeling approaches to examine these issues, it also would be interesting to craft behavioral economics experiments to evaluate the salient aspects of variations in bargaining power from the point of view of the supplier’s willingness to transact, and the different levels of social surplus that arise from the hybrid mechanism. Such follow-on research is likely to lead to new knowledge that will further enrich our understanding of multi-stage mechanism designs in electronic procurement, and supply innovations in other areas, such as IT services and IT human capital sourcing (Bardhan et al. 2010).