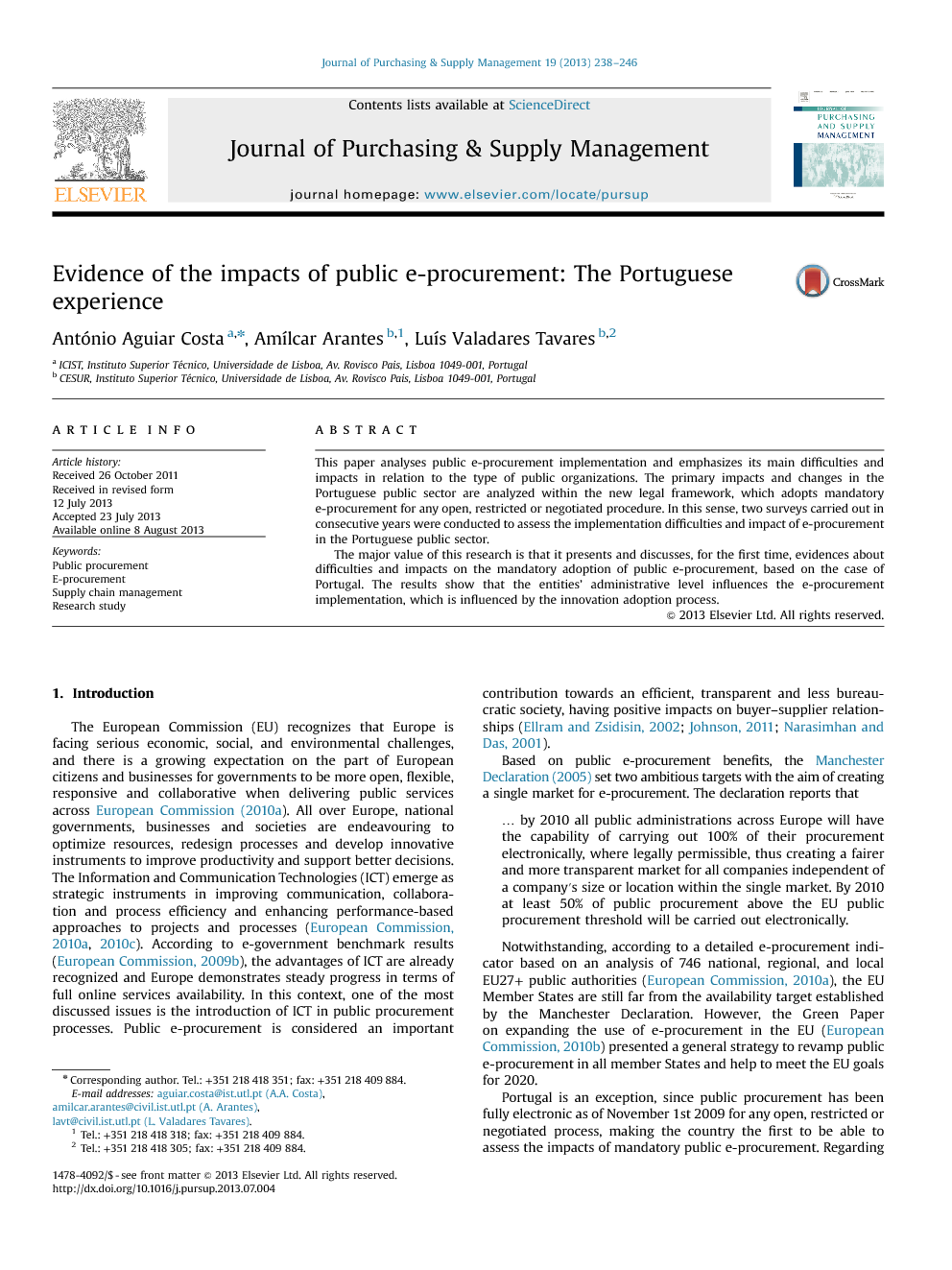 The European Commission (EU) recognizes that Europe is facing serious economic, social, and environmental challenges, and there is a growing expectation on the part of European citizens and businesses for governments to be more open, flexible, responsive and collaborative when delivering public services across European Commission (2010a). All over Europe, national governments, businesses and societies are endeavouring to optimize resources, redesign processes and develop innovative instruments to improve productivity and support better decisions. The Information and Communication Technologies (ICT) emerge as strategic instruments in improving communication, collaboration and process efficiency and enhancing performance-based approaches to projects and processes (European Commission, 2010a and European Commission, 2010c). According to e-government benchmark results (European Commission, 2009b), the advantages of ICT are already recognized and Europe demonstrates steady progress in terms of full online services availability. In this context, one of the most discussed issues is the introduction of ICT in public procurement processes. Public e-procurement is considered an important contribution towards an efficient, transparent and less bureaucratic society, having positive impacts on buyer–supplier relationships (Ellram and Zsidisin, 2002, Johnson, 2011 and Narasimhan and Das, 2001). Based on public e-procurement benefits, the Manchester Declaration (2005) set two ambitious targets with the aim of creating a single market for e-procurement. The declaration reports that … by 2010 all public administrations across Europe will have the capability of carrying out 100% of their procurement electronically, where legally permissible, thus creating a fairer and more transparent market for all companies independent of a company′s size or location within the single market. By 2010 at least 50% of public procurement above the EU public procurement threshold will be carried out electronically. Notwithstanding, according to a detailed e-procurement indicator based on an analysis of 746 national, regional, and local EU27+ public authorities (European Commission, 2010a), the EU Member States are still far from the availability target established by the Manchester Declaration. However, the Green Paper on expanding the use of e-procurement in the EU (European Commission, 2010b) presented a general strategy to revamp public e-procurement in all member States and help to meet the EU goals for 2020. Portugal is an exception, since public procurement has been fully electronic as of November 1st 2009 for any open, restricted or negotiated process, making the country the first to be able to assess the impacts of mandatory public e-procurement. Regarding the Portuguese case, the European Commission, 2010a and European Commission, 2010b mentioned that: Overall take-up, both within most countries and across the EU as a whole, remains low and is estimated to be less than 5% of total procurement by value. The exception to this low use is Portugal, where the use of electronic means to conduct the procurement phases up until contract award has been mandatory since 1 November 2009 for most public purchases. Making the most of this opportunity, two national surveys have been conducted – during the transition period and after e-procurement became mandatory – focusing on public e-procurement implementation and the impacts thereof. The research work took different types of public entities into consideration in order to capture different behaviours facing ICT diffusion and impacts (Agarwal and Prasad, 1999 and Esposito and Mastroianni, 2002). By evidencing the perceptions of public contracting authorities (PCAs) and the dynamics of e-procurement adoption in the case of Portugal, this work contributes to expanding knowledge about public e-procurement and highlighting the challenges in terms of implementation and impacts on PCAs. Through these surveys, this paper aims to answer the following research questions: what are the major implementation difficulties and impacts of e-procurement for PCAs? And how does the PCAs’ perception of e-procurement change over time? In order to reduce the scope of the main research question, several hypotheses were formulated based on existing literature (Croom and Brandon-Jones, 2007, 2005; Johnson, 2011; McConnell et al., 2010; Vaidya et al., 2006): e-procurement increases transparency and competition among suppliers and reduces bureaucracy, procedure durations and overall costs; the e-procurement implementation difficulties and impacts depend on the administrative level of PCAs; and the lack of skilled human resources and ICT restricts e-procurement implementation.

The public sector has undergone significant changes in recent years and the implementation of electronic services has made a positive contribution to these transformations. Electronic solutions are currently reaching many different government services and are already showing significant improvements. Among the several existing e-government solutions, e-procurement has attracted most of the attention primarily because public procurement accounts for a significant percentage of national GDP, and so any savings represent considerable gains. Consequently, the adoption of public e-procurement has been pursued as a strategic public policy by the European Union since 2005, and Portugal was the first case of mandatory adoption for all open, restricted or negotiated processes. This makes Portugal an interesting case study that can provide important insight into the widespread implementation of public e-procurement. The surveys presented herein not only made it possible to understand the major difficulties and impacts of e-procurement and the most important challenges to e-procurement implementation, but also provided a perspective on public sector behaviour over time, as the first survey was conducted in a preliminary phase of e-procurement implementation in the public sector and the second was conducted after almost one year of mandatory e-procurement. The surveys also provided insight into how the type of public contracting authority influences their perception on e-procurement, which is a relevant contribution to the existing literature on public e-procurement. Based on the results it was possible to test the hypotheses and answer the research questions that motivated the research work. The major conclusions are: • Comparing the mean impacts of e-procurement, one can say that the results align with the positive expectations created by the literature. The results indicate that the overall perception is positive. The “Impact on transparency” emerges as the highest impact in both years, showing that e-procurement definitively increases process transparency, and no negative perceptions were found. Comparing the results of the two surveys, with a 5% statistical significance, only two differences can be identified between 2009 and 2010, regarding “Impact on competition” and “Impact on bureaucracy”, and for both impacts the 2009 survey shows more optimistic responses. This may be explained by the fact that in 2009 e-procurement was not mandatory and, therefore, the PCAs that adopted it could be those that are more enthusiastic about innovation; • Throughout the research it was interesting to note that different administrative levels have different opinions on public e-procurement, which corroborates the findings of McConnell et al. (2010). In general, LA entities reported higher positive impacts than the other administrative levels and experienced fewer difficulties in comparison to DA and IA entities. This different behaviour may be explained by the fact that the LA entities are not subordinated or supervised by the central government, contrary to the DA and IA entities. They thus have a simplified decision making structure which may contribute to reducing e-procurement implementation difficulties; • The impact of e-procurement in terms of organizational structure, the need for more technical experts and ICT investment, is limited. However, training emerged as a crucial factor, as discussed in the literature. Based on these conclusions it is relevant to emphasize that public entities should be aware of the importance of simplifying their decision making structures when facing innovation adoption, particularly the adoption of e-procurement, in order to achieve better results. Training should also be generally encouraged. In general, the Portuguese phased e-procurement implementation strategy was positive and is, therefore, to be recommended; the adoption of e-procurement in the first year was optional, which led to positive perceptions since the beginning, mainly because only those more receptive to innovation had implemented e-procurement. This positive momentum may have contributed favourably to the second and mandatory year of the e-procurement implementation strategy, which involved less receptive and later adopters, by generating an optimistic perspective on e-procurement implementation. A major limitation of this research work is the type of survey chosen. It was an electronic survey, distributed by email, which usually results in low response rates. No incentive and no follow up has been considered, however the answers obtained were distributed according to the population distribution (in terms of administrative levels), which may indicate that the nonresponse bias is to some extent limited. In terms of further development, it will be interesting to conduct a third survey in order to analyze the impact of public e-procurement in a more mature stage of e-procurement use, where initial barriers to entry will, hopefully, have been completely overcome.