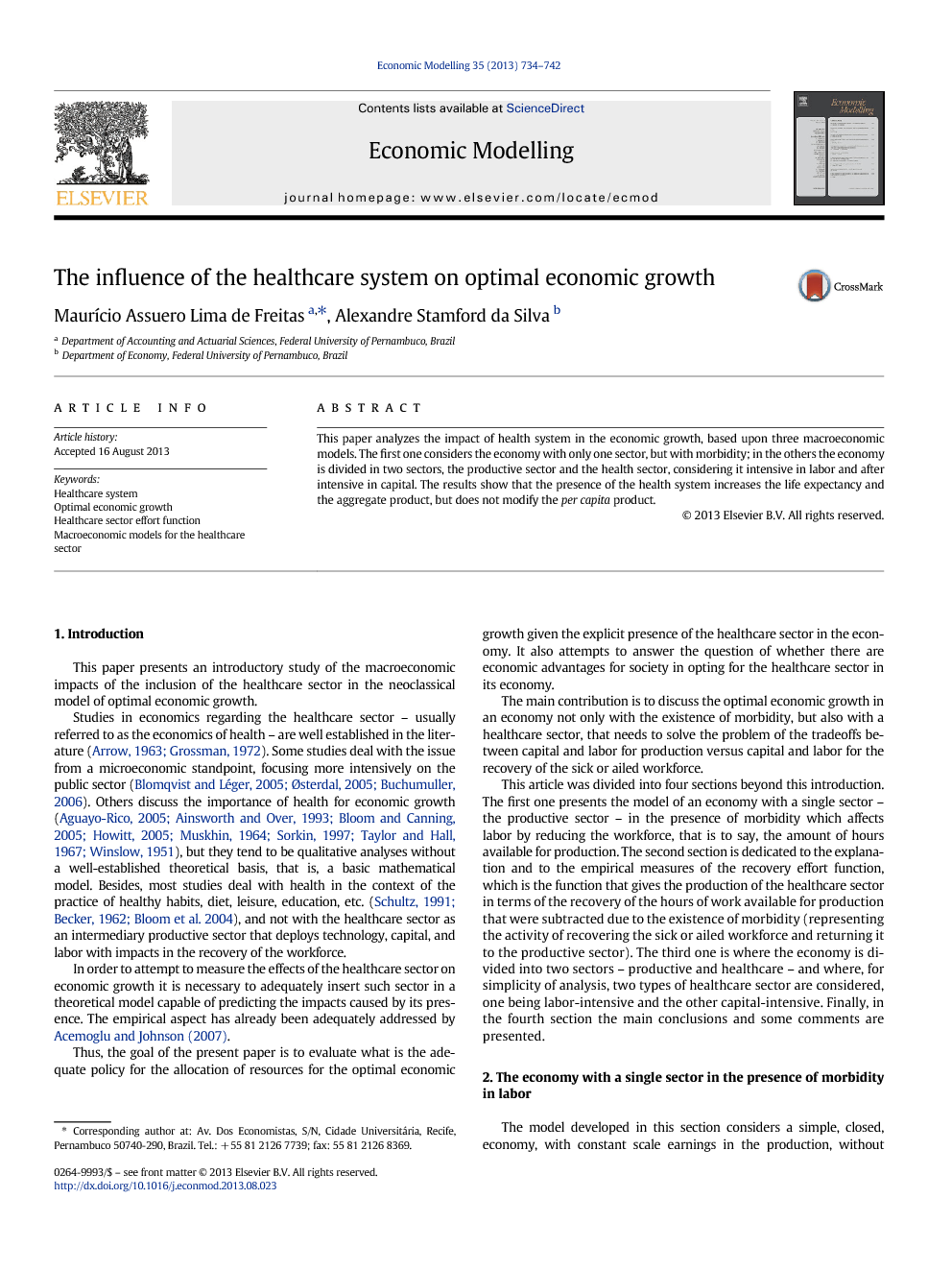 This paper analyzes the impact of health system in the economic growth, based upon three macroeconomic models. The first one considers the economy with only one sector, but with morbidity; in the others the economy is divided in two sectors, the productive sector and the health sector, considering it intensive in labor and after intensive in capital. The results show that the presence of the health system increases the life expectancy and the aggregate product, but does not modify the per capita product.

The model in which the economy has only one sector brings results similar to the economic growth models with exhaustible resources. In this model, it was found that the existence of a BGP is assured as long as it is true that n > m or, if that does not happen, it is necessary that g > β(m − n). The insertion of the healthcare sector immediately modifies the labor movement equation that now begins to decay into a smaller rate, that is, the presence of the healthcare sector increases people's life expectancy, but this increase in life expectancy does not change the growth rate of the per capita consumption, View the MathML sourceg∗=g1−α, that depends, with or without the healthcare sector, on the rate of technology of the productive system and on the elasticity of the product in relation to the capital (or of the product in relation to the labor, given that 1 − α = β). This result does not change whether the effort function of the healthcare sector is labor-intensive or capital-intensive, and this can suggest some level of inoperance for the healthcare sector, however, the theoretical result obtained here is corroborated by the empirical results found by Acemoglu and Johnson (2007) who studied the impact of illness on economic development and, using a regression analysis, showed that there is no evidence that the increase in life expectancy, the main result of the healthcare sector, had any influence over the growth in per capita income. One of the results of the work is to highlight that the healthcare sector increases society's well-being because the aggregated product is greater than the aggregate product of an economy with morbidity and without a healthcare system. Therefore, one obtains a result contrary to that of Thomas Malthus (1798), who advocated the positive control of the population suggesting the construction of houses close to mangroves and the narrowing of streets in order to provoke the return of plagues, saying that: … but above all we must repudiate specific medicine for overwhelming diseases …. Ehrlich and Lui (1997), referring to Malthus, said: “Malthus dramatized the idea by identifying population as potentially detrimental to growth. Since that time, work on growth and development has been inextricably linked with population economics”. The authors trace the evolution of the literature on population growth until the recent endogenous growth theory and development and propose a model of dynasty. The results are important, but the approach is different from ours. Here we show that the health system as a productive sector of the economy, has no impact on the increase in per capita income, but it is of fundamental importance in social welfare because it contributes to the increase in life expectancy of people. The models presented here show that Malthus was wrong, for, even if the healthcare sector approaches the effect of snake oil, it brings positive results for the economic system. The present work does not deal with an effort function based simultaneously on capital and labor, due to the initial difficulty in expressing a functional form for the healthcare sector that can be both of the Cobb–Douglas and of the fixed proportions type, allowing for some level of substitution between factors. It also does not consider the randomness of the illness, a fact that would force an analysis in light of dynamic programming. Finally, the endogenization of technology is not done, in spite of the importance of technology for the existence of BGP.