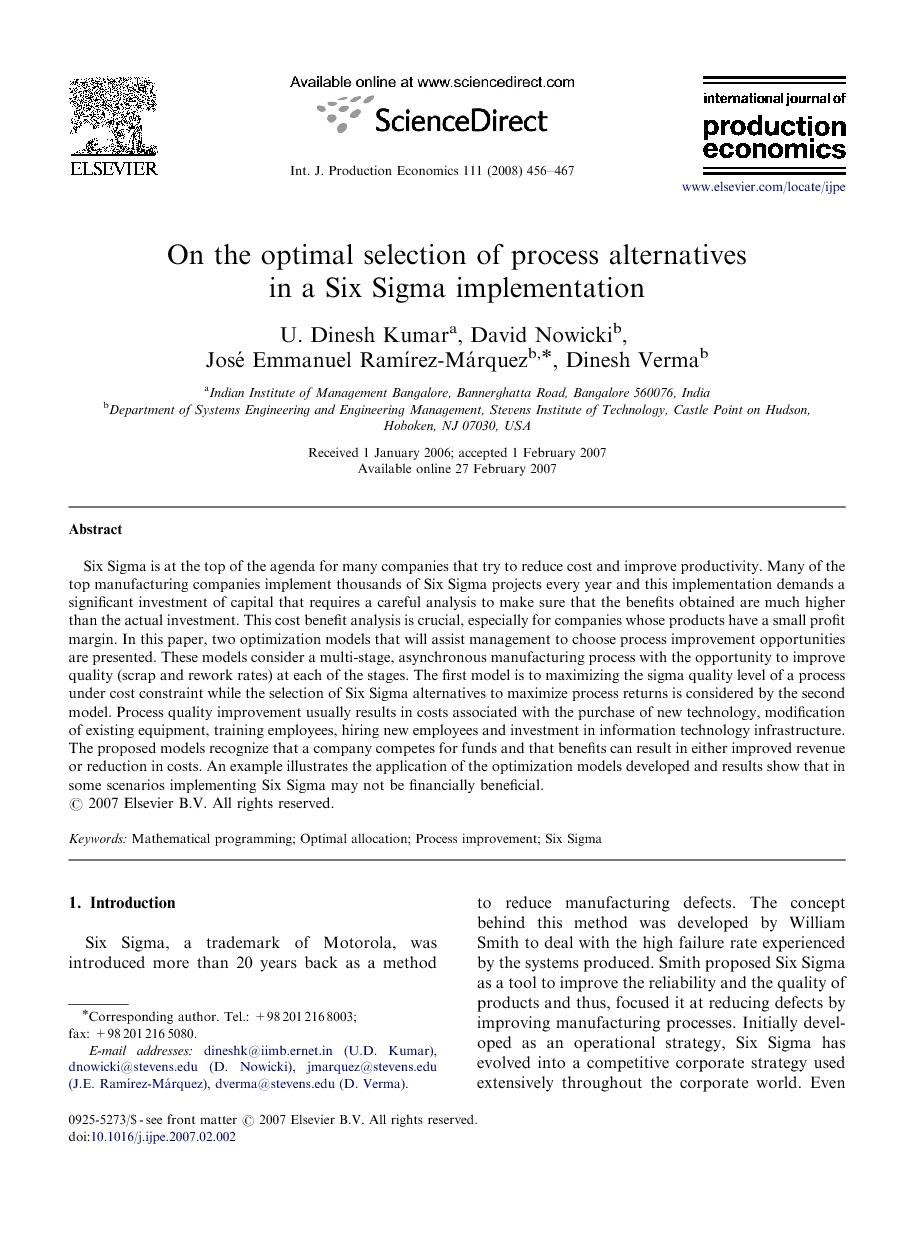 Six Sigma is at the top of the agenda for many companies that try to reduce cost and improve productivity. Many of the top manufacturing companies implement thousands of Six Sigma projects every year and this implementation demands a significant investment of capital that requires a careful analysis to make sure that the benefits obtained are much higher than the actual investment. This cost benefit analysis is crucial, especially for companies whose products have a small profit margin. In this paper, two optimization models that will assist management to choose process improvement opportunities are presented. These models consider a multi-stage, asynchronous manufacturing process with the opportunity to improve quality (scrap and rework rates) at each of the stages. The first model is to maximizing the sigma quality level of a process under cost constraint while the selection of Six Sigma alternatives to maximize process returns is considered by the second model. Process quality improvement usually results in costs associated with the purchase of new technology, modification of existing equipment, training employees, hiring new employees and investment in information technology infrastructure. The proposed models recognize that a company competes for funds and that benefits can result in either improved revenue or reduction in costs. An example illustrates the application of the optimization models developed and results show that in some scenarios implementing Six Sigma may not be financially beneficial.

This paper underscores the need to perform both economic and non-economic analyses to evaluate the value of selecting competing quality improve- ment alternatives. Far too often corporations, based upon other companies or industries experience, rush into implementing quality improvements to their existing processes without quantifying the economic consequences. Experience has shown that the initial, perceived euphoria of implementing a Six Sigma initiative, e.g., can bear little resemblance to its resulting economic consequences. Six Sigma con- tinues to be a predominate target to try and obtain a competitive advantage. However, not all companies are successful in implementing many of these quality improvement strategies. Although many companies attribute their success to following a quality improvement program such as TQM and Six Sigma, there are a significant number of companies that fail to gain any measurable benefit after implementing these quality strategies. Given that quality improvements are far reaching and potentially costly, this paper introduced and developed two economic-based mathematical mod- els to assist managers in making the decision on what, if any, quality improvement alternatives to implement. The objective of this paper is to develop mathematical models that can be used to select the process improvement techniques in an optimal way. Two mathematical programming models have been developed in the paper, one finds an optimal sigma quality level using yield as a surrogate revenue measure and another model maximizes the profit from a Six Sigma project by selecting the best processes for Six Sigma implementation. An illustrative example is used to show how the mathematical models developed in the paper can be used in practice. Additional research is required to develop models that fully capture the economic advantages of Six Sigma, most notably increasedmarket share, apart from reduction in wastage cost. Once the relationship between benefit due to improved quality of a manufacturing process and a higher sigma level is established, one can modify the optimization models presented in this paper.