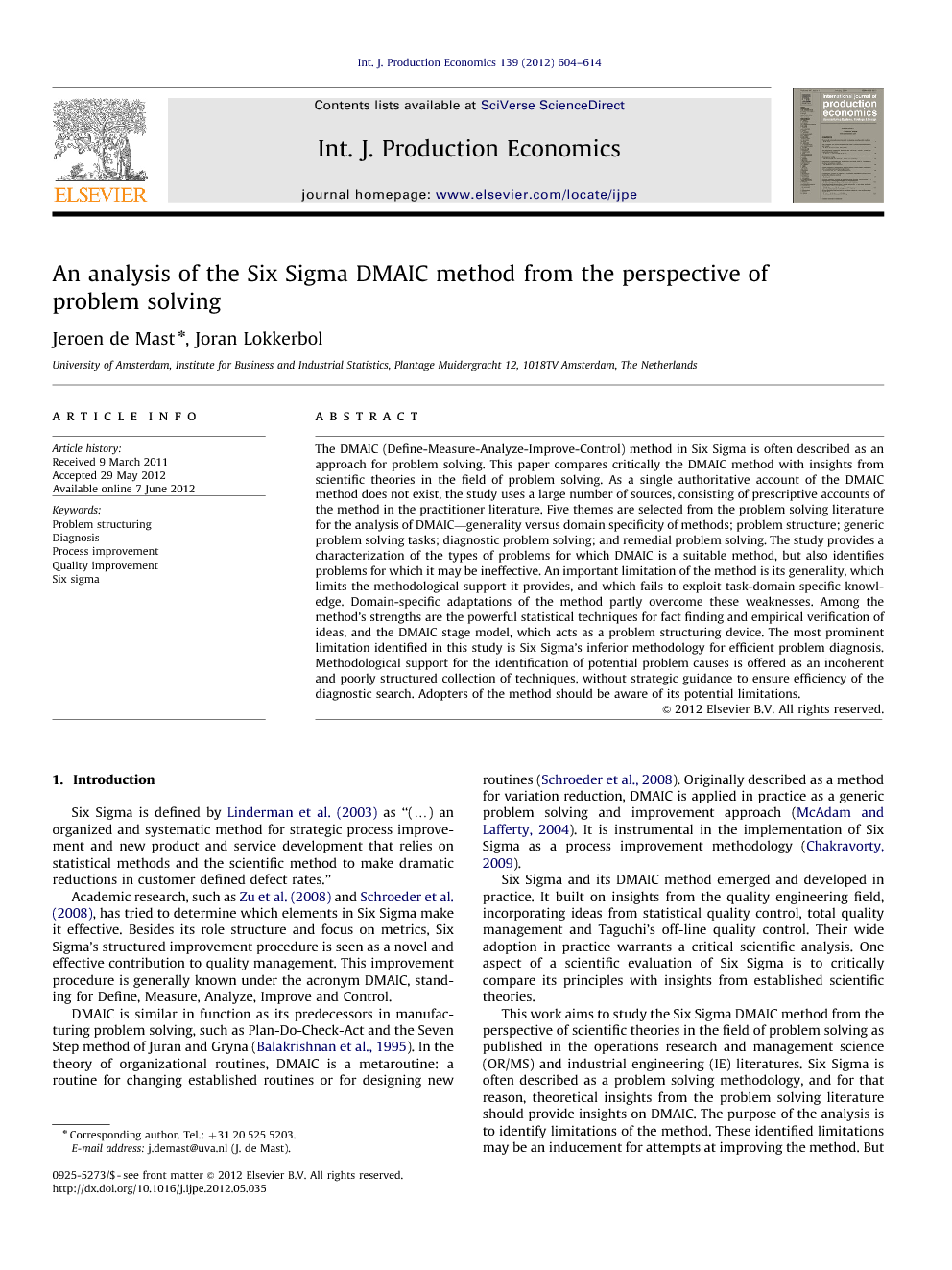 The DMAIC (Define-Measure-Analyze-Improve-Control) method in Six Sigma is often described as an approach for problem solving. This paper compares critically the DMAIC method with insights from scientific theories in the field of problem solving. As a single authoritative account of the DMAIC method does not exist, the study uses a large number of sources, consisting of prescriptive accounts of the method in the practitioner literature. Five themes are selected from the problem solving literature for the analysis of DMAIC—generality versus domain specificity of methods; problem structure; generic problem solving tasks; diagnostic problem solving; and remedial problem solving. The study provides a characterization of the types of problems for which DMAIC is a suitable method, but also identifies problems for which it may be ineffective. An important limitation of the method is its generality, which limits the methodological support it provides, and which fails to exploit task-domain specific knowledge. Domain-specific adaptations of the method partly overcome these weaknesses. Among the method's strengths are the powerful statistical techniques for fact finding and empirical verification of ideas, and the DMAIC stage model, which acts as a problem structuring device. The most prominent limitation identified in this study is Six Sigma's inferior methodology for efficient problem diagnosis. Methodological support for the identification of potential problem causes is offered as an incoherent and poorly structured collection of techniques, without strategic guidance to ensure efficiency of the diagnostic search. Adopters of the method should be aware of its potential limitations.

Six Sigma is defined by Linderman et al. (2003) as “(…) an organized and systematic method for strategic process improvement and new product and service development that relies on statistical methods and the scientific method to make dramatic reductions in customer defined defect rates.” Academic research, such as Zu et al. (2008) and Schroeder et al. (2008), has tried to determine which elements in Six Sigma make it effective. Besides its role structure and focus on metrics, Six Sigma's structured improvement procedure is seen as a novel and effective contribution to quality management. This improvement procedure is generally known under the acronym DMAIC, standing for Define, Measure, Analyze, Improve and Control. DMAIC is similar in function as its predecessors in manufacturing problem solving, such as Plan-Do-Check-Act and the Seven Step method of Juran and Gryna (Balakrishnan et al., 1995). In the theory of organizational routines, DMAIC is a metaroutine: a routine for changing established routines or for designing new routines (Schroeder et al., 2008). Originally described as a method for variation reduction, DMAIC is applied in practice as a generic problem solving and improvement approach (McAdam and Lafferty, 2004). It is instrumental in the implementation of Six Sigma as a process improvement methodology (Chakravorty, 2009). Six Sigma and its DMAIC method emerged and developed in practice. It built on insights from the quality engineering field, incorporating ideas from statistical quality control, total quality management and Taguchi's off-line quality control. Their wide adoption in practice warrants a critical scientific analysis. One aspect of a scientific evaluation of Six Sigma is to critically compare its principles with insights from established scientific theories. This work aims to study the Six Sigma DMAIC method from the perspective of scientific theories in the field of problem solving as published in the operations research and management science (OR/MS) and industrial engineering (IE) literatures. Six Sigma is often described as a problem solving methodology, and for that reason, theoretical insights from the problem solving literature should provide insights on DMAIC. The purpose of the analysis is to identify limitations of the method. These identified limitations may be an inducement for attempts at improving the method. But some limitations may be inherent to DMAIC, as it is not plausible that a strong method can be applicable without restrictions in all circumstances. In those cases, the practical value of identified limitations is that they provide a basis for advising users when the DMAIC method is suited. Since an authoritative or uniform account of the DMAIC method does not exist, we have worked with a large number of sources, varying in degrees of quality, clarity and coverage. In the next section, we describe the sources we have used to obtain a carefully balanced understanding and rendering of the DMAIC procedure. We also outline our approach for studying DMAIC from the perspective of a number of themes in the problem solving literature. The subsequent sections treat these themes, and each formulates a number of conclusions. In Section 8, we seek to integrate the individual conclusions into a comprehensive characterization of DMAIC as a problem solving method.

We start this concluding section by pointing out the most important limitation of this research. In this study, we conceive of DMAIC as a problem solving method, and analyze it from that perspective. We claim that this perspective gives useful insightsand results in useful conclusions about the method, but we emphasize that this perspective is by no means exclusive, and other perspectives (for instance, the goal-theoretic perspective chosen in Linderman et al., 2003 ) may result in equally interesting conclusions. The seven major conclusions of our studies have been pre- sented in the preceding sections. Here we seek to integrate this set of conclusions into a comprehensive view on DMAIC as a problem solving method. Our study has brought to light some characteristics of problem tasks for which DMAIC may be a suitable method. DMAIC is applicable to empirical problems ranging from well-structured to semi-structured, but not to ill-structured problems or pluralistic messes of subjective problems ( people problem solving , in the framework used in the paper). DMAIC is suitable for rather extensive problem solving tasks, requiring all of the components of problem definition, diagnosis, and the design of remedies. It is less suited for problem tasks of a smaller scope. Six Sigma is a generic method. The advantage of such methods is that they are versatile. The disadvantage is that task-domain specific methods can be more powerful because they can be more specific and operational in the guidance they can provide. Task- domain specific methods can also benefit from advanced task- specific domain knowledge, which we found to be absent in generic accounts of Six Sigma. Domain specific elaborations of DMAIC partly overcome these weaknesses inherent to general methods. The limitations of generic versions of DMAIC are not generally recognized in the practitioners’ literature. An exception is Goh (2010) , who mentions as the first out of a number of ‘Six Sigma tragedies’: ‘‘The belief that Six Sigma (as typical Black Belts know it) is universally applicable’’, and thus, that mastery of DMAIC obviates domain-specific expertise. Six Sigma has its origin in quality engineering, which has traditionally had a strong emphasis on statistical methods. For example, ASQ (2007a) suggests that around 45% of the questions in the ASQ’s Black Belt exam are about statistical concepts and techniques, as are, for example, 55% of the pages in a book on Six Sigma techniques such as Pyzdek (2003) . Even in books on Lean Six Sigma, statistical techniques are dominant. For example, 45% of the pages in George et al. (2004) are devoted to statistics. The strong basis in statistical methodology provides strength to the method, which offers powerful techniques for fact finding and empirical testing of ideas before they are accepted. It is also responsible for some of the limitations of the method, in that methods originating in fields other than statistics are under- represented. For example, SPC (statistical process control) tech- niques are emphasized for process control, but PID (proportional- integral-derivative) controllers ( Box et al., 2009 ), which originate in the field of control engineering, are virtually absent in the method’s toolbox. Statistical techniques for empirical model building, such as the theory of the design and analysis of experiments, are emphasized, while other methods for model building, such as the finite element method ( Reddy, 2005 )or techniques from operations research, that may be more appro- priate in many situations, are not offered as alternatives. The strong and somewhat one-sided origins in statistics may also be responsible for the unsatisfactory methodological support that DMAIC offers for efficient problem diagnosis. We propose that in this respect, it should be considered inferior to competing problem solving methodologies in industrial engineering, such as Shainin’s ( Steiner et al., 2008 ) and Kepner and Tregoe’s ( Kepner and Tregoe, 1997 ) problem solving approaches. One of the acclaimed strengths of Six Sigma is its structured method ( Zu et al., 2008 ; Schroeder et al., 2008 ). Reasoning from the perspective of problem solving, we note that the DMAIC model functions as a problem structuring device. It breaks down aproblem solving task into a sequence of generic subtasks, repre- sented and defined by the Define-Measure-Analyze-Improve- Control stages. More detailed accounts break down these subtasks into more specific deliverables (see the generic steps in Table 1 ). Deliverables and subtasks, finally, are associated to problem solving techniques, such as gage R&R studies, process capability analysis and design and analysis of experiments (see De Koning and De Mast, 2006 ). In this fashion, the DMAIC procedure helps a user to find a strategy for analyzing and solving a problem, and thus structure the problem at hand. We believe that adopters of Six Sigma methodology and the DMAIC problem solving approach should be aware of their characteristics and potential limitations. This paper has high- lighted the characteristics of the DMAIC approach and its limita- tions, specifically from a problem solving perspective. In addition, the paper has pinpointed directions where the approach may be improved