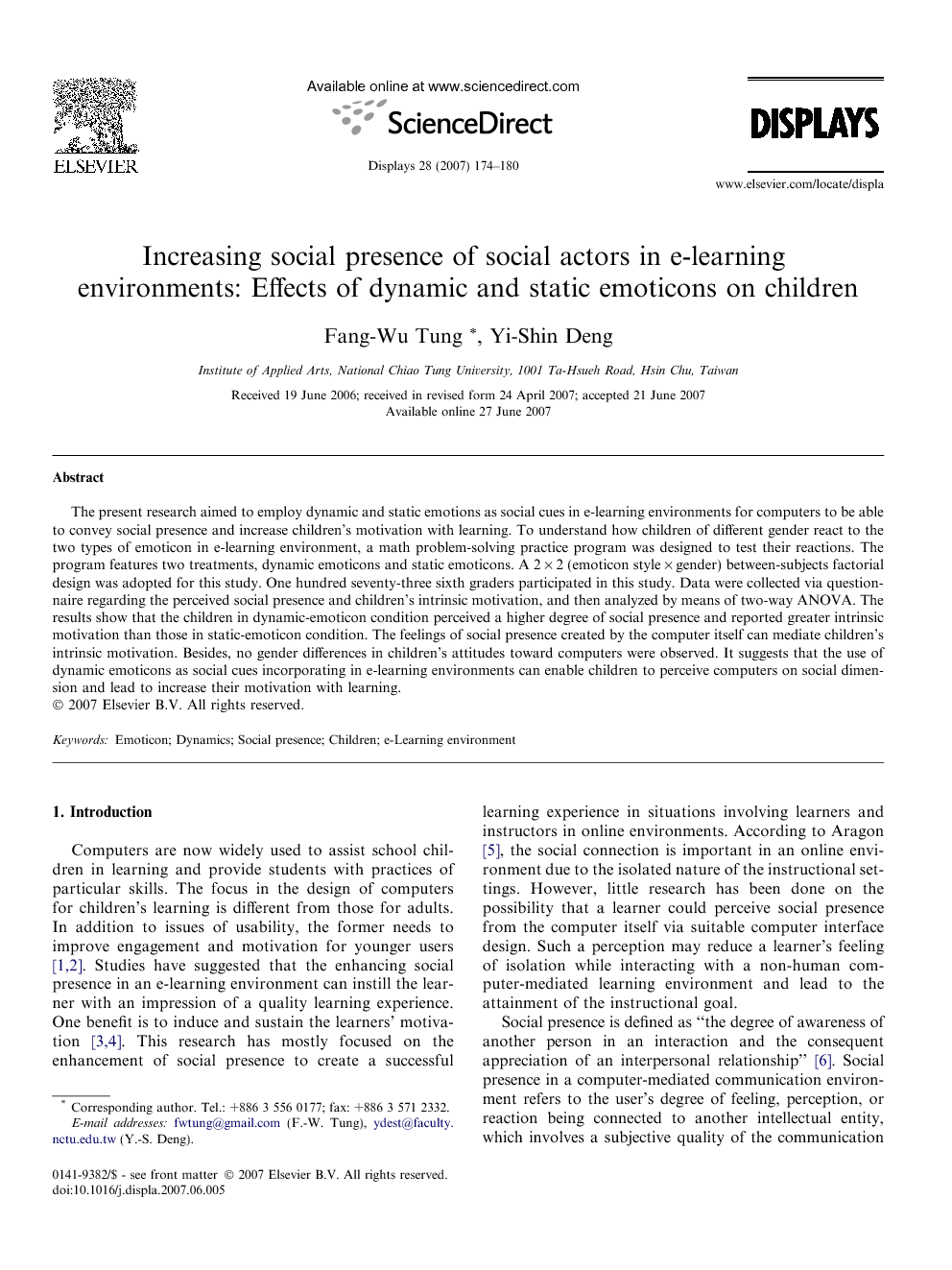 The present research aimed to employ dynamic and static emotions as social cues in e-learning environments for computers to be able to convey social presence and increase children’s motivation with learning. To understand how children of different gender react to the two types of emoticon in e-learning environment, a math problem-solving practice program was designed to test their reactions. The program features two treatments, dynamic emoticons and static emoticons. A 2 × 2 (emoticon style × gender) between-subjects factorial design was adopted for this study. One hundred seventy-three sixth graders participated in this study. Data were collected via questionnaire regarding the perceived social presence and children’s intrinsic motivation, and then analyzed by means of two-way ANOVA. The results show that the children in dynamic-emoticon condition perceived a higher degree of social presence and reported greater intrinsic motivation than those in static-emoticon condition. The feelings of social presence created by the computer itself can mediate children’s intrinsic motivation. Besides, no gender differences in children’s attitudes toward computers were observed. It suggests that the use of dynamic emoticons as social cues incorporating in e-learning environments can enable children to perceive computers on social dimension and lead to increase their motivation with learning.

Learning is a social activity that requires a close connection to achieve better quality. Thus, attention must be paid to the social demand of the pupil in the design of computerized learning. Creating a social interface for an e-learning environment can help counterbalance the negative effects that the lifeless computer environment may have on children. Incorporating social cues adopted from human-to-human interaction into human-to-computer interaction can intensify the sense of social presence and generate a strong connection. This study provides empirical support for the claim that children’s attitudes towards a computer and computer-mediated learning can be affected by the social cues provided by a computer. The use of dynamic emoticons in the computer interface brings the human-to-computer interaction to a level more sociable. Such social interaction may in turn increase children’s motivation with computer learning activities. This paper studied the potential of emoticons in e-learning environments. Future studies may further explore the impact of various cues and investigate other possibilities in creating sociable interfaces by identifying the features of interpersonal communication that can be applied to make a more sociable computer technology.