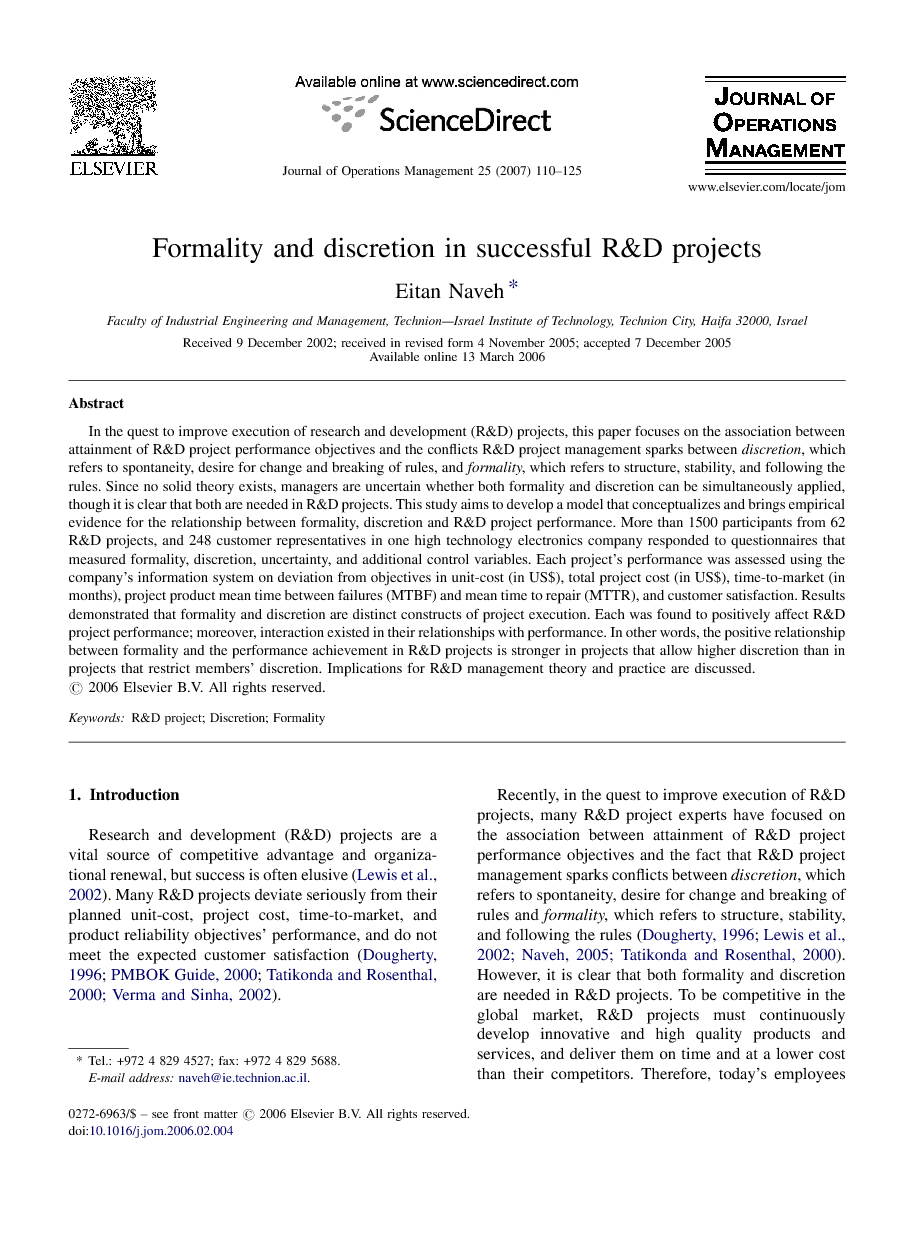 In the quest to improve execution of research and development (R&D) projects, this paper focuses on the association between attainment of R&D project performance objectives and the conflicts R&D project management sparks between discretion, which refers to spontaneity, desire for change and breaking of rules, and formality, which refers to structure, stability, and following the rules. Since no solid theory exists, managers are uncertain whether both formality and discretion can be simultaneously applied, though it is clear that both are needed in R&D projects. This study aims to develop a model that conceptualizes and brings empirical evidence for the relationship between formality, discretion and R&D project performance. More than 1500 participants from 62 R&D projects, and 248 customer representatives in one high technology electronics company responded to questionnaires that measured formality, discretion, uncertainty, and additional control variables. Each project's performance was assessed using the company's information system on deviation from objectives in unit-cost (in US$), total project cost (in US$), time-to-market (in months), project product mean time between failures (MTBF) and mean time to repair (MTTR), and customer satisfaction. Results demonstrated that formality and discretion are distinct constructs of project execution. Each was found to positively affect R&D project performance; moreover, interaction existed in their relationships with performance. In other words, the positive relationship between formality and the performance achievement in R&D projects is stronger in projects that allow higher discretion than in projects that restrict members’ discretion. Implications for R&D management theory and practice are discussed.

Research and development (R&D) projects are a vital source of competitive advantage and organizational renewal, but success is often elusive (Lewis et al., 2002). Many R&D projects deviate seriously from their planned unit-cost, project cost, time-to-market, and product reliability objectives’ performance, and do not meet the expected customer satisfaction (Dougherty, 1996; PMBOK Guide, 2000; Tatikonda and Rosenthal, 2000 and Verma and Sinha, 2002). Recently, in the quest to improve execution of R&D projects, many R&D project experts have focused on the association between attainment of R&D project performance objectives and the fact that R&D project management sparks conflicts between discretion, which refers to spontaneity, desire for change and breaking of rules and formality, which refers to structure, stability, and following the rules ( Dougherty, 1996, Lewis et al., 2002, Naveh, 2005 and Tatikonda and Rosenthal, 2000). However, it is clear that both formality and discretion are needed in R&D projects. To be competitive in the global market, R&D projects must continuously develop innovative and high quality products and services, and deliver them on time and at a lower cost than their competitors. Therefore, today's employees are required to be creative, yet also conform to rules and standards, and work efficiently to meet time and budget constraints ( Naveh and Erez, 2004).