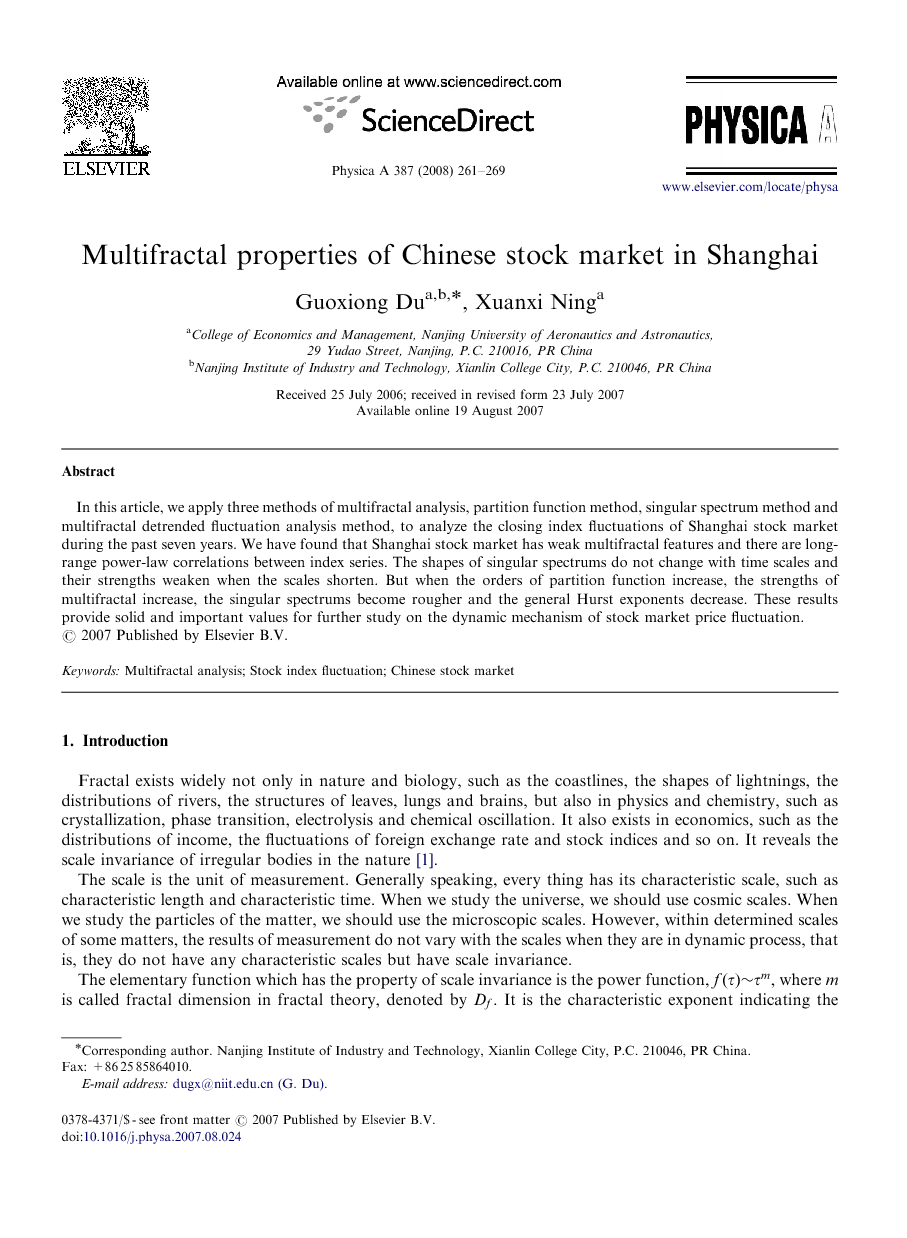 In this article, we apply three methods of multifractal analysis, partition function method, singular spectrum method and multifractal detrended fluctuation analysis method, to analyze the closing index fluctuations of Shanghai stock market during the past seven years. We have found that Shanghai stock market has weak multifractal features and there are long-range power-law correlations between index series. The shapes of singular spectrums do not change with time scales and their strengths weaken when the scales shorten. But when the orders of partition function increase, the strengths of multifractal increase, the singular spectrums become rougher and the general Hurst exponents decrease. These results provide solid and important values for further study on the dynamic mechanism of stock market price fluctuation.

Fractal exists widely not only in nature and biology, such as the coastlines, the shapes of lightnings, the distributions of rivers, the structures of leaves, lungs and brains, but also in physics and chemistry, such as crystallization, phase transition, electrolysis and chemical oscillation. It also exists in economics, such as the distributions of income, the fluctuations of foreign exchange rate and stock indices and so on. It reveals the scale invariance of irregular bodies in the nature [1]. The scale is the unit of measurement. Generally speaking, every thing has its characteristic scale, such as characteristic length and characteristic time. When we study the universe, we should use cosmic scales. When we study the particles of the matter, we should use the microscopic scales. However, within determined scales of some matters, the results of measurement do not vary with the scales when they are in dynamic process, that is, they do not have any characteristic scales but have scale invariance. The elementary function which has the property of scale invariance is the power function, f(τ)∼τmf(τ)∼τm, where m is called fractal dimension in fractal theory, denoted by DfDf. It is the characteristic exponent indicating the irregularity of data. When the scale ττ is enlarged or reduced λλ times, the new function is λmλm times the original function, f(λτ)∼λmf(τ)f(λτ)∼λmf(τ), and the shape and nature of the new function do not change. Recently, people have found that different local conditions can cause different characters and show singularities. Thus, a single characteristic exponent or fractal dimension that depends on the whole cannot describe the singularities completely. Therefore, the multifractal was put forward, which describes the different characters of different areas of the whole body, with a spectrum function or singular function. If the fractal dimension DfDf does not change with the scale ττ, it is called monofractal. The rescaled range analysis (R/S) [2] and [3] and the detrended fluctuation analysis (DFA) [4] are the methods for monofractal. If DfDf is changed with ττ, it is called the multifractal, which is one of the important analysis methods for a non-linear complex system. So far, many researches have revealed that the price or return fluctuations of different stock markets have multifractal properties [5], [6], [7], [8], [9] and [10], not only the developed markets [5] and [6] but also the newly established markets [8] and [9]; not only the short-scale indices series, such as a minute or a day [6], [10] and [15], but also long-scale indices series, such as a year [5], [8] and [9]. The multifractal properties of the fluctuations of price or return in stock markets are very important for the risk management and risk forecast. In this paper, we deeply study the multifractal properties of Shanghai stock market in China according to the closing index series over the past seven years with different scales.

In this paper, we have applied three methods of multifractal to analyze the multifractal properties of Chinese stock market in Shanghai and have obtained the identical results. The fluctuations of closing index series in the past seven years have multifractal properties and their scale invariance spans six orders of magnitude. This can originate from the existence of the long-range correlations in the index increments, as well as in the price increments. Scale invariance is closely related to the long-range correlations of the data. We should use fractal and multifractal theory, rather than the efficient market theory, to study the price or return fluctuations of stock markets. When we undertake the diversity analysis, we find that the shapes of multifractal do not change with time scales, but their strengths weaken when the scale shortens. For different scales, the general Hurst exponents are not only decreasing functions of partition orders, but also decrease faster when the scale shortens. Furthermore, they also vary with the detrending orders and obtain maximum values at m=2m=2. During the stability analysis process, we find the multifractal weakens when the time span shortens. Moreover, we also find that the singular spectrums are discontinuous functions of partition orders. It is similar to the order parameters in statistical physics when they change at critical points. This result provides important information for further study on dynamic mechanism of price or return fluctuations.