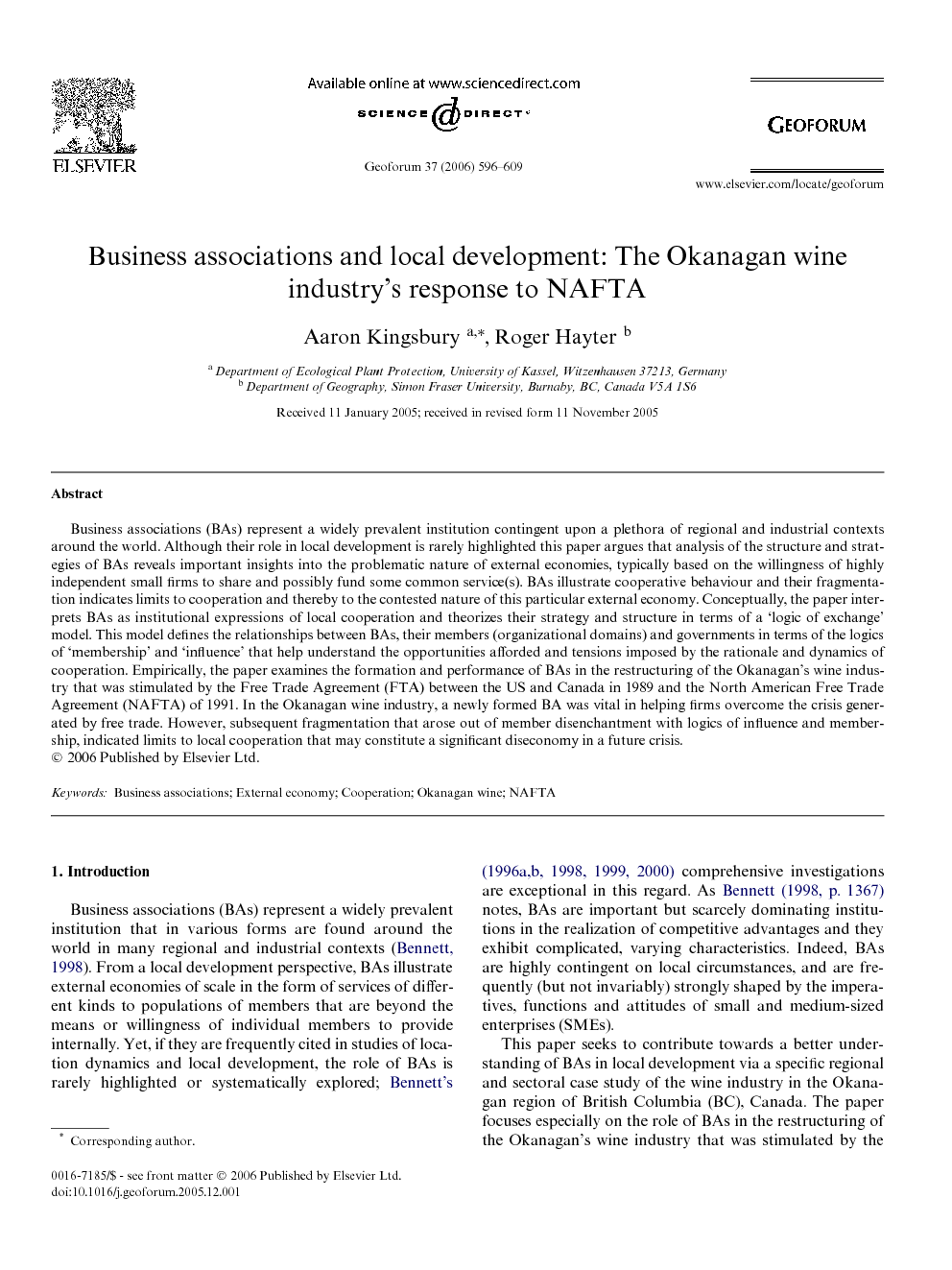 Business associations (BAs) represent a widely prevalent institution contingent upon a plethora of regional and industrial contexts around the world. Although their role in local development is rarely highlighted this paper argues that analysis of the structure and strategies of BAs reveals important insights into the problematic nature of external economies, typically based on the willingness of highly independent small firms to share and possibly fund some common service(s). BAs illustrate cooperative behaviour and their fragmentation indicates limits to cooperation and thereby to the contested nature of this particular external economy. Conceptually, the paper interprets BAs as institutional expressions of local cooperation and theorizes their strategy and structure in terms of a ‘logic of exchange’ model. This model defines the relationships between BAs, their members (organizational domains) and governments in terms of the logics of ‘membership’ and ‘influence’ that help understand the opportunities afforded and tensions imposed by the rationale and dynamics of cooperation. Empirically, the paper examines the formation and performance of BAs in the restructuring of the Okanagan’s wine industry that was stimulated by the Free Trade Agreement (FTA) between the US and Canada in 1989 and the North American Free Trade Agreement (NAFTA) of 1991. In the Okanagan wine industry, a newly formed BA was vital in helping firms overcome the crisis generated by free trade. However, subsequent fragmentation that arose out of member disenchantment with logics of influence and membership, indicated limits to local cooperation that may constitute a significant diseconomy in a future crisis.

Business associations (BAs) represent a widely prevalent institution that in various forms are found around the world in many regional and industrial contexts (Bennett, 1998). From a local development perspective, BAs illustrate external economies of scale in the form of services of different kinds to populations of members that are beyond the means or willingness of individual members to provide internally. Yet, if they are frequently cited in studies of location dynamics and local development, the role of BAs is rarely highlighted or systematically explored; Bennett, 1996a, Bennett, 1996b, Bennett, 1998, Bennett, 1999 and Bennett, 2000 comprehensive investigations are exceptional in this regard. As Bennett (1998, p. 1367) notes, BAs are important but scarcely dominating institutions in the realization of competitive advantages and they exhibit complicated, varying characteristics. Indeed, BAs are highly contingent on local circumstances, and are frequently (but not invariably) strongly shaped by the imperatives, functions and attitudes of small and medium-sized enterprises (SMEs). This paper seeks to contribute towards a better understanding of BAs in local development via a specific regional and sectoral case study of the wine industry in the Okanagan region of British Columbia (BC), Canada. The paper focuses especially on the role of BAs in the restructuring of the Okanagan’s wine industry that was stimulated by the Free Trade Agreement (FTA) between the US and Canada in 1989 and the North American Free Trade Agreement (NAFTA) of 1991. The FTA and NAFTA fundamentally changed the competitive environment of the Okanagan wine industry. Hitherto, the industry had developed around a few locally based firms that supplied cheap wine to local markets that were protected from foreign competition. The trade agreements, however, signaled the removal of this protection and threatened the import of large volumes of US-based wines that served all market segments. Both the industry and the BCs provincial government anticipated competitive salvation by an up-market shift to better quality wines produced by an increasing number of small and medium-scale producers. In practice, a cornerstone initiative of the provincial government was the creation of the British Columbia Wine Institute (BCWI) under the British Columbia Wine Act (Bill 58-1990) in 1990. The BCWI is a BA that provides various services, most notably related to marketing, and in 1990 all wine producers in BC were required to become members, 99% of which were located in the Okanagan Valley. This analysis focuses on the structure and performance of the BCWI from its inception to 2003 in stimulating the Okanagan wine industry’s shift to higher value production. The creation and behaviour of specific BAs reveal how an important form of external economy, that is normally strongly localized, is formally instituted and evolves. An important theme in recent regional development literature has emphasized the role of cooperation among firms, especially in relation to SMEs, in the realization of local competitive advantage (Patchell, 1996, Storper, 1997 and Cooke and Morgan, 1998). BAs are a formal expression of such cooperation. Yet, the oft-noted ‘independence’ of SMEs raises questions about the commitment to cooperate, as does the tendency of BAs to fragment, that is for members to quit. Bennett, 1996a, Bennett, 1996b, Bennett, 1998 and Bennett, 2000 studies of the population characteristics of BAs in the UK have impressively revealed variations in their structure, performance and motivation, why members join and leave, and the implications for government policy. As a compliment to his macroanalyses, this study focuses on one main case study in a specific regional-sectoral setting. If less amenable to formal hypothesis testing, the contributions of our approach lies in what might be termed ‘the value of concreteness’, that is the revelation and understanding of actual and dynamic behaviour, shaped by specific events and local circumstances. Moreover, our approach explicitly links BAs to local development issues, especially by connecting to literatures on agglomeration economies (and clustering and networking). Conceptually, this paper interprets BAs as problematic institutional expressions of local cooperation, collaboration or networking. From a local development perspective, the paper seeks to theorize the strategy and structure of BAs by drawing particularly on the ‘logic of exchange’ model of BAs, as developed in the business organization literature (Schmitter and Streeck, 1981 and Van Waarden, 1992; see Bennett, 2000). This model interprets the relationships between BAs, their members (organizational domains) and governments in terms of the logics of ‘membership’ and ‘influence’ that help understand the opportunities afforded and tensions imposed by the rationale and dynamics of cooperation (within BAs). Empirically, the analysis draws primarily on personal interviews with 53 respondents representing wine growers, the British Columbia Wine Institute (BCWI), and other associations. These interviews explored the rationale, functions and fragmentation of the BCWI at its formation and until 2003, most especially with respect to marketing. The analysis highlights both the success and fragmentation of the BCWI in relation to tensions in the logics of membership and influence, and the extent and limits of cooperation.