عنوان انگلیسی
All time cheaters versus cheaters in distress: An examination of cheating and oil prices in OPEC
دانلود فوری مقاله + سفارش ترجمه 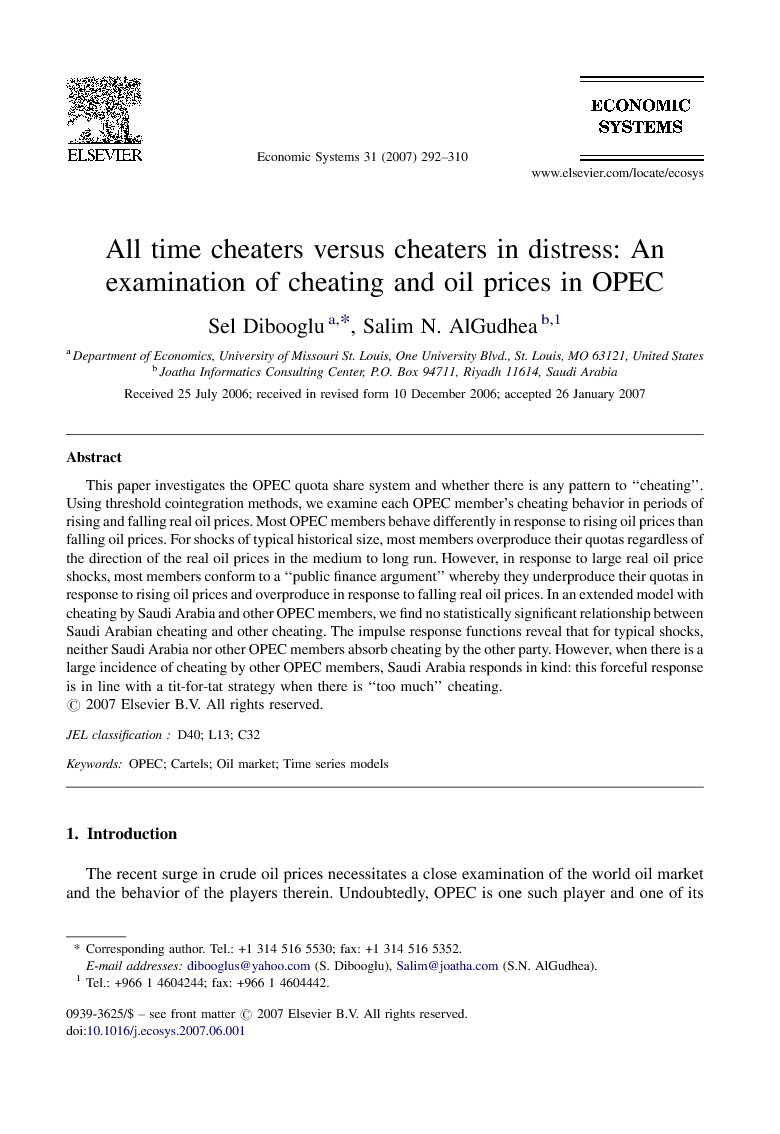 The recent surge in crude oil prices necessitates a close examination of the world oil market and the behavior of the players therein. Undoubtedly, OPEC is one such player and one of its principal strategies is the quota share system. Inaugurated in 1982, the quota share system stipulates that each member country produce a certain level of crude oil. Since it is not explicitly clear how quotas within OPEC are assigned, some papers have attempted to explain and evaluate the quota allocation process (e.g., Bakhtiari, 1992 and Gault et al., 1999). There is agreement that production capacity is a major factor in the assignment of the quotas and the quotas are adjusted from time to time to coincide with the changes in market fundamentals (Dahmani and Al-Osaimy, 2001). Although all OPEC countries agreed initially to the quota share system, they all have shown a clear tendency to deviate from their quota shares. A casual examination of quotas and actual production reveal that (i) cheating is a permanent phenomenon, (ii) some countries cheat more than others and (iii) the intensity of cheating varies over time. Even though numerous papers have examined OPEC behavior (e.g., Griffin, 1985, Jones, 1990, Dahl and Yucel, 1991, Gulen, 1996 and Kohl, 2002), limited attention has been paid to the empirical examination of the quota share system and its effectiveness within OPEC. One recent exception is Kaufmann et al. (2004) who found that OPEC capacity utilization, quotas, cheating and OECD stocks of crude oil “Granger cause” real oil prices but real oil prices do not Granger cause OECD capacity utilization, OECD production quotas, or cheating. Rotemberg and Saloner (1986) argued that growing demand is a motive for oligopoly members to behave in a competitive way. When demand is relatively high the firm that lowers its price slightly gets to capture a large market until the others are able to change their prices. Others argue that the bias in allocating the quotas is an important reason behind the cheating behavior. Griffin and Xiong (1997) argue that the allocation is biased toward small producers and emphasize discount rates as a determinant of the volume of cheating. Countries that disregard the future for present gains cheat more than other countries. According to Adelman (1986), discount rates figure prominently in oil production decisions. Lower oil prices translate into lower revenues for OPEC members, and in order to compensate for the loss of revenue, they increase production. By increasing their production, they are implicitly discounting the future more. There is a good reason to expect fluctuations in oil price to influence cheating. Since most oil exporting countries rely heavily on oil revenues for public finance, in wake of lower oil prices one would expect a country to exceed its quota to compensate for falling oil revenues. If cheating takes place to compensate for lower revenues under falling prices, one would expect cheating to decrease when prices are rising. Is the cheating behavior within OPEC different when oil price are rising than when the prices are falling? Does cheating significantly alter real oil prices? Do some members particularly, Saudi Arabia, adjust their production to “absorb” some overproduction of the quotas by others? Does Saudi Arabia enforce the rules, and if so, does the underlying behavior conform to a tit-for-tat strategy? This paper provides direct evidence on these questions and the behavior of cheating within OPEC using threshold cointegration methods with asymmetric adjustment. Specifically, we use threshold and momentum models of cointegration developed by Enders and Granger (1998) and Enders and Siklos (2001). These methods are suitable for testing whether cheating behavior within OPEC exhibits different patterns in response to rising and falling oil prices, as statistical properties of these methods are well established.2 Moreover, threshold cointegration methods allow us to discern if each OPEC member, and OPEC as a whole, respond differently to a “small oil price shock” versus a “large oil price shock”. The issue is germane since oil prices are currently at record high levels and understanding OPEC behavior is a major step towards understanding the global oil market.

This paper investigates OPEC cheating behavior and whether there is a pattern to cheating. Using threshold cointegration methods, we examine each OPEC member's cheating behavior in periods of rising and falling real oil prices. In doing so, we examine the OPEC aggregate cheating behavior, OPEC-minus-Saudi-Arabia cheating behavior, and how Saudi Arabia responds to other cheating within OPEC. In addition, we distinguish between the response of cheating to “small” and “large” real oil price shocks. Granger causality tests show that typically prices Granger cause cheating but not the other way around. The statistical tests of asymmetry based on the error correction model show that the response of cheating to the real oil price is asymmetric whereas the response of the real oil price to cheating is symmetric. Results based on the generalized impulse response functions show that there is no uniform response to rising and falling real oil prices. While most members conform to a “public finance argument” whereby they underproduce their quotas in response to rising oil prices and overproduce in response to falling real oil prices, this is true only for “unusually large” oil price shocks. For shocks of typical historical size, most members overproduce their quotas in the medium to long run. For shocks of typical size, the only OPEC members that underproduce their quotas in wake of both rising and falling real oil prices are Indonesia and Venezuela. This indicates that the typical behavior is of competitive nature and that the quota system is not very effective. This is confirmed by the response of the real oil price to a typical cheating innovation where the real oil price only rises temporarily in response to a decrease in cheating; in the long run the price declines no matter whether OPEC as whole is overproducing or underproducing the quotas. Our results also show that there is no difference between the cheating behavior of small oil producers and large oil producers. Statistically speaking, we find no significant relationship between Saudi Arabian cheating and other cheating. That is neither Saudi Arabian cheating nor other cheating within OPEC Granger causes the other. Moreover, the impulse response functions reveal that for typical shocks, neither Saudi Arabia nor other OPEC members absorb cheating by the other party. Even though for typical shocks Saudi Arabia underproduces its quota when other OPEC members do, this is only temporary. In the long run both Saudi Arabia and other OPEC members overproduce their quotas no matter what the other party is doing. However, Saudi Arabia does seem to respond to a large incidence of cheating by other OPEC members by responding in kind: this forceful response is in line with a tit-for-tat strategy when there is “too much” cheating. The foregoing analysis does not take into account how the quotas are determined. Moreover, in answering the various questions this paper relies on a simple statistical relationship between cheating and the real oil price ignoring other possibly significant variables. These are avenues for future research.