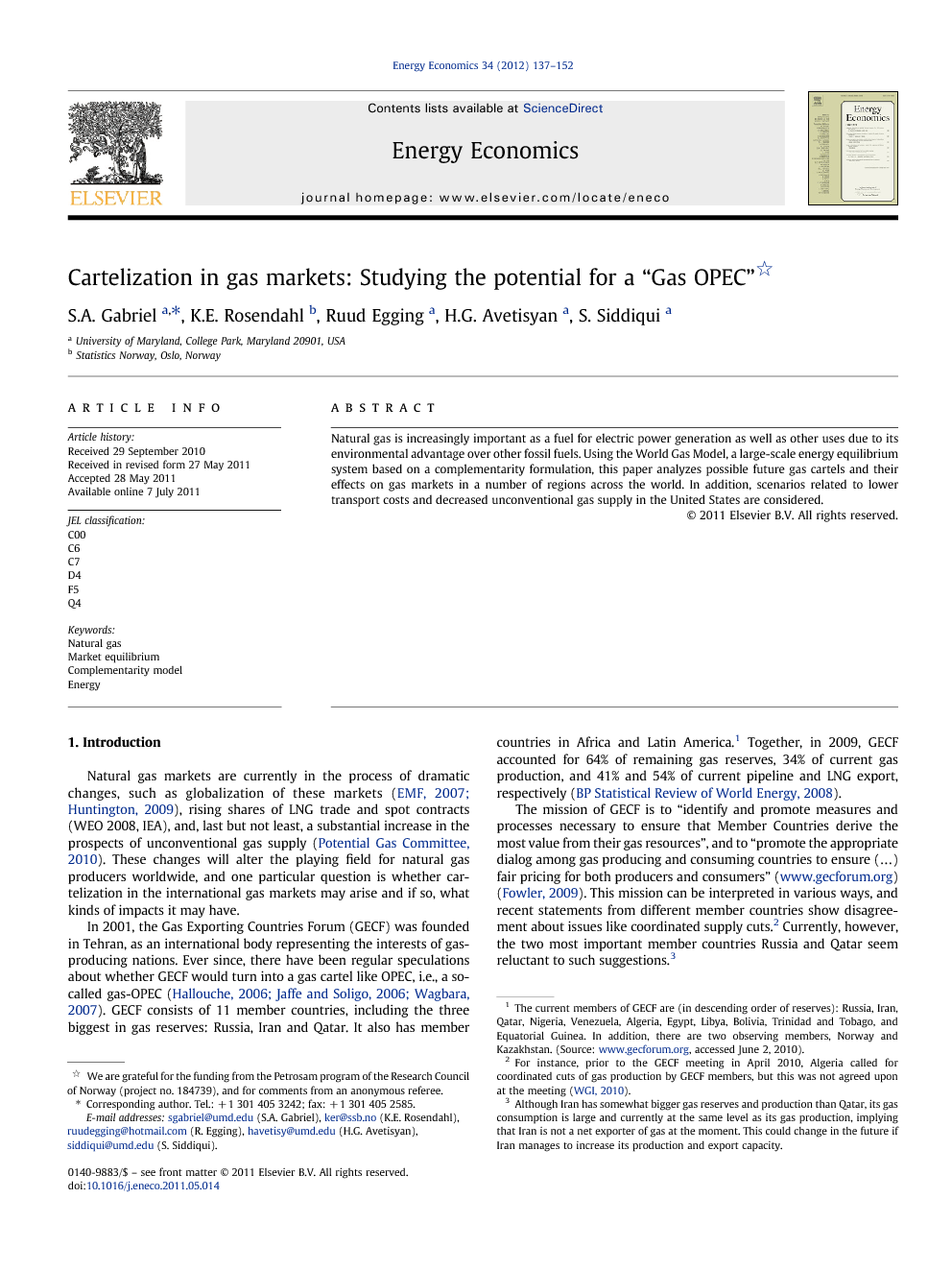 Natural gas is increasingly important as a fuel for electric power generation as well as other uses due to its environmental advantage over other fossil fuels. Using the World Gas Model, a large-scale energy equilibrium system based on a complementarity formulation, this paper analyzes possible future gas cartels and their effects on gas markets in a number of regions across the world. In addition, scenarios related to lower transport costs and decreased unconventional gas supply in the United States are considered.

Natural gas is increasingly a fuel of choice in power generation as well as other sectors and securing reliable supplies are important for many countries especially in regions rely heavily on imports e.g., Europe. In this paper, using the World Gas Model, the effects of a gas cartel along the lines of the Gas Exporting Countries Forum (GECF) have been analyzed. Besides the basic GECF member countries, additional ones have also been added to see the supplemental influence on regional prices, consumption, and production. In addition, lower transport costs and less U.S. shale gas being available were also analyzed. All the scenarios considered have strong policy implications when one takes into account supply security, environmental considerations and impact from a potential gas cartel. In the most extreme scenario where GECF, the Caspian, and the Middle Eastern countries all form a cartel, the effects are dramatic. For example, in 2030, as compared to a Base Case, Europe sees an increase of $3.69 per million BTU or $91.4 billion in lost consumer surplus due to the effects of this supra-GECF cartel. Consequently European consumption of gas drops by about 21% which would be a dramatic change. By contrast, North America sees almost no change in prices, consumption, nor production being isolated to some extent. By contrast, when the unconventional gas resource base in the United States is diminished, North America faces some changes in gas prices and consumption but the rest of the world is hardly affected. Lastly, lower transportation costs don't dramatically change prices in most regions except for Europe which sees lower values with or without the presence of the GECF cartel. Future work on gas markets could include better characterizations of the shale gas basins in the United States and elsewhere and their effects on increasing global supply and reducing prices. A natural question is whether or not the large U.S. shale gas resource if exported to other parts of the world would be enough to offset effects of a potential cartel.