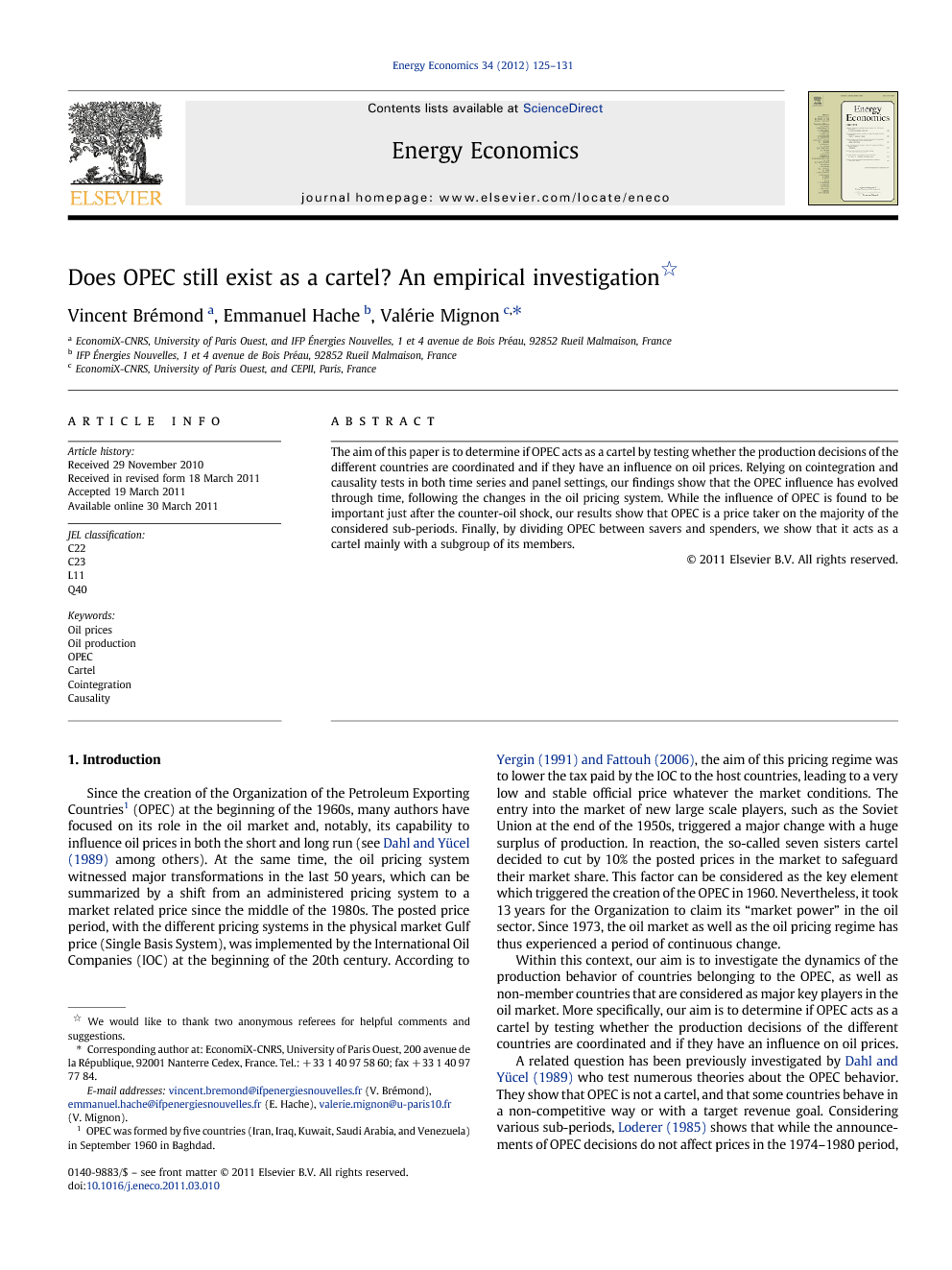 The aim of this paper is to determine if OPEC acts as a cartel by testing whether the production decisions of the different countries are coordinated and if they have an influence on oil prices. Relying on cointegration and causality tests in both time series and panel settings, our findings show that the OPEC influence has evolved through time, following the changes in the oil pricing system. While the influence of OPEC is found to be important just after the counter-oil shock, our results show that OPEC is a price taker on the majority of the considered sub-periods. Finally, by dividing OPEC between savers and spenders, we show that it acts as a cartel mainly with a subgroup of its members.

Since the creation of the Organization of the Petroleum Exporting Countries1 (OPEC) at the beginning of the 1960s, many authors have focused on its role in the oil market and, notably, its capability to influence oil prices in both the short and long run (see Dahl and Yücel (1989) among others). At the same time, the oil pricing system witnessed major transformations in the last 50 years, which can be summarized by a shift from an administered pricing system to a market related price since the middle of the 1980s. The posted price period, with the different pricing systems in the physical market Gulf price (Single Basis System), was implemented by the International Oil Companies (IOC) at the beginning of the 20th century. According to Yergin, 1991 and Fattouh, 2006, the aim of this pricing regime was to lower the tax paid by the IOC to the host countries, leading to a very low and stable official price whatever the market conditions. The entry into the market of new large scale players, such as the Soviet Union at the end of the 1950s, triggered a major change with a huge surplus of production. In reaction, the so-called seven sisters cartel decided to cut by 10% the posted prices in the market to safeguard their market share. This factor can be considered as the key element which triggered the creation of the OPEC in 1960. Nevertheless, it took 13 years for the Organization to claim its “market power” in the oil sector. Since 1973, the oil market as well as the oil pricing regime has thus experienced a period of continuous change. Within this context, our aim is to investigate the dynamics of the production behavior of countries belonging to the OPEC, as well as non-member countries that are considered as major key players in the oil market. More specifically, our aim is to determine if OPEC acts as a cartel by testing whether the production decisions of the different countries are coordinated and if they have an influence on oil prices. A related question has been previously investigated by Dahl and Yücel (1989) who test numerous theories about the OPEC behavior. They show that OPEC is not a cartel, and that some countries behave in a non-competitive way or with a target revenue goal. Considering various sub-periods, Loderer (1985) shows that while the announcements of OPEC decisions do not affect prices in the 1974–1980 period, the alternative hypothesis that OPEC could act as a cartel is not rejected during the beginning of the 1980s. Using cointegration and Granger causality tests, Gülen (1996) obtains similar findings: OPEC production Granger-causes oil prices during the 1982–1993 period, whereas none causality is found for the previous periods investigated. Testing different models (namely cartel models, competitive models, target revenue models and property rights models), Griffin (1985) puts forward that the partial market sharing is the best fitted model for the OPEC countries, while non-OPEC countries are better represented by the competitive model. Other studies consider that OPEC is a divided cartel. Hnyilicza and Pindyck (1976) split OPEC in two groups, namely “saver” and “spender” countries, the spender countries being composed of members with an immediate need for cash and rate of discount lower than the savers, and focuses on the bargaining power between these two groups. Following the same typology, Aperjis (1982) concludes that a conflict can exist between OPEC members regarding their production decisions. There also exists a set of studies concerned with target behavior models, such as Teece, 1982 and Adelman, 1982 who modeled OPEC behavior according to a target revenue model. Alhajji and Huettner (2000) conclude as well that OPEC does not act as a cartel, and that the target revenue model is not rejected for Algeria, Libya and Nigeria. Finally, one can mention the works by Johany (1980) focusing on the impact of the uncertainty about property rights, and MacAvoy (1982) showing that political events and market fundamentals (a growing demand and speculation) have played a key role in explaining the price dynamics during the 1970s, more than the OPEC behavior itself. This brief survey of the literature shows that no consensus exists regarding the OPEC production behavior. Our aim is to contribute to this literature by testing if OPEC acts as a cartel. To this end, we rely on time series and panel (i) cointegration techniques to investigate the existence of a long-term relationship between the production of each member and that of the OPEC, and (ii) Granger causality tests to apprehend the influence of OPEC production decisions on oil prices. The rest of the paper is organized as follows. In Section 2, we briefly describe the major changes observed in the oil pricing regime since the first oil shock, which also define the sub-periods of our empirical study. Section 3 describes the data, and Section 4 provides the results of cointegration and causality tests. Finally, Section 5 concludes the article.

In this paper, we analyze the evolution of the production behavior of countries belonging to the OPEC, as well as four non-member countries that are considered as key players in the oil market (Mexico, Norway, Russia, and the UK). More specifically, we aim at determining if OPEC acts as a cartel. To this end, we rely on time series and panel cointegration and causality tests to investigate whether production decisions of the different countries are coordinated and if they have an influence on oil prices. Our findings shows that the influence of OPEC has evolved through time, following the changes in the oil pricing system registered on the market. In particular, investigating the OPEC behavior on various sub-periods, we find that, while OPEC's influence was strong in the period that just follows the oil counter-shock, it acts as a price taker for the majority of the considered sub-periods since 1973. Finally, by splitting OPEC into two groups, the savers and spenders, we show that OPEC may be viewed as a divided organization in the sense that it acts as a cartel mainly with a subgroup of its members.