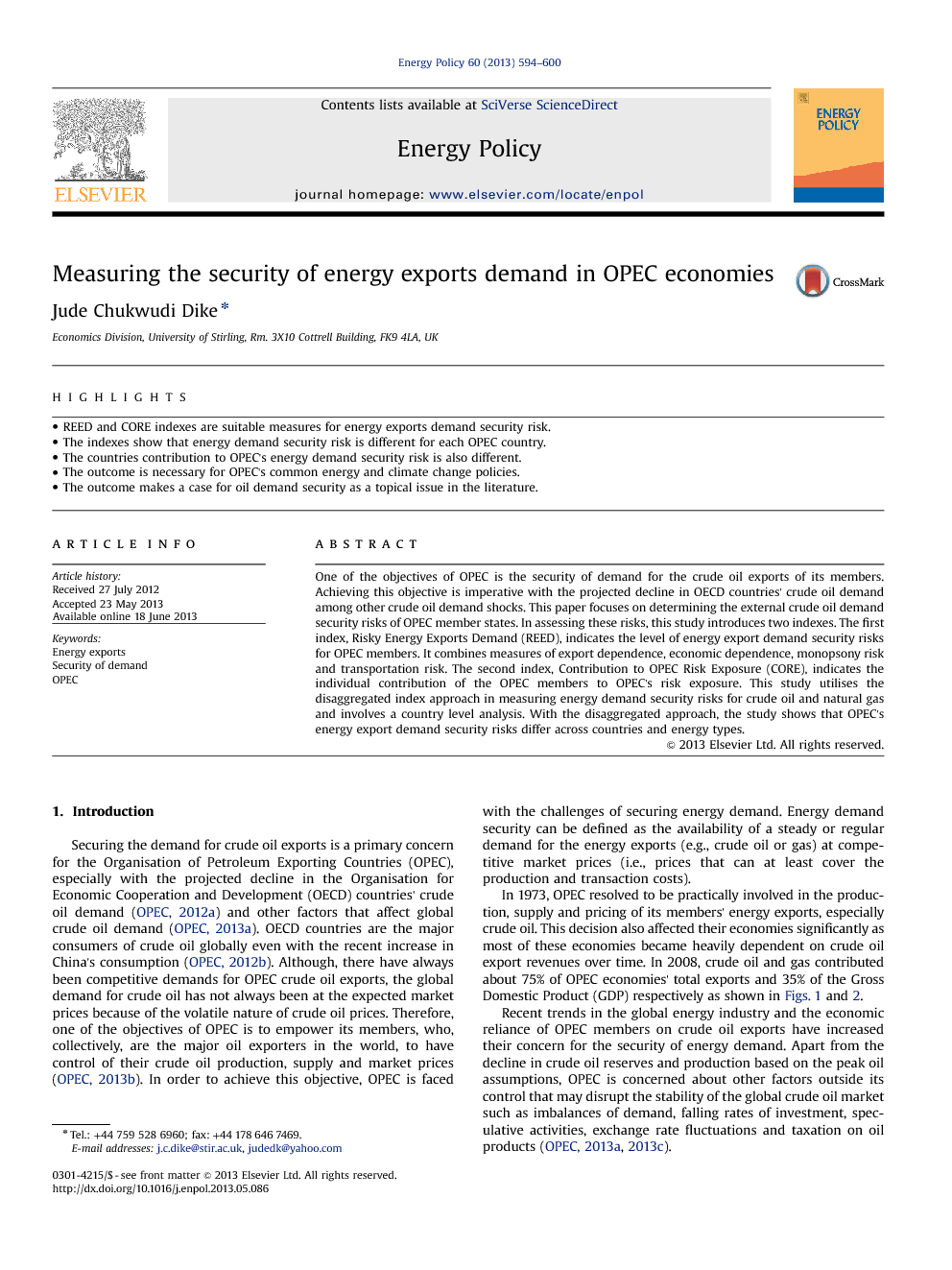 One of the objectives of OPEC is the security of demand for the crude oil exports of its members. Achieving this objective is imperative with the projected decline in OECD countries' crude oil demand among other crude oil demand shocks. This paper focuses on determining the external crude oil demand security risks of OPEC member states. In assessing these risks, this study introduces two indexes. The first index, Risky Energy Exports Demand (REED), indicates the level of energy export demand security risks for OPEC members. It combines measures of export dependence, economic dependence, monopsony risk and transportation risk. The second index, Contribution to OPEC Risk Exposure (CORE), indicates the individual contribution of the OPEC members to OPEC's risk exposure. This study utilises the disaggregated index approach in measuring energy demand security risks for crude oil and natural gas and involves a country level analysis. With the disaggregated approach, the study shows that OPEC's energy export demand security risks differ across countries and energy types.

Securing the demand for crude oil exports is a primary concern for the Organisation of Petroleum Exporting Countries (OPEC), especially with the projected decline in the Organisation for Economic Cooperation and Development (OECD) countries' crude oil demand (OPEC, 2012a) and other factors that affect global crude oil demand (OPEC, 2013a). OECD countries are the major consumers of crude oil globally even with the recent increase in China's consumption (OPEC, 2012b). Although, there have always been competitive demands for OPEC crude oil exports, the global demand for crude oil has not always been at the expected market prices because of the volatile nature of crude oil prices. Therefore, one of the objectives of OPEC is to empower its members, who, collectively, are the major oil exporters in the world, to have control of their crude oil production, supply and market prices (OPEC, 2013b). In order to achieve this objective, OPEC is faced with the challenges of securing energy demand. Energy demand security can be defined as the availability of a steady or regular demand for the energy exports (e.g., crude oil or gas) at competitive market prices (i.e., prices that can at least cover the production and transaction costs). In 1973, OPEC resolved to be practically involved in the production, supply and pricing of its members' energy exports, especially crude oil. This decision also affected their economies significantly as most of these economies became heavily dependent on crude oil export revenues over time. In 2008, crude oil and gas contributed about 75% of OPEC economies' total exports and 35% of the Gross Domestic Product (GDP) respectively as shown in Fig. 1 and Fig. 2. Full-size image (46 K) Fig. 1. OPEC member states' oil/economic dependence. (Source: OPEC, 2009) Figure options Full-size image (24 K) Fig. 2. OPEC's oil export dependence. (Source: OPEC, 2009) Figure options Recent trends in the global energy industry and the economic reliance of OPEC members on crude oil exports have increased their concern for the security of energy demand. Apart from the decline in crude oil reserves and production based on the peak oil assumptions, OPEC is concerned about other factors outside its control that may disrupt the stability of the global crude oil market such as imbalances of demand, falling rates of investment, speculative activities, exchange rate fluctuations and taxation on oil products (〈http:/www.opec.org/opec_web/static_files_project/media/downloads/publications/FAQ.pdf〉 and 〈http:/www.opec.org/opec_web/en/press_room/179.htm〉). This paper focuses on the investigation of the level of energy demand security risks for the different economies under OPEC's umbrella. The paper addresses the external energy demand security risks dwelling on the problems associated with crude oil and natural gas exports. This is because the internal crude oil and gas consumptions in most OPEC member states are subsidised which leads to net loss at competitive market conditions (Oil and Gas Journal, 2010). Just like energy supply security, energy demand security is not affected by economic rationales only but a retinue of other factors. Among these factors is the political rationale. The major crude oil and gas importing countries may act as monopsonists by determining the quantity of demand and market prices for economic and/or political reasons. When such monopsonists' interruptions occur, market prices are bound to be affected which would either reduce crude oil and gas consumptions or require OPEC to reduce output to maintain the existing price levels or incur losses. These factors and others discussed in detail later are the building blocks of the methodology used for this study. Apart from the major conventional market factors that drive the consumption of crude oil in OECD countries, another factor that may affect their crude oil consumption is their responses and policy measures to international conventions on climate change mitigation (CCM) such as the Kyoto Protocol. For instance, OECD countries make up the majority of the United Nation Framework Convention on Climate Change (UNFCCC) Annex 1 countries. They have agreed under the UNFCCC's Kyoto Protocol targets to reduce their CO2 emissions levels using CCM policies such as carbon taxes or energy efficiency strategies or the introduction of subsidies on renewable energy sources, thereby, reducing fossil energy consumptions which may reduce imports as well (Barnett et al., 2004). OPEC (2012a) projects reduction in crude oil demand in OECD countries by 5.7 mb/day from 2016 to 2035 in its 2012 World Oil Outlook. According to Ghanem et al. (1999) the imposition of a carbon tax in the OECD regions or Annex 1 countries that is sufficient to meet the country-level Kyoto and post-Kyoto CO2 emissions targets, would result in a fall in OECD oil demand by 6.5 million barrels of crude oil per day, and this translates to a loss in annual OPEC oil export revenue by US$23 billion. In order to develop policies to address the expected impacts of these external demand shocks on OPEC economies, there is need to understand the crude oil exports demand security risks facing OPEC member states respectively. While the crude oil index is the subject of interest, the gas index is introduced to show that energy exports demand security risks differ under different energy types. Furthermore, the indexes designed in this study do not show the actual impact of energy exports demand shocks on OPEC economies as they are specifically developed to show comparison between OPEC member states energy export demand security risks. The structure of the paper is as follows. After this section is the literature review in Section 2 while the methodology comes up in Section 3. The data are discussed briefly in Section 4 while the results are presented in Section 5. The conclusion and policy implications come up in Section 6.