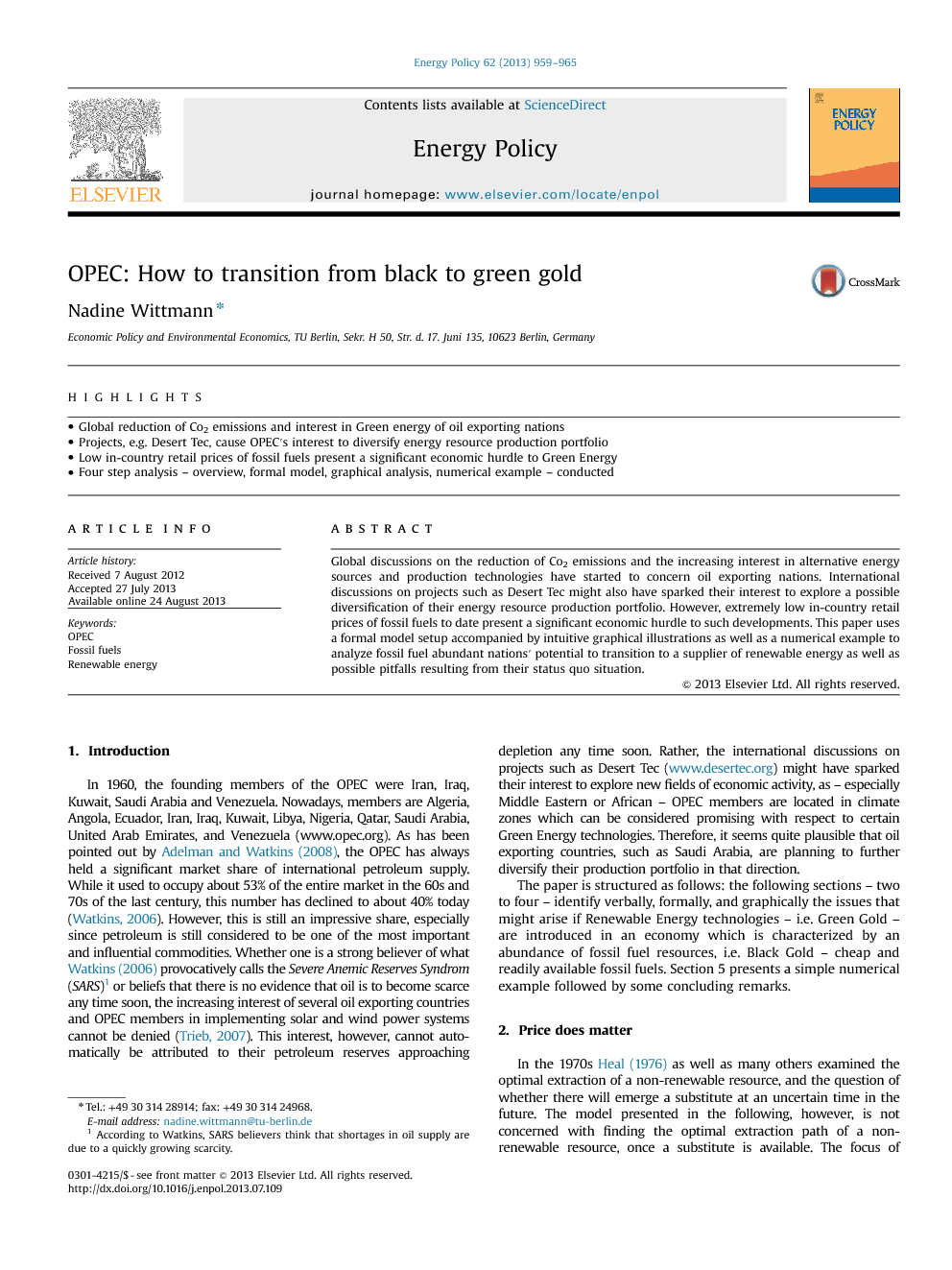 Global discussions on the reduction of Co2 emissions and the increasing interest in alternative energy sources and production technologies have started to concern oil exporting nations. International discussions on projects such as Desert Tec might also have sparked their interest to explore a possible diversification of their energy resource production portfolio. However, extremely low in-country retail prices of fossil fuels to date present a significant economic hurdle to such developments. This paper uses a formal model setup accompanied by intuitive graphical illustrations as well as a numerical example to analyze fossil fuel abundant nations′ potential to transition to a supplier of renewable energy as well as possible pitfalls resulting from their status quo situation.

In 1960, the founding members of the OPEC were Iran, Iraq, Kuwait, Saudi Arabia and Venezuela. Nowadays, members are Algeria, Angola, Ecuador, Iran, Iraq, Kuwait, Libya, Nigeria, Qatar, Saudi Arabia, United Arab Emirates, and Venezuela (www.opec.org). As has been pointed out by Adelman and Watkins (2008), the OPEC has always held a significant market share of international petroleum supply. While it used to occupy about 53% of the entire market in the 60s and 70s of the last century, this number has declined to about 40% today (Watkins, 2006). However, this is still an impressive share, especially since petroleum is still considered to be one of the most important and influential commodities. Whether one is a strong believer of what Watkins (2006) provocatively calls the Severe Anemic Reserves Syndrom (SARS) 1 or beliefs that there is no evidence that oil is to become scarce any time soon, the increasing interest of several oil exporting countries and OPEC members in implementing solar and wind power systems cannot be denied ( Trieb, 2007). This interest, however, cannot automatically be attributed to their petroleum reserves approaching depletion any time soon. Rather, the international discussions on projects such as Desert Tec (www.desertec.org) might have sparked their interest to explore new fields of economic activity, as – especially Middle Eastern or African – OPEC members are located in climate zones which can be considered promising with respect to certain Green Energy technologies. Therefore, it seems quite plausible that oil exporting countries, such as Saudi Arabia, are planning to further diversify their production portfolio in that direction. The paper is structured as follows: the following sections – two to four – identify verbally, formally, and graphically the issues that might arise if Renewable Energy technologies – i.e. Green Gold – are introduced in an economy which is characterized by an abundance of fossil fuel resources, i.e. Black Gold – cheap and readily available fossil fuels. Section 5 presents a simple numerical example followed by some concluding remarks.

Overall, there seems to exist a substantial potential for some OPEC nations to engage successfully in the production of solar or wind energy (Rehman, 2005 and Trieb, 2007). Depending on the countries′ respective climate zone, geographical characteristics and technological progress, this could either be done satisfying in-country energy demand only or even holding the prospect of becoming an exporter of Renewable Energy, i.e. Green Gold. However, given the present pricing policy and seemingly light-minded attitude towards the ready availability and usage of fossil fuels within various nations (Cheon et al., 2009 and Diesendorf and Riedy, 2003), these circumstances are likely to present a significant economic hurdle to a successful market entry of renewable energy into many nations′ energy resource production markets. Moreover, these findings are neither confined to this theoretical model setup nor are they only prevalent in OPEC member states. E.g. the recently published paper by Cheon et al. (2009) also found that a multitude of nations still spend tremendous amounts of money on subsidizing the consumption of fossil fuels which amounted to a total of 400 billion $US in 2010. According to topical research (Cheon et al., 2009, Lind and Granqvist, 2010 and Diesendorf and Riedy, 2003) this common practice leads to significant economic inefficiencies and hinders efforts regarding Co2 emission reductions which underpins the conclusions brought about by the analysis presented above. Thereby, the underlying microeconomic approach and subsequent results can be perceived as a valid theoretical foundation for economic and political decision making. Its findings portend that only an adjustment of in-country fossil fuel pricing policy, possibly combined with an alternative way of government market intervention as well as a shift in the general attitude towards the way energy resources are consumed and valued, might bring about the necessary changes to give nations rich in fossil fuel resources a chance and an incentive to transition from Black to Green Gold production in the near future. And it actually appears as though steps are being taken in the respective direction as, just of now,15 Saudi Arabia has announced to intensify efforts towards a more sustainable energy generation. By 2032, about 30% of its total energy demanded, i.e. around 54 GWh, are to be generated by renewable resources, according to official sources.16 Although this is certainly only one piece of the puzzle, it seems as though the tides are turning in an adequate direction.