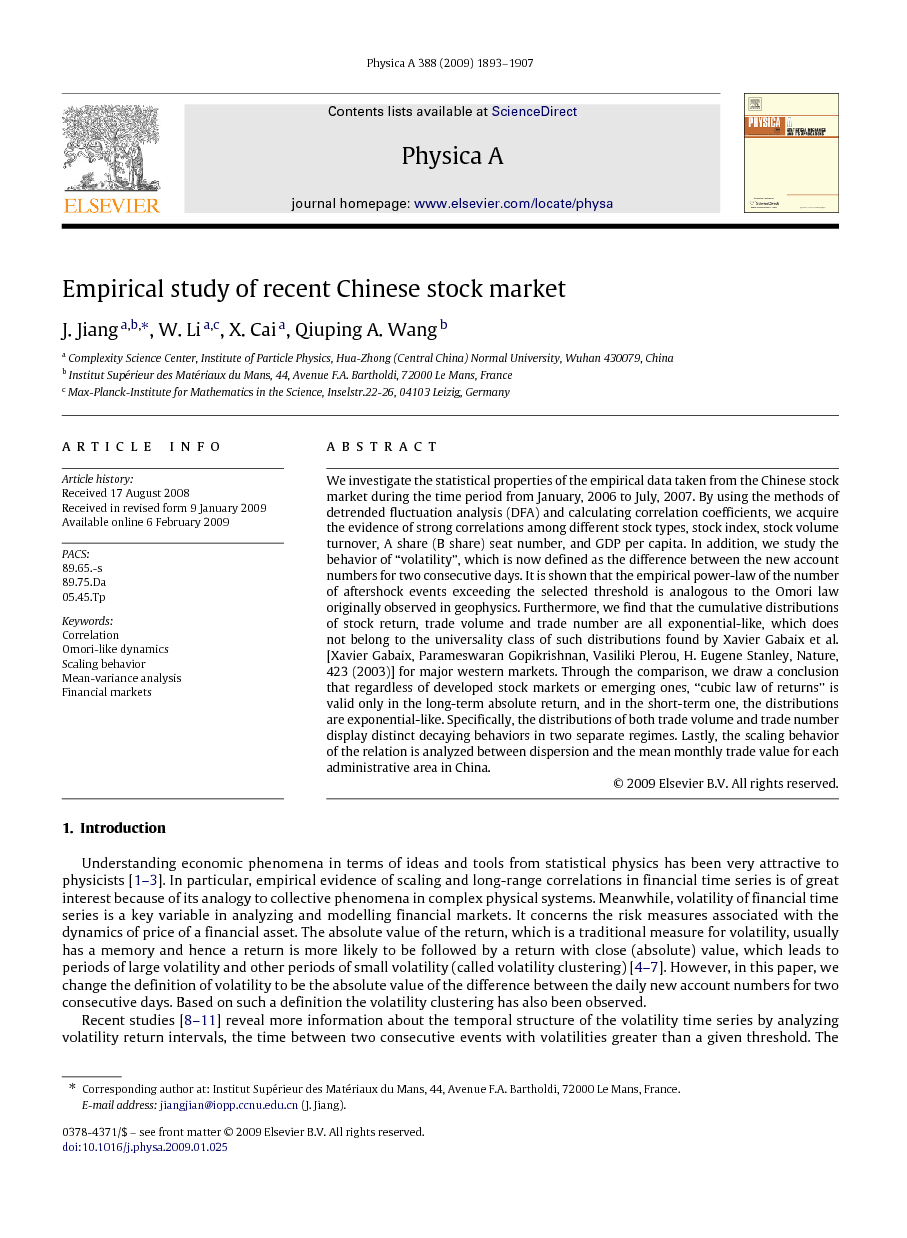 We investigate the statistical properties of the empirical data taken from the Chinese stock market during the time period from January, 2006 to July, 2007. By using the methods of detrended fluctuation analysis (DFA) and calculating correlation coefficients, we acquire the evidence of strong correlations among different stock types, stock index, stock volume turnover, A share (B share) seat number, and GDP per capita. In addition, we study the behavior of “volatility”, which is now defined as the difference between the new account numbers for two consecutive days. It is shown that the empirical power-law of the number of aftershock events exceeding the selected threshold is analogous to the Omori law originally observed in geophysics. Furthermore, we find that the cumulative distributions of stock return, trade volume and trade number are all exponential-like, which does not belong to the universality class of such distributions found by Xavier Gabaix et al. [Xavier Gabaix, Parameswaran Gopikrishnan, Vasiliki Plerou, H. Eugene Stanley, Nature, 423 (2003)] for major western markets. Through the comparison, we draw a conclusion that regardless of developed stock markets or emerging ones, “cubic law of returns” is valid only in the long-term absolute return, and in the short-term one, the distributions are exponential-like. Specifically, the distributions of both trade volume and trade number display distinct decaying behaviors in two separate regimes. Lastly, the scaling behavior of the relation is analyzed between dispersion and the mean monthly trade value for each administrative area in China.

Understanding economic phenomena in terms of ideas and tools from statistical physics has been very attractive to physicists [1], [2] and [3]. In particular, empirical evidence of scaling and long-range correlations in financial time series is of great interest because of its analogy to collective phenomena in complex physical systems. Meanwhile, volatility of financial time series is a key variable in analyzing and modelling financial markets. It concerns the risk measures associated with the dynamics of price of a financial asset. The absolute value of the return, which is a traditional measure for volatility, usually has a memory and hence a return is more likely to be followed by a return with close (absolute) value, which leads to periods of large volatility and other periods of small volatility (called volatility clustering) [4], [5], [6] and [7]. However, in this paper, we change the definition of volatility to be the absolute value of the difference between the daily new account numbers for two consecutive days. Based on such a definition the volatility clustering has also been observed. Recent studies [8], [9], [10] and [11] reveal more information about the temporal structure of the volatility time series by analyzing volatility return intervals, the time between two consecutive events with volatilities greater than a given threshold. The regularity discovered is analogous to a statistical law discovered in geophysics more than a century ago and known today as the Omori law [12] describing the aftershock following a large earthquake. Here, we show the relaxation dynamics of the new volatility characterized by the Omori law, which holds not only after significant volatilities, but also after “intermediate-shocks”. The statistical properties of financial time series exhibit several universalities verified by many diverse financial markets, which are called stylized facts [13], [14] and [15]. Here, we particularly pay attention to the following ones. For example, the power-law distribution of stock return and the number of trade, with exponent ζr=ζN≃3ζr=ζN≃3; the power-law distribution of trading volume, with exponent ζq≃1.5ζq≃1.5. All previous studies [16], [17], [18] and [19] were based on the financial data from mature financial markets in developed countries. Here, in this paper, on the base of empirical analysis and theoretical reasoning, we present dramatically different results by checking the data generated by the recent Chinese stock market. It is found that the robustness of the “cubic law of returns” and “half-cubic law of trading volume” has been broken. We draw a more specific and accurate conclusion. In addition, we perform the scaling analysis of the fluctuations of trade activities that are occurred in the recent Chinese stock market through the method of mean-variance analysis introduced by Menezes and Barabasi [20], [21] and [22]. Furthermore, we explore the correlations among several fundamentally quantities such as different stock types, stock index, volume turnover, A share (B share) seat number, and GDP per capita with the tools of detrended fluctuation analysis (DFA) [23], [24], [25] and [26] and correlation coefficient, which is helpful for understanding the fluctuation behavior in Chinese stock market. This paper is organized as follows. Section 2 presents information about the data set. In Section 3, we present the correlations between those quantities mentioned in the paragraph right above and show the evidence of abnormality of Chinese stock market in the period considered. In Section 4, we study the relaxation dynamics of aftershocks after large volatility. In Section 5, we check the statistical behavior of stock return, trade volume and the number of trade and propose a theoretical proof, based on a plausible assumption, which provides an explanation for some empirical findings. Besides, we analyze the scaling behavior of the fluctuations of trade activities. Section 6 presents a brief discussion and the main conclusion.

We have investigated the statistical behavior of Chinese stock market from January, 2006 to July, 2007 when the market behaves dramatically different from other major stock markets. We explore several new data sets which have not yet been studied so far (to best of our knowledge), such as the new account number, business outlet number, and A share (B share) seat number. Then we analyze the correlations among different stock types, stock index, volume turnover, A share (B share) seat number, and GDP per capita. By using the method of DFA, we find that weak long-range correlations exist in time series of seven different stock types. By calculating the correlation coefficients, we find that strong correlation exists between GDP per capita and volume turnover. The same behavior is found between business outlet number and GDP per capita, as well as between A share (B share) seat number and GDP per capita. We also show the percentage of total number of A share accounts distributed in different areas by histogram, which indicates the situation of sharply imbalanced economy development in China. Furthermore, we make a comparison of the index close price evolution between SSE Composite (Shanghai) and SP500 (New York), CAC40 (Paris), FTSE 100 Index (London) and calculate the correlation coefficients among these stock indexes. It provides partial evidence for the abnormality in the current Chinese stock market. Next we investigate the dynamical behavior of the volatility of daily new account number after large volatility shocks in Chinese stock market. These large volatility shocks are selected objectively, as well as the durations of shock impact. We find that large shocks are followed by large aftershocks, which yields an Omori-like power-law. The value of power-law exponent ϕϕ is increasing with the volatility threshold qq, which implies that large aftershocks decay faster. This law is analogous to the one found for the SP500 index. Specifically, in this paper, we find self-similar features in the volatility within the less significant volatility period. There are smaller shocks that themselves behave similar to the Omori-like power-law on smaller scales. Finally, we find that the cumulative distribution of stock returns is exponential in the short-term period, which does not agree with the universality of “the cubic law of returns”. The longer-term behavior of the distribution, no matter in developed or emerging markets, obeys the power-law. We also analyze the distributions of trade volume and trade number and find that they both show the exponential behaviors P{v>x}∼exp(x/αv)P{v>x}∼exp(x/αv) and P{n>x}∼exp(x/αn)P{n>x}∼exp(x/αn) with different exponent values αvαv and αnαn in two regions. When v>v∗v>v∗, View the MathML sourceαv=35αn; when v≤v∗v≤v∗, View the MathML sourceαv=53αn. Besides, our simple reasoning explains the empirical results based on a set of assumptions. These results are not consistent with universality found by Ref. [39] and the irregular behavior of exponential distribution is suggestive of the difference in market mechanism between the immature markets and the developed ones. Specially, external influence might take a partial role in it. Furthermore, we perform the analysis of scaling behavior of dispersion and the mean monthly trade value of each administrative area. According to our observations, exogenous driving forces take more advantages in the current Chinese stock market, which is consistent with above comments.