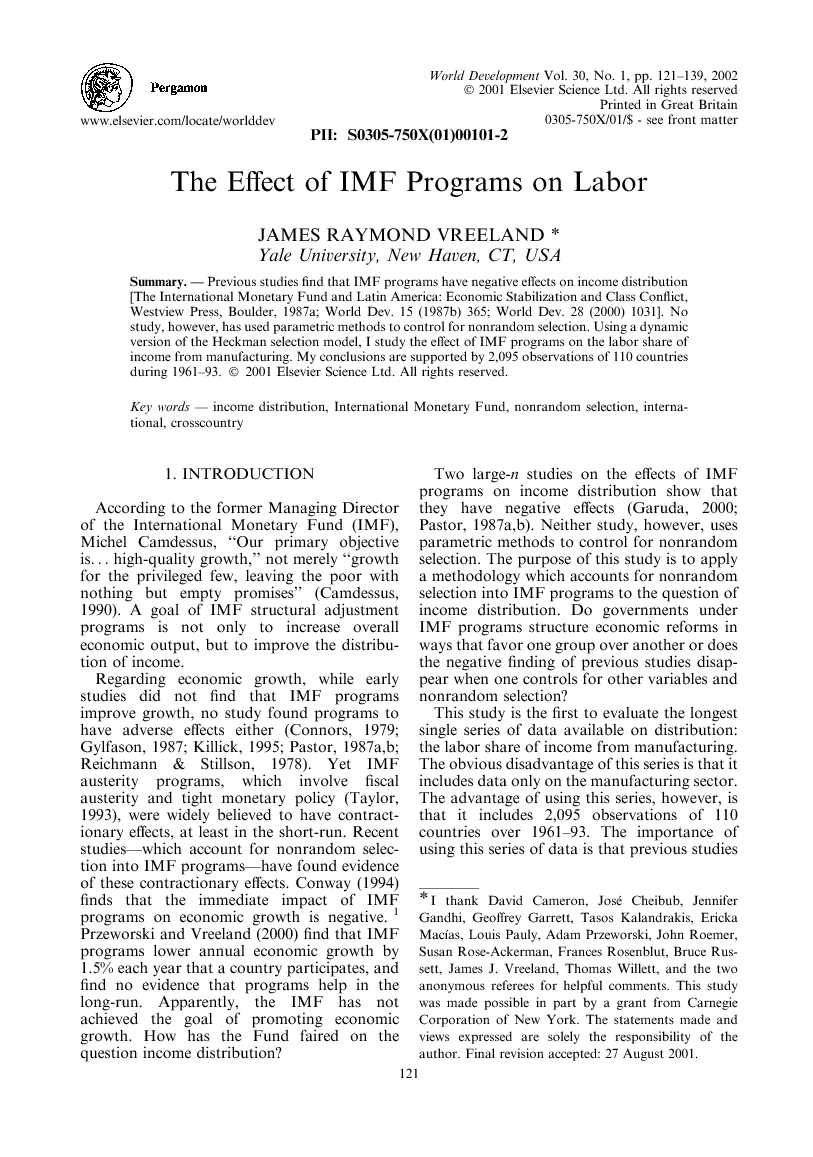 Previous studies find that IMF programs have negative effects on income distribution [The International Monetary Fund and Latin America: Economic Stabilization and Class Conflict, Westview Press, Boulder, 1987a; World Dev. 15 (1987b) 365; World Dev. 28 (2000) 1031]. No study, however, has used parametric methods to control for nonrandom selection. Using a dynamic version of the Heckman selection model, I study the effect of IMF programs on the labor share of income from manufacturing. My conclusions are supported by 2,095 observations of 110 countries during 1961–93.

According to the former Managing Director of the International Monetary Fund (IMF), Michel Camdessus, “Our primary objective is… high-quality growth,” not merely “growth for the privileged few, leaving the poor with nothing but empty promises” (Camdessus, 1990). A goal of IMF structural adjustment programs is not only to increase overall economic output, but to improve the distribution of income. Regarding economic growth, while early studies did not find that IMF programs improve growth, no study found programs to have adverse effects either (Connors, 1979, Gylfason, 1987, Killick, 1995, Pastor, 1987a, Pastor, 1987b and Reichmann and Stillson, 1978). Yet IMF austerity programs, which involve fiscal austerity and tight monetary policy (Taylor, 1993), were widely believed to have contractionary effects, at least in the short-run. Recent studies—which account for nonrandom selection into IMF programs—have found evidence of these contractionary effects. Conway (1994) finds that the immediate impact of IMF programs on economic growth is negative.1Przeworski and Vreeland (2000) find that IMF programs lower annual economic growth by 1.5% each year that a country participates, and find no evidence that programs help in the long-run. Apparently, the IMF has not achieved the goal of promoting economic growth. How has the Fund faired on the question income distribution? Two large-n studies on the effects of IMF programs on income distribution show that they have negative effects ( Garuda, 2000, Pastor, 1987a and Pastor, 1987b). Neither study, however, uses parametric methods to control for nonrandom selection. The purpose of this study is to apply a methodology which accounts for nonrandom selection into IMF programs to the question of income distribution. Do governments under IMF programs structure economic reforms in ways that favor one group over another or does the negative finding of previous studies disappear when one controls for other variables and nonrandom selection? This study is the first to evaluate the longest single series of data available on distribution: the labor share of income from manufacturing. The obvious disadvantage of this series is that it includes data only on the manufacturing sector. The advantage of using this series, however, is that it includes 2,095 observations of 110 countries over 1961–93. The importance of using this series of data is that previous studies using data with fewer observations were unable to use parametric methods to control for other factors that may influence both IMF participation and income distribution (Garuda, 2000). If my results are consistent with the findings of Pastor, 1987a and Pastor, 1987b and Garuda (2000), we will have confidence that even controlling for the fact that countries participate in IMF programs under bad economic conditions, the inherent effects of programs are negative on income distribution. If my findings are not consistent, then we must question whether the previous findings are simply driven by nonrandom selection.

As the first study to use regression analysis that controls for the effects of nonrandom selection on the largest set of data on distribution yet considered, this study confirms the main findings of Pastor, 1987a and Pastor, 1987b and Garuda (2000). IMF programs have negative distributional consequences. Thus, this finding holds across data sets and methodologies. If IMF programs hurt economic growth and redistribute income away from labor, labor is worse off—in terms of income—when countries participate in IMF programs. For capital, however, there is a tradeoff: growth decreases but share of income increases. Shifts in distribution toward capital mitigate the negative effects on economic growth for this group. This study shows that the change in capital share of income from manufacturing is large enough to increase the income of capital, despite lower growth rates. Balance-of-payments crises and exchange instability are facts of life, so the IMF has an important role to play as a lender of last resort. The question is whether coping with these crises must necessarily reduce labor share. Note that reducing the income of labor may be by design. After all, the IMF presumes that balance-of-payments crises are due to excess demand. Recall from the introduction, however, that a “primary objective” of Fund programs is “high-quality growth.” Following the definition of former IMF Managing Director Michel Camdessus, high quality growth occurs when the benefits of positive economic growth are distributed across all income groups. Previous research shows that IMF programs lower economic growth, and this study demonstrates that the adverse effects are concentrated on labor. Indeed, despite negative economic growth, the income of “the privileged few” increases. Thus, according to the characterization of Camdessus, the form of growth promoted by the IMF must be considered of the “lowest quality.”