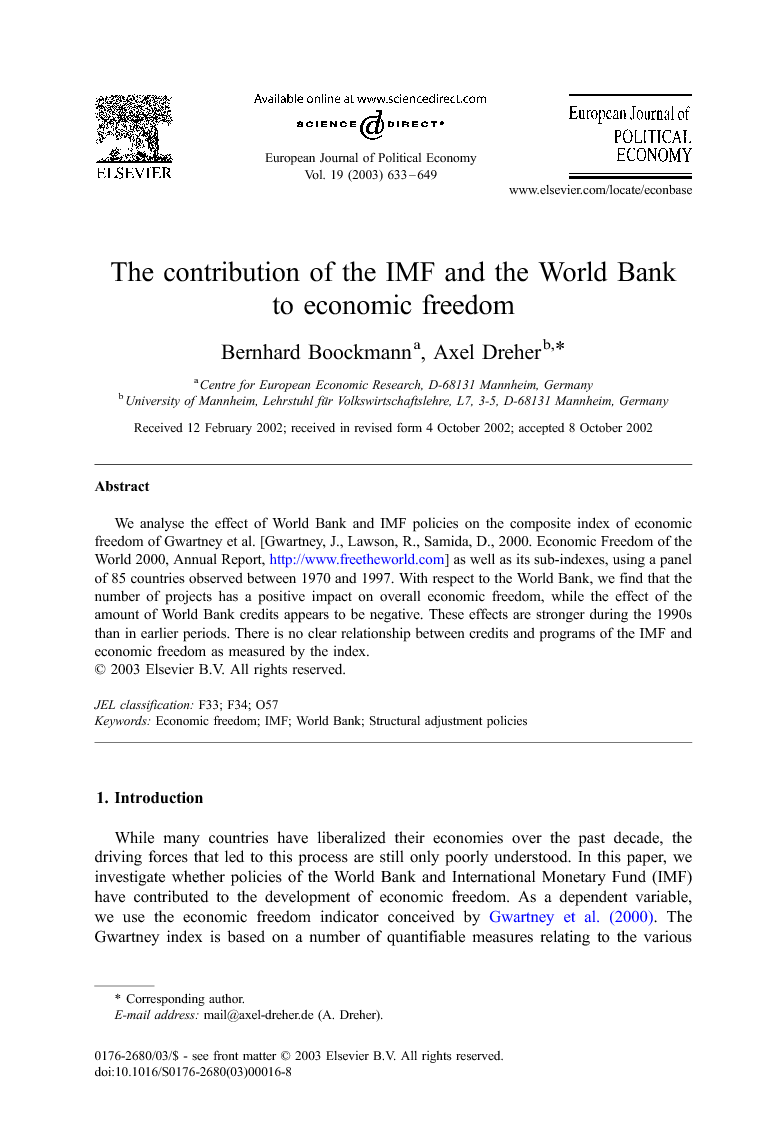 We analyse the effect of World Bank and IMF policies on the composite index of economic freedom of Gwartney et al. [Gwartney, J., Lawson, R., Samida, D., 2000. Economic Freedom of the World 2000, Annual Report, http://www.freetheworld.com] as well as its sub-indexes, using a panel of 85 countries observed between 1970 and 1997. With respect to the World Bank, we find that the number of projects has a positive impact on overall economic freedom, while the effect of the amount of World Bank credits appears to be negative. These effects are stronger during the 1990s than in earlier periods. There is no clear relationship between credits and programs of the IMF and economic freedom as measured by the index.

While many countries have liberalized their economies over the past decade, the driving forces that led to this process are still only poorly understood. In this paper, we investigate whether policies of the World Bank and International Monetary Fund (IMF) have contributed to the development of economic freedom. As a dependent variable, we use the economic freedom indicator conceived by Gwartney et al. (2000). The Gwartney index is based on a number of quantifiable measures relating to the various dimensions of economic freedom. Seven subgroups of variables, relating to the size of government, the structure of the economy, the freedom to trade and others, are aggregated into the comprehensive index. The different components of the index are presented below.1 Economic freedom has frequently been used as an independent variable in order to explain country-specific growth rates De Haan and Sturm, 2000, Dawson, 1998, De Haan and Siermann, 1998, Heckelman and Stroup, 2000, De Vanssay and Spindler, 1994 and Przeworski and Limongi, 1993. Other papers attempt to explain the emergence of economic freedom. Lal (1987), Dawson (1998) and De Haan and Sturm (2003) investigate the political preconditions under which economic reforms become viable. There is some similarity to the question of what are the determinants of political liberty (see Feng and Zak, 1999). Farr et al. (1998) explicitly address the issue of dual causality between economic well-being and economic freedom using tests for Granger causality. The impact of international organizations on freedom has, however, not been previously addressed in the literature. This provides a main motivation of the paper. The second strand of literature to which this paper contributes concerns the effects of the international financial institutions (IFIs) on the economies of the recipient countries. In spite of the long-term nature of adjustment lending, most studies of World Bank and IMF lending have focused on short-term impacts and objectives not under the direct control of the authorities.2 However, a more meaningful test of the influence of international organizations on creditors’ economies should focus on long-term developments. IMF and World Bank programs, even if classified as failures with respect to their specific goals, may nevertheless be important in changing attitudes in developing countries. Advice of the international organizations is often discussed publicly and may influence politics in the longer run (Killick, 1994). According to Fischer (2001), one of the IMF's main contributions to reforms is that it stands consistently for a particular approach to economic policy. Therefore, the long-run impact of the IFIs reaches beyond the immediate effects of conditions and finance. The focus on policies rather than outcomes provides a third motivation for the paper. Rather than looking at economic variables such as the growth rate of GDP as a result of participation in programs, we compare policies chosen by participating governments to the policies chosen by non-participants. While it may be over-ambitious to link international institutions and economic outcomes, it may be feasible to find a link between the former and the choice of policy instruments (Dhonte, 1997). Finally, a proper assessment of the IFIs' effects on economic policies is also desirable in view of the ongoing debate on the future role of these institutions.

Our estimates suggest that the effect of the IFIs on economic freedom is ambiguous. The number of World Bank projects increases economic freedom, while the volume of World Bank credits may actually reduce freedom. This finding applies not only to the composite freedom index, but also to the individual index components, in spite of the fact that the index components cover very different areas of economic policy, such as monetary or fiscal policy, the quality of the legal system, or barriers to trade. The results are stronger for the time after 1990 than for earlier periods. In our interpretation, the number of programs increases freedom because it increases both the conditions imposed by the IFIs and the number of contacts between them and national politicians, which raises the transfer of knowledge. However, if the level of financing associated with the programs rises, this eases policy constraints for governments, which has a negative impact on governments' willingness to undertake reforms. As the results show, World Bank projects are more likely to improve economic freedom than are IMF programs. Programs of the latter institution have, according to our estimates, not led to changes in structural, growth-oriented policies as measured by the index, except in certain specific policy areas. This endorses recent criticism of the IMF that calls for scaling back the mandate of the Fund in order to restrain its activities to key areas of expertise, providing short term balance of payments credits, and to let the World Bank deal with development goals Meltzer and Sachs, 2000 and International Financial Institutions Advisory Commission, 1999.