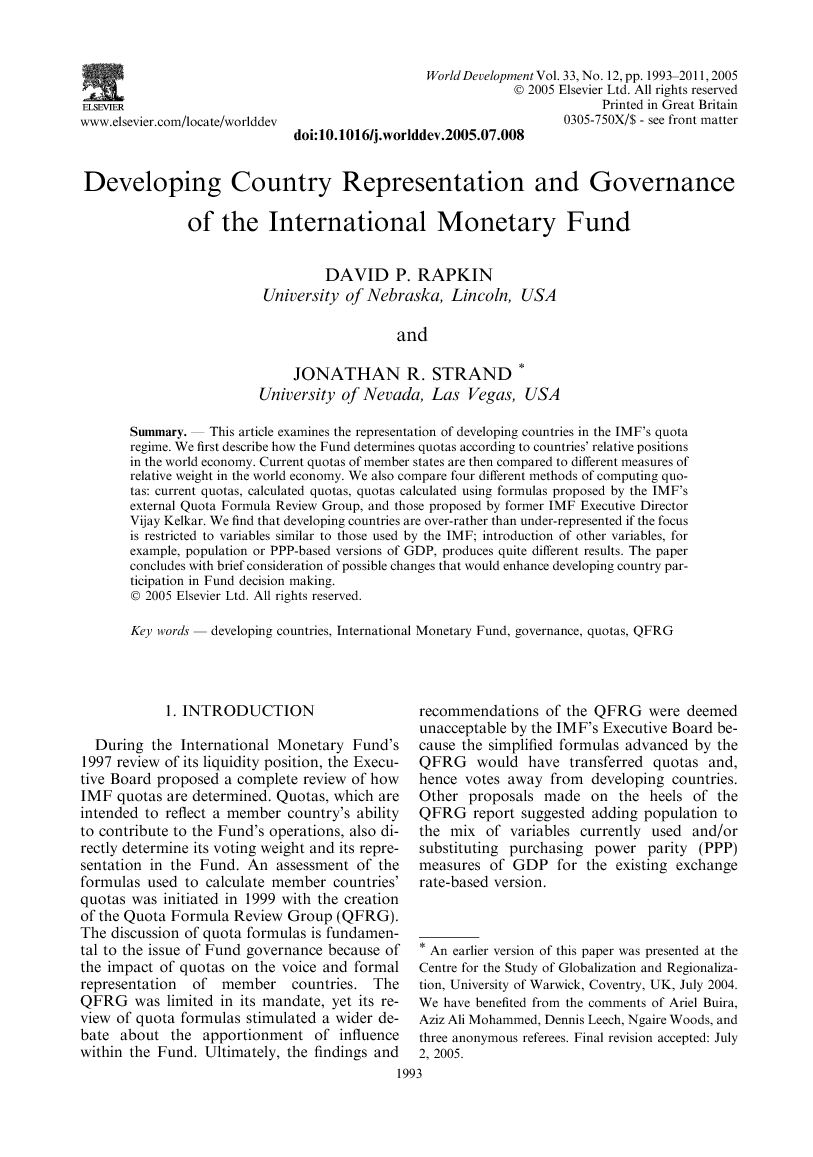 This article examines the representation of developing countries in the IMF’s quota regime. We first describe how the Fund determines quotas according to countries’ relative positions in the world economy. Current quotas of member states are then compared to different measures of relative weight in the world economy. We also compare four different methods of computing quotas: current quotas, calculated quotas, quotas calculated using formulas proposed by the IMF’s external Quota Formula Review Group, and those proposed by former IMF Executive Director Vijay Kelkar. We find that developing countries are over-rather than under-represented if the focus is restricted to variables similar to those used by the IMF; introduction of other variables, for example, population or PPP-based versions of GDP, produces quite different results. The paper concludes with brief consideration of possible changes that would enhance developing country participation in Fund decision making.

During the International Monetary Fund’s 1997 review of its liquidity position, the Executive Board proposed a complete review of how IMF quotas are determined. Quotas, which are intended to reflect a member country’s ability to contribute to the Fund’s operations, also directly determine its voting weight and its representation in the Fund. An assessment of the formulas used to calculate member countries’ quotas was initiated in 1999 with the creation of the Quota Formula Review Group (QFRG). The discussion of quota formulas is fundamental to the issue of Fund governance because of the impact of quotas on the voice and formal representation of member countries. The QFRG was limited in its mandate, yet its review of quota formulas stimulated a wider debate about the apportionment of influence within the Fund. Ultimately, the findings and recommendations of the QFRG were deemed unacceptable by the IMF’s Executive Board because the simplified formulas advanced by the QFRG would have transferred quotas and, hence votes away from developing countries. Other proposals made on the heels of the QFRG report suggested adding population to the mix of variables currently used and/or substituting purchasing power parity (PPP) measures of GDP for the existing exchange rate-based version. Developing countries are major stakeholders in the international financial institutions and, as such, their participation “requires that affected parties have access to decision making and power so that they acquire a meaningful stake in the work of the institution” (Woods, 1999, p. 44). Although in principle all IMF members may access Fund resources, because of their access to expanded private capital markets, no developed country has done so since 1978. In consequence, a kind of role polarization—between debtor developing countries and creditor developed countries—has crystallized. Developing countries are the “users” of the IMF, while their developed counterparts, who dominate rule making, “do not use the institutions and do not, therefore, have to live with the consequences and failures of their policies” (Caliari & Schroeder, 2003, p. 2). But this is not to say that the developed countries provide all of the Fund’s resources, as the developing members’ debt service is a major source of the IMF’s operational funds. As one (un-named) Executive Director from a developing country observed: “The industrial countries provide the capital, but the Fund does not spend the capital, it loans it. The developing countries are paying the interest that keeps the institution running” (quoted in Bichsel, 1994, p. 148).1 This paper examines the claims that developing countries are under-represented in the IMF. If developing countries are under-represented, we expect to find that they have a lower share of the Fund’s quotas than their share of world product and other economic measures. The next section provides some necessary context by describing IMF’s decision rules, including the methods by which the Fund determines quotas according to countries’ relative positions in the world economy. We find that the IMF’s quota determination and voting regime is a rather complex “can of worms” that, once opened, leads to consideration of more and more issues. In the following section, we present data that divide IMF members into income-based categories used by the World Bank and, for each category, compare current quotas to different measures of relative weight in the world economy. We then compare four quota values: current quotas, calculated quotas, quotas calculated using formulas proposed by the QFRG, and two proposed by former IMF Executive Director Vijay Kelkar. The three alternative proposals represent quite different visions of how voting weight should be distributed: the former would increase the extent to which voting weights are determined in direct proportion to economic size and power, while the latter two seek a more egalitarian distribution that gives greater importance to the sovereign equality of states and/or to population. Overall, we find that developing countries are over- rather than under-represented if we restrict our focus to variables similar to those used by the IMF, though the quotas and voting shares of the vast majority remain diminutive by any standard. This situation has resulted from well-meaning, but ultimately ineffective, efforts by the IMF over the decades to bend its procedures in order to provide a more meaningful and effective voice to developing countries. We conclude that these problems are not likely to be fixed by either reallocating quotas within the existing IMF system or by tinkering with the quota-determination formulas.

The results of our scrutiny of IMF quotas suggest that it will not be possible to afford more representation for developing countries by tinkering on the margins of the existing quota-determination regime. Over the life of this regime, piecemeal efforts to redress the miniscule quotas and votes of developing countries, while well intentioned, have failed to solve the problem of providing quotas and voting weights that enable meaningful representation and participation for 184 member countries, among which there are gross disparities of wealth and power. So long as the same variables (especially exchange rate versions of GDP) are used to gauge relative importance in the world economy and so long as the proportion of basic votes continues to dwindle, subsequent efforts will of necessity continue to be piecemeal and their results short lived. Two alternatives—shifting to PPP-based measures of GDP and increasing basic votes to a set proportion—could have significant positive effects for developing countries. The latter, in particular, would restore some semblance of balance between the contending regime principles for allocating representation: according to wealth and power or in closer conformity with the sovereign equality of member states. As we have argued elsewhere, however, there is a better way to reorder IMF decision rules (Strand & Rapkin, 2005). A double majority system, in which initiatives would have to secure both a majority of countries and a majority of weighted votes, would provide a cleaner way to reconcile the contending regime principles. Weighted votes could be determined in strict accordance with shares of world product, basic votes could be eliminated, and the extent of developing countries’ access to IMF resources could be determined by a separate formula based on instability in the capital and current accounts. Unfortunately, what presently stands in the way of any of the reforms discussed is the unwillingness of the developed countries, especially the United States, to countenance any changes that would diminish their control of this critically important international institution.