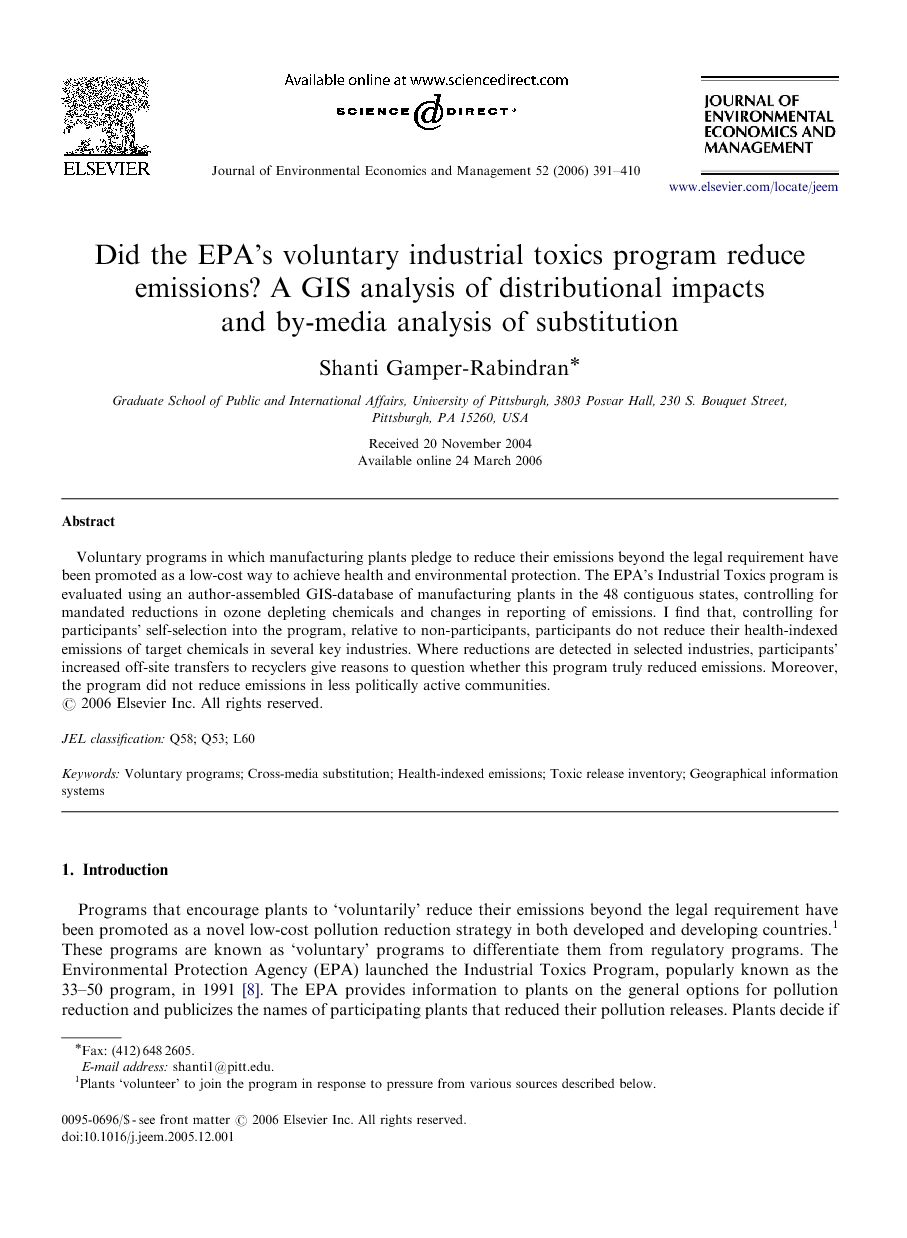 Voluntary programs in which manufacturing plants pledge to reduce their emissions beyond the legal requirement have been promoted as a low-cost way to achieve health and environmental protection. The EPA's Industrial Toxics program is evaluated using an author-assembled GIS-database of manufacturing plants in the 48 contiguous states, controlling for mandated reductions in ozone depleting chemicals and changes in reporting of emissions. I find that, controlling for participants’ self-selection into the program, relative to non-participants, participants do not reduce their health-indexed emissions of target chemicals in several key industries. Where reductions are detected in selected industries, participants’ increased off-site transfers to recyclers give reasons to question whether this program truly reduced emissions. Moreover, the program did not reduce emissions in less politically active communities.

Programs that encourage plants to ‘voluntarily’ reduce their emissions beyond the legal requirement have been promoted as a novel low-cost pollution reduction strategy in both developed and developing countries.1 These programs are known as ‘voluntary’ programs to differentiate them from regulatory programs. The Environmental Protection Agency (EPA) launched the Industrial Toxics Program, popularly known as the 33–50 program, in 1991 [8]. The EPA provides information to plants on the general options for pollution reduction and publicizes the names of participating plants that reduced their pollution releases. Plants decide if they wish to participate and their reductions goals and strategies. Numerous other voluntary programs, such as the trade-association-managed Responsible Care program in the chemical sector, and the ISO 14000 standards, a third-party international certification program, have been adopted in both developed and developed countries. Despite growing reliance on these programs, evidence is limited on the appropriate scope for these voluntary programs [1]. When do voluntary programs attract participants and do participants reduce emissions? This study evaluates the impact of the voluntary 33–50 program on plant-level emissions using self-reported emissions data from the public disclosure program, i.e. the Toxic Release Inventory program (TRI) [6]. This study does not evaluate the impact of the TRI program on plant-level emissions, though the analysis of the self-reported TRI data can yield lessons for improving the design of the TRI program. This reassessment of the impact of the Industrial Toxics program, using a GIS-based author-assembled plant-level data for the manufacturing sector in the 48 contiguous US states, improves upon important earlier studies [3], [4] and [16]. My two-part empirical study looks at, first, factors that influence plant's participation and second, the program's impact on emissions. The study extends the analysis of factors that influence program participation in three ways. First, I examine the influence of community pressure using newly available geo-coded data from the EPA on plant location. Previously available self-reported data on plants’ latitudes and longitudes are unreliable [9]. Second, I examine the influence of investor pressure, by comparing plants owned by publicly traded firms and by non-publicly traded firms. Prior studies have focused solely on the former. Third, I examine whether plants that have poor compliance records are less likely to join. If non-compliant plants were less likely to join such programs, voluntary programs would not be effective tools to reduce the emissions for a problematic subset of plants. The study improves upon the assessment of the impact of the 33–50 program in four ways. First, I account for mandatory reductions in chemicals and ‘paper reductions’ stemming from reporting changes that, if unaccounted for, may bias the analysis towards favorable assessments of the program's impact. Second, to capture the public health impact of reduced emissions, I analyze emissions indexed by the EPA's newly available toxicity weights [9]. Third, I examine whether the program's design inadvertently led to negative outcomes. In light of the program's exclusion of plants’ off-site transfers to recyclers in the assessment of plants’ performance, I ask whether plants reduced their reported emissions in other categories but increased their reported emissions into this excluded category. Given the focus of the program and public dissemination activity on reducing the pounds of emissions, I ask whether plants substituted to more concentrated but toxic chemicals. Fourth, to address ‘environmental justice’ concerns, I examine if the program reduced emissions selectively in neighborhoods that are richer, white, and more politically active.