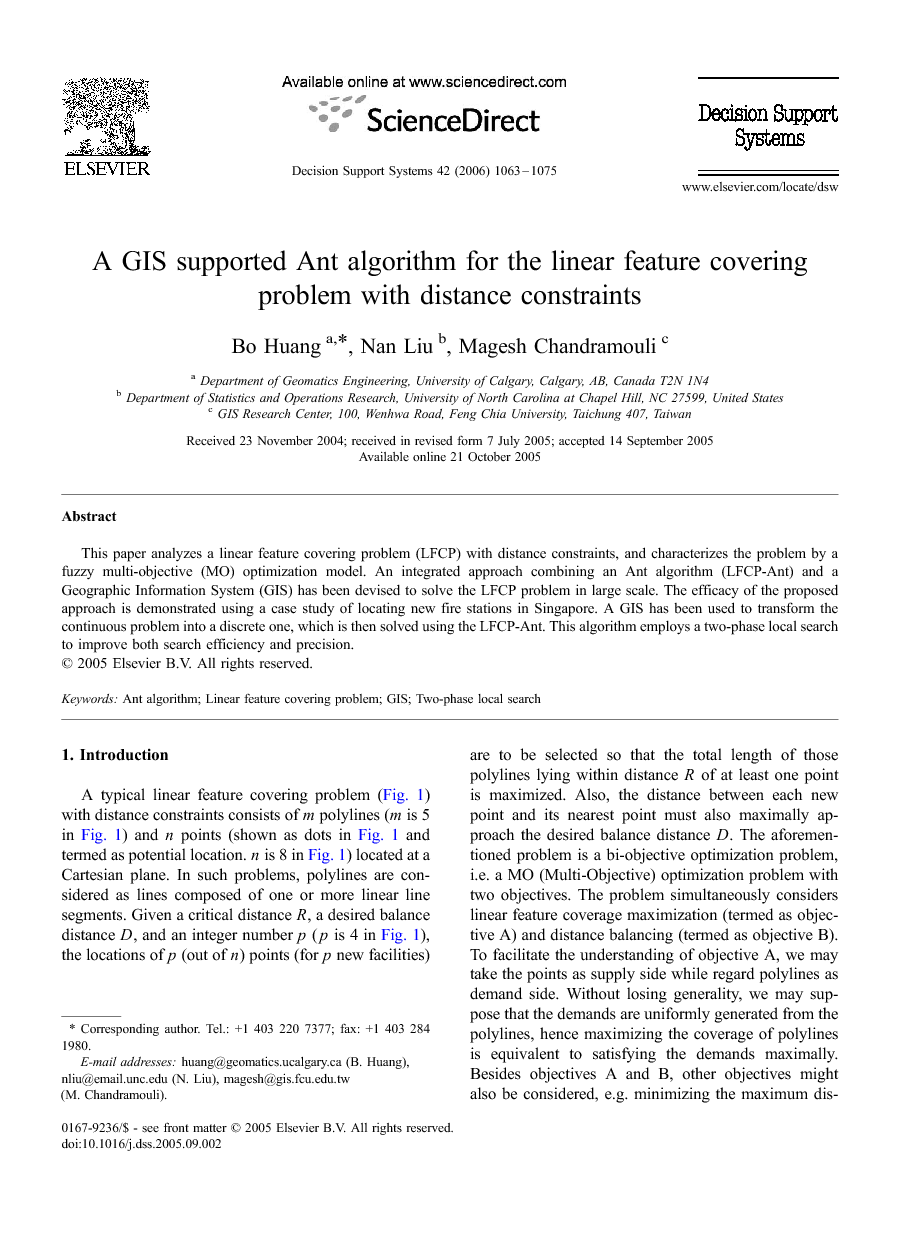 This paper analyzes a linear feature covering problem (LFCP) with distance constraints, and characterizes the problem by a fuzzy multi-objective (MO) optimization model. An integrated approach combining an Ant algorithm (LFCP-Ant) and a Geographic Information System (GIS) has been devised to solve the LFCP problem in large scale. The efficacy of the proposed approach is demonstrated using a case study of locating new fire stations in Singapore. A GIS has been used to transform the continuous problem into a discrete one, which is then solved using the LFCP-Ant. This algorithm employs a two-phase local search to improve both search efficiency and precision.

This paper has presented a general fuzzy MO optimization model to describe the linear feature covering problem with distance constraints, and the solution through the use of a GIS-supported Ant algorithm. The Ant algorithm, i.e. LFCP-Ant, consists of a two-phase local search mechanism, which makes it a universal meta-heuristic suitable for solving large-scale location problems upon a grid system. Computational comparison in the case study shows that LFCP-Ant is much more efficient and robust than the GA, TC-GA. In this paper, the distance is measured in the Euclidean form. In order to achieve more accurate results, the network distance could be employed within the transportation network. However, using network distance will increase the complexity of the problem. When evaluating objectives, one needs to calculate the network distance through the original vector map. To calculate the network distance in terms of travelling time is a non-trivial task since it involves randomness, i.e. the traffic condition on the road changes anytime. Nevertheless, this idea could lead to a challenging, yet interesting research topic. The two objectives considered are equally weighted. In the event of the local authorities changing their views and deciding to place different emphasis on any of these two objectives, the fuzzy MO model can easily be modified by assigning appropriate weights to the objectives. Furthermore, if other objectives need to be considered, the fuzzy MO modelling approach can incorporate them in an efficient and trouble-free way without destroying the original model structure. Even though this study uses only the basic functions of GIS, it has been demonstrated that integrating GIS and heuristics in location is indeed an efficient technique. The data attained from the GIS environment are fed into the heuristic algorithm, and the heuristics provides the optimal solution, which can be evaluated on a GIS platform. This continuous process serves as a prototype for the development of a decision support system incorporating both GIS and heuristic algorithms, which helps in decision making for emergency facility locations and other real-life spatial location problems.