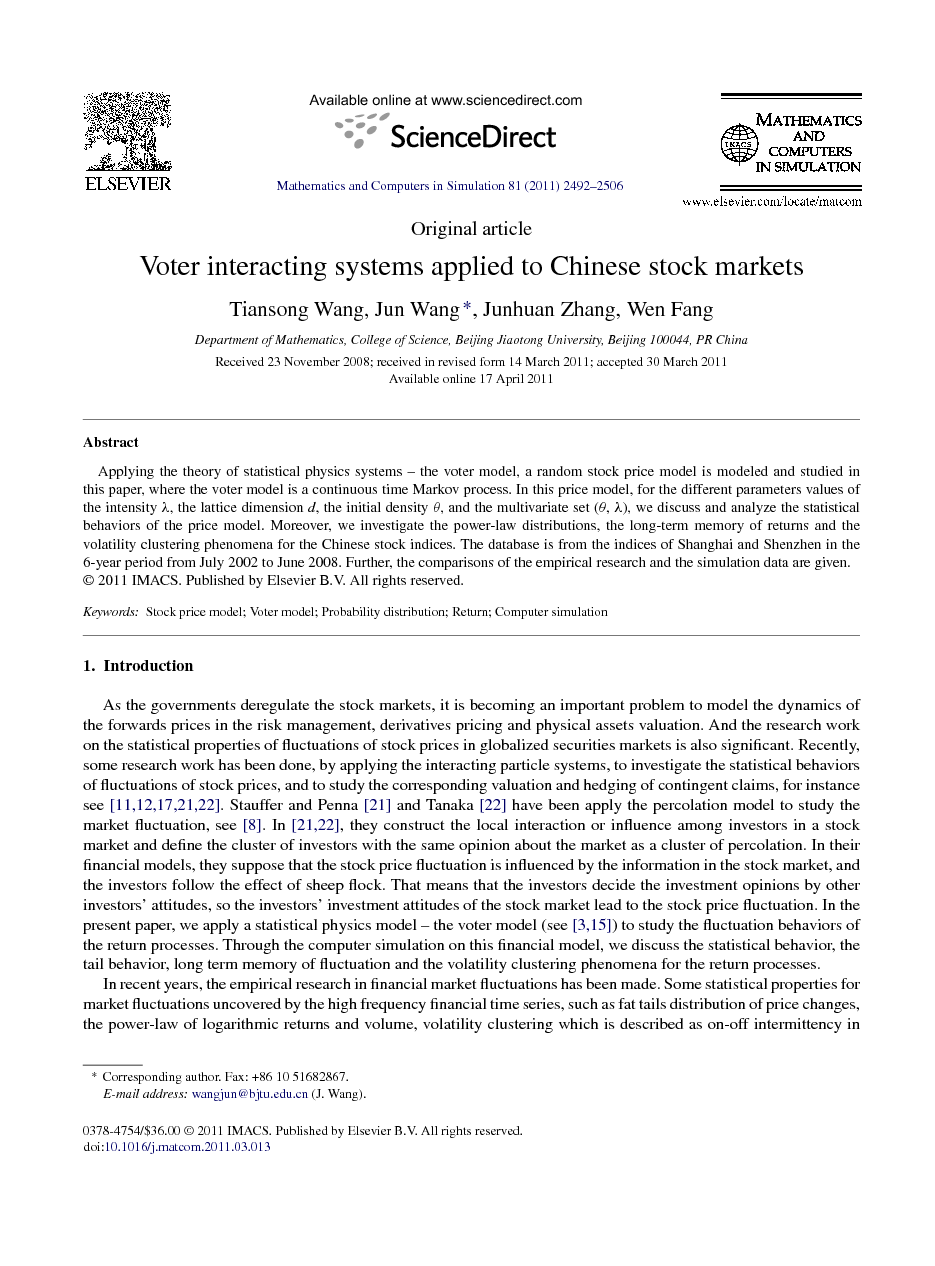 Applying the theory of statistical physics systems – the voter model, a random stock price model is modeled and studied in this paper, where the voter model is a continuous time Markov process. In this price model, for the different parameters values of the intensity λ, the lattice dimension d, the initial density θ, and the multivariate set (θ, λ), we discuss and analyze the statistical behaviors of the price model. Moreover, we investigate the power-law distributions, the long-term memory of returns and the volatility clustering phenomena for the Chinese stock indices. The database is from the indices of Shanghai and Shenzhen in the 6-year period from July 2002 to June 2008. Further, the comparisons of the empirical research and the simulation data are given.

As the governments deregulate the stock markets, it is becoming an important problem to model the dynamics of the forwards prices in the risk management, derivatives pricing and physical assets valuation. And the research work on the statistical properties of fluctuations of stock prices in globalized securities markets is also significant. Recently, some research work has been done, by applying the interacting particle systems, to investigate the statistical behaviors of fluctuations of stock prices, and to study the corresponding valuation and hedging of contingent claims, for instance see [11], [12], [17], [21] and [22]. Stauffer and Penna [21] and Tanaka [22] have been apply the percolation model to study the market fluctuation, see [8]. In [21] and [22], they construct the local interaction or influence among investors in a stock market and define the cluster of investors with the same opinion about the market as a cluster of percolation. In their financial models, they suppose that the stock price fluctuation is influenced by the information in the stock market, and the investors follow the effect of sheep flock. That means that the investors decide the investment opinions by other investors’ attitudes, so the investors’ investment attitudes of the stock market lead to the stock price fluctuation. In the present paper, we apply a statistical physics model – the voter model (see [3] and [15]) to study the fluctuation behaviors of the return processes. Through the computer simulation on this financial model, we discuss the statistical behavior, the tail behavior, long term memory of fluctuation and the volatility clustering phenomena for the return processes. In recent years, the empirical research in financial market fluctuations has been made. Some statistical properties for market fluctuations uncovered by the high frequency financial time series, such as fat tails distribution of price changes, the power-law of logarithmic returns and volume, volatility clustering which is described as on-off intermittency in literature of nonlinear dynamics, and multifractality of volatility, etc., see [1], [5], [6], [7], [9], [10], [12], [14], [16], [17], [18] and [19]. China has two stock markets, Shanghai Stock Exchange and Shenzhen Stock Exchange, and the indices studied in this paper are Shanghai Stock Exchange Composite Index (SSECI) and Shenzhen Stock Exchange Component Index (SZSECI). These two indices play an important role in Chinese stock markets and Chinese economic systems. In this paper, we analyze the daily data of SSECI and SZSECI from July 1st 2002 to June 30th 2008, and study the fluctuation properties of SSECI and SZSECI. The database of the indices is from the websites www.sse.com.cn and www.szse.cn. First, we give the brief definitions and properties of the voter model, and also we introduce the graphical representation of the model, since the graphical representation is necessary for our computer simulations. One interpretation for the voter model is, for a collection of individuals, each of which has one of two possible positions on a political issue, at independent exponential times, an individual reassesses his view by choosing a neighbor at random with certain probabilities and then adopting his position. Specifically, the voter model is one of the statistical physics models, we think of the sites of the d-dimensional integer lattice as being occupied by persons who either in favor of or opposed to some issue. To write this as a set-valued process, we let ηs is the set of voters in favor, we can also think of the sites in ηs as being occupied by cancer cells, and the other sites as being occupied by healthy cells. We can formulate the dynamics as follows: (i) an occupied site becomes vacant at a rate equal to the number of the vacant neighbors; (ii) an vacant site becomes occupied at a rate equal to λ times the number of the occupied neighbors, where λ is a intensity which is called the “carcinogenic advantage” in voter model. When λ = 1, the model is called the voter model, and when λ > 1, the model is called the biased voter model.

In the paper, we introduce a stock price model by applying the voter system to study the behaviors of the fluctuations for the stock markets. We discuss the statistical properties of the model for the intensity λ, the lattice dimension d, the initial density θ, and the multivariate set (θ, λ). And we compare the properties of the simulation data with those of the two groups of data from Shanghai stock market and Shenzhen stock market, including the power-law behavior, the long term memory and the volatility clustering phenomena. Through the comparisons between the real markets and the simulation market, we hope to show that the financial model of the present paper is reasonable to some extent.