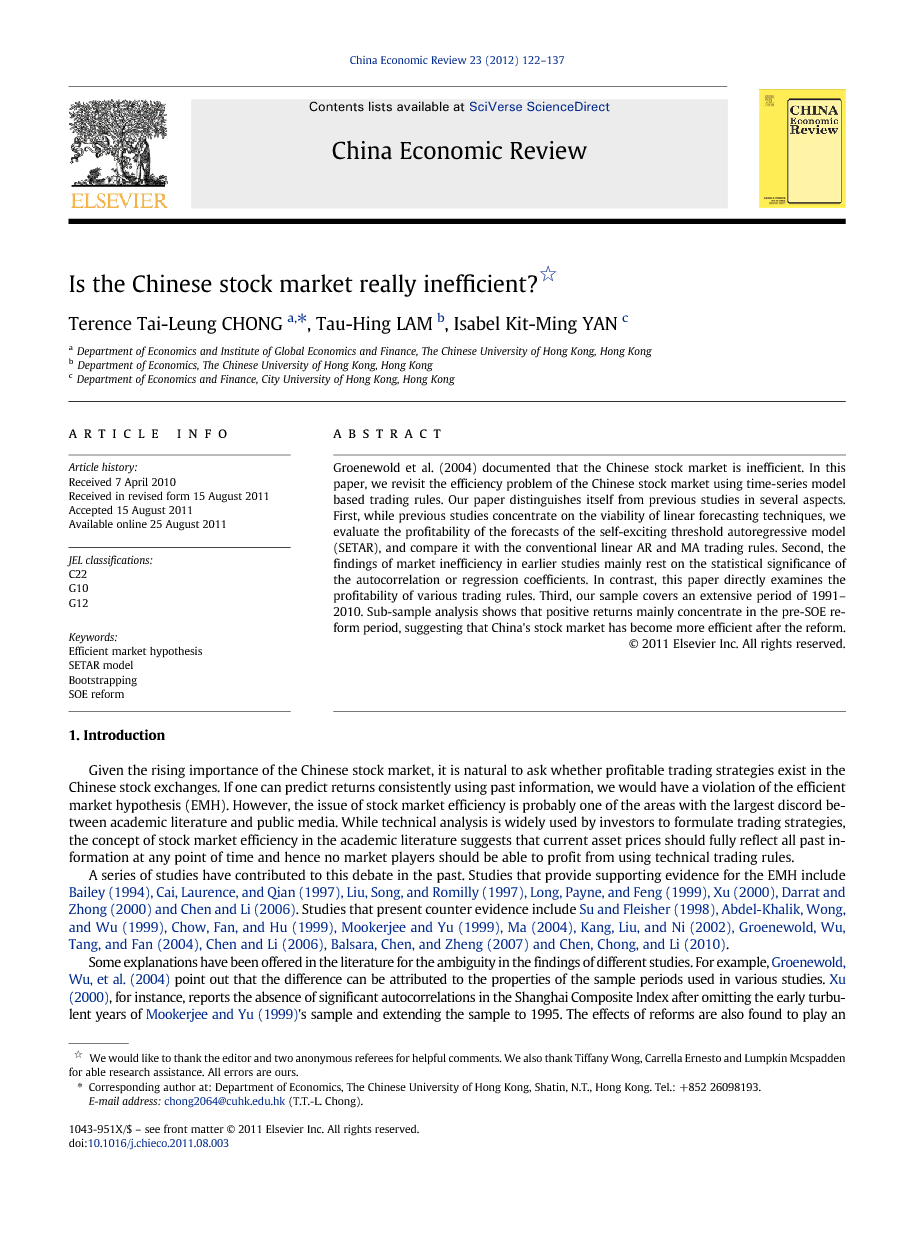 Groenewold et al. (2004) documented that the Chinese stock market is inefficient. In this paper, we revisit the efficiency problem of the Chinese stock market using time-series model based trading rules. Our paper distinguishes itself from previous studies in several aspects. First, while previous studies concentrate on the viability of linear forecasting techniques, we evaluate the profitability of the forecasts of the self-exciting threshold autoregressive model (SETAR), and compare it with the conventional linear AR and MA trading rules. Second, the findings of market inefficiency in earlier studies mainly rest on the statistical significance of the autocorrelation or regression coefficients. In contrast, this paper directly examines the profitability of various trading rules. Third, our sample covers an extensive period of 1991–2010. Sub-sample analysis shows that positive returns mainly concentrate in the pre-SOE reform period, suggesting that China's stock market has become more efficient after the reform.

Given the rising importance of the Chinese stock market, it is natural to ask whether profitable trading strategies exist in the Chinese stock exchanges. If one can predict returns consistently using past information, we would have a violation of the efficient market hypothesis (EMH). However, the issue of stock market efficiency is probably one of the areas with the largest discord between academic literature and public media. While technical analysis is widely used by investors to formulate trading strategies, the concept of stock market efficiency in the academic literature suggests that current asset prices should fully reflect all past information at any point of time and hence no market players should be able to profit from using technical trading rules. A series of studies have contributed to this debate in the past. Studies that provide supporting evidence for the EMH include Bailey, 1994, Cai et al., 1997, Liu et al., 1997, Long et al., 1999, Xu, 2000, Darrat and Zhong, 2000 and Chen and Li, 2006. Studies that present counter evidence include Su and Fleisher, 1998, Abdel-Khalik et al., 1999, Chow et al., 1999, Mookerjee and Yu, 1999, Ma, 2004, Kang et al., 2002, Groenewold, Tang and Wu, 2004, Chen and Li, 2006, Balsara et al., 2007 and Chen et al., 2010. Some explanations have been offered in the literature for the ambiguity in the findings of different studies. For example, Groenewold, Wu, et al. (2004) point out that the difference can be attributed to the properties of the sample periods used in various studies. Xu (2000), for instance, reports the absence of significant autocorrelations in the Shanghai Composite Index after omitting the early turbulent years of Mookerjee and Yu (1999)'s sample and extending the sample to 1995. The effects of reforms are also found to play an important role. Groenewold, Tang, and Wu (2003) find that the efficiency of the stock market tends to improve after the banks were re-admitted in 2000.1 Another study by Wang, Liu, and Gu (2009) investigates the change of weak form efficiency brought by reform on the range of price variations. Using rolling window estimation on the daily closing price of the Shenzhen Component Index during 3 April 1991 and 15 December 2008, they conclude that the reform improved market efficiency substantially in the long run but the influence in the short run is small. In this paper, we revisit the efficiency problem of the Chinese stock market by examining the profitability of trading rules based on time series models. Following Chong and Lam (2010), we study the performance of the self-exciting threshold autoregressive (SETAR) model, the autoregressive (AR) model and the moving average (MA) model in generating profitable trading rules for the Composite Indices of the Chinese stock market. Our paper distinguishes itself from previous studies in four aspects. First, while previous studies concentrate on the viability of linear forecasting techniques, we evaluate the profitability of the SETAR forecast, and compare it with the conventional linear AR and MA trading rules.2 Second, the studies cited earlier generally apply efficiency tests (like autocorrelation coefficient tests, run tests and variance ratio tests) or linear regressions (like VAR and ARIMA models) in their analysis. Their conclusion on inefficiency mainly rests on the statistical significance of the autocorrelation coefficients or regression coefficients but not on the actual profitability of the predictive models. This paper provides an alternative to the standard EMH tests and address the question of whether the predictability found in weak EMH tests implies profitability. Third, previous studies on the Chinese Stock market focus on the A and B share indices (Cai et al., 2005 and Tian et al., 2002). In this paper, we focus on the Shanghai Composite Index and the Shenzhen Composite Index, which have received relatively little attention in the literature. To avert the data snooping problem (Sullivan, Timmerman, & White, 1999), eleven different trading rules are applied to the two composite indices. Fourth, with the exception of Balsara et al. (2007) and Chen et al. (2010), all other studies cited earlier only use data before 2002 and hence do not cover the period after major reforms like the SOE reform. Balsara et al. (2007) and Chen et al. (2010) use data up to 2005 and 2006 respectively, but still do not go much beyond the time after the SOE reform. In contrast, this paper employs data over an extensive sample period of 1991–2010. The longer sample provides us with a greater variety of information and should reflect the dramatic changes that have taken place in China's securities sector in the past decades. It also sheds light on whether the results on EMH are sensitive to the sub-periods used. The rest of this paper is organized as follows. Section 2 describes the data. Section 3 presents the models and trading strategies. Section 4 discusses the empirical results. Section 5 conducts a bootstrap analysis, and Section 6 concludes the paper.

An underlying principle of technical analysis is that historical movement of equity prices helps to predict future movement. If technical trading rules can consistently generate abnormal profits for investors, then the Efficient Market Hypothesis (EMH) of Fama (1970) is questionable. In this paper, the efficiency problem of the Chinese stock market is revisited. The Chinese stock market is of interest due to her rising role in the world financial market. While most of the earlier studies focus on the A and B shares, in this paper, we concentrate on the Shanghai and Shenzhen Composite indices. The performances of eleven trading rules derived from the SETAR, AR and MA time series models are evaluated. By dividing the data into four sub-samples (the pre-SOE reform period, the post-SOE reform period prior to the recent financial crisis, the crisis period and the post-crisis period), we find that significant positive profits are most common in the pre-SOE reform period but not in the post-reform period, which suggests that the SOE reform played an important role in improving efficiency in both Stock Exchanges. Nevertheless, if a transaction cost of around 0.5% is taken into account, these models do not warrant profitable trading opportunities. This finding is consistent with that of Balsara et al., 2007 and Wong et al., 2009.