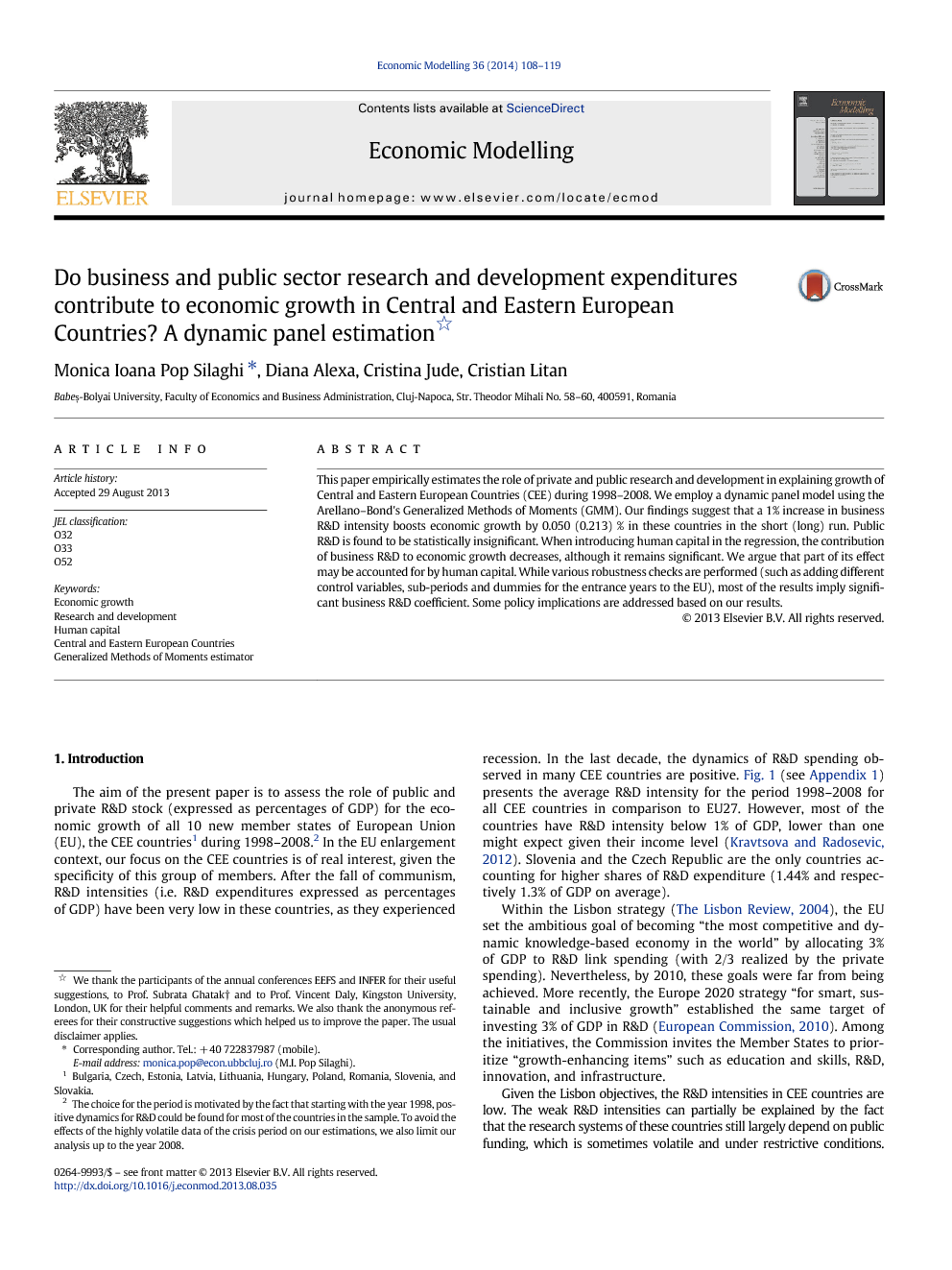 This paper empirically estimates the role of private and public research and development in explaining growth of Central and Eastern European Countries (CEE) during 1998–2008. We employ a dynamic panel model using the Arellano–Bond's Generalized Methods of Moments (GMM). Our findings suggest that a 1% increase in business R&D intensity boosts economic growth by 0.050 (0.213) % in these countries in the short (long) run. Public R&D is found to be statistically insignificant. When introducing human capital in the regression, the contribution of business R&D to economic growth decreases, although it remains significant. We argue that part of its effect may be accounted for by human capital. While various robustness checks are performed (such as adding different control variables, sub-periods and dummies for the entrance years to the EU), most of the results imply significant business R&D coefficient. Some policy implications are addressed based on our results.

The aim of the present paper is to assess the role of public and private R&D stock (expressed as percentages of GDP) for the economic growth of all 10 new member states of European Union (EU), the CEE countries1 during 1998–2008.2 In the EU enlargement context, our focus on the CEE countries is of real interest, given the specificity of this group of members. After the fall of communism, R&D intensities (i.e. R&D expenditures expressed as percentages of GDP) have been very low in these countries, as they experienced recession. In the last decade, the dynamics of R&D spending observed in many CEE countries are positive. Fig. 1 (see Appendix 1) presents the average R&D intensity for the period 1998–2008 for all CEE countries in comparison to EU27. However, most of the countries have R&D intensity below 1% of GDP, lower than one might expect given their income level (Kravtsova and Radosevic, 2012). Slovenia and the Czech Republic are the only countries accounting for higher shares of R&D expenditure (1.44% and respectively 1.3% of GDP on average). Within the Lisbon strategy (The Lisbon Review, 2004), the EU set the ambitious goal of becoming “the most competitive and dynamic knowledge-based economy in the world” by allocating 3% of GDP to R&D link spending (with 2/3 realized by the private spending). Nevertheless, by 2010, these goals were far from being achieved. More recently, the Europe 2020 strategy “for smart, sustainable and inclusive growth” established the same target of investing 3% of GDP in R&D (European Commission, 2010). Among the initiatives, the Commission invites the Member States to prioritize “growth-enhancing items” such as education and skills, R&D, innovation, and infrastructure. Given the Lisbon objectives, the R&D intensities in CEE countries are low. The weak R&D intensities can partially be explained by the fact that the research systems of these countries still largely depend on public funding, which is sometimes volatile and under restrictive conditions. Therefore, the need for European Union is to focus not only on the amount of R&D but also on its composition and one strong recommendation of the EU Commission is to improve the conditions for private R&D sector in the union. The above presented aspects enhance the motivation of our work. It is an ongoing debate on how to allocate between different types of R&D, such as public and private. Fig. 2 (Appendix 1) shows the changes of the two types of R&D between 1998 and 2008. The distribution of R&D expenditures by public and private funds has evolved quite differently. On average, the dynamics of private R&D has surpassed public R&D, in line with the Lisbon objectives. However, the increase in private R&D is very heterogeneous among the CEE countries: significant increase in Estonia and Slovenia, while Romania, Slovakia and Poland show a decrease. The high shares of public R&D in the latter group of countries partly compensate the weak business R&D intensity. Nevertheless, compared with the modest levels of R&D investment, all CEE countries are characterized by relatively high levels of human capital. Despite a certain mismatch between supply and demand of labor in CEE countries, an important level of human capital may favor social returns of R&D. To the best of our knowledge there is no panel study to assess the role of R&D for the economic growth for the whole group of CEE countries.3 Our original approach relies in splitting between private and public R&D, which brings an important contribution to the existing literature. Moreover, since possible complementarity between human capital and R&D is depicted in the growth theory (see Redding, 1996 and Romer, 1990), we also include human capital in our empirical setting. To accomplish our goals, we employ a dynamic panel estimation using the Arellano–Bond Generalized Method of Moments (GMM), based on a production function approach. The advantage of the first-differenced GMM estimator is that it is robust in the presence of endogenous covariates, allowing for individual fixed effects, heteroskedasticity and autocorrelation within the cross-section units.4 Our findings depict a significant coefficient for business R&D and confirm the hypothesis that human capital could play a role for the absorptive capacity of new technologies. The strong implication of our research is that governments should stimulate business (private) R&D. Based on our results, reflective points may be raised for the policy makers regarding the differences of the quality of the two types of R&D that should be analyzed and also the channels of cooperation between all the participants in the innovative systems that need to be improved. The remainder of this paper is as follows: Section 2 presents a brief review of the relevant theoretical and empirical literature, Section 3 presents the methodology and the data, Section 4 presents the results, while Section 5 concludes and discusses the policy implications of the current work.

Our results show a statistically significant impact of R&D business on economic growth. Public R&D, although not significant, does not crowd out the positive effect of private R&D in the estimations. When human capital is included, it is highly significant at 1% while the business R&D coefficient decreases, confirming its overestimation if human capital factor is not specifically accounted for. In the presence of a variety of control macroeconomic variables, R&D business and human capital remain significant. The significance for business R&D coefficient remains robust to estimating on certain sub-periods, including the dummy years for the entrance to the EU (2004 and 2007) or averaging on sub-periods. We acknowledge that there are certain limits of the proposed research. Although instrumenting FDI and R&D for possible endogeneity with output growth, the causal link between FDI, respectively R&D, with growth is not statistically inferable from our estimations. Moreover, Hauk and Wacziarg (2009) note that with reverse causality in regressors, for small samples, the Arellano–Bond GMM estimator may not eliminate the bias. The Arellano–Bond GMM estimator overstates the speed of convergence under a wide variety of assumptions and bias towards zero the slope estimates on the human and physical capital accumulation variables. However, we applied the small sample correction methods proposed by Windmeijer (2005) to avoid underestimations in small samples generated by standard asymptotic errors estimated through a two-step GMM estimator. Our depicted significant business R&D coefficient may raise important policy implications. R&D expenditure in the private sector is an important indicator of innovation activities. The governments should be actively engaged and promote innovative activity in firms through tax credits and subsidies and through direct spending on education and training, patent protection, regulation and competition policy. Besides these traditional ways, national governments may try to boost innovative activities by offering incentives and prizes to firms that come with exceptional innovations. Our results show that the public R&D has a neutral effect, in the sense that it does not stimulate growth, but it does not crowd out the positive effect of private R&D either. Given our results for both business and public R&D coefficients, some reflective points may be raised for policy makers (and also researchers) in CEE countries. First, the differences that exist in the quality of the two types of R&D should be analyzed. Secondly, one may want to understand if it is possible that higher shares of public R&D to be just a venue for specialists' formation, the best of which being absorbed within the private sector when getting to professional maturity, and thus providing very productive innovations for this sector. If such a context proves real, an important question may be raised: should policy makers stimulate business R&D, stimulate public R&D or stimulate both? Based on this feature of our results as possible hypotheses generators, it would be interesting to test for the future the following hypothesis. That is, would a higher level of R&D spending on academic research, for instance, act as a stimulus for business R&D? All in all, our results suggest that policy in CEE countries should put more focus on the distinction between private and public R&D. More policy implication could be possible if data availability would allow including in the analysis output measures of R&D (such as patents). To see if our results are further validated, it would be interesting to analyse the magnitude of R&D spillovers at the disaggregated level-based on larger and more comprehensive samples. Also, more theory-based hypotheses should be developed to investigate the interactions among human capital, innovation and foreign direct investments in CEE countries.