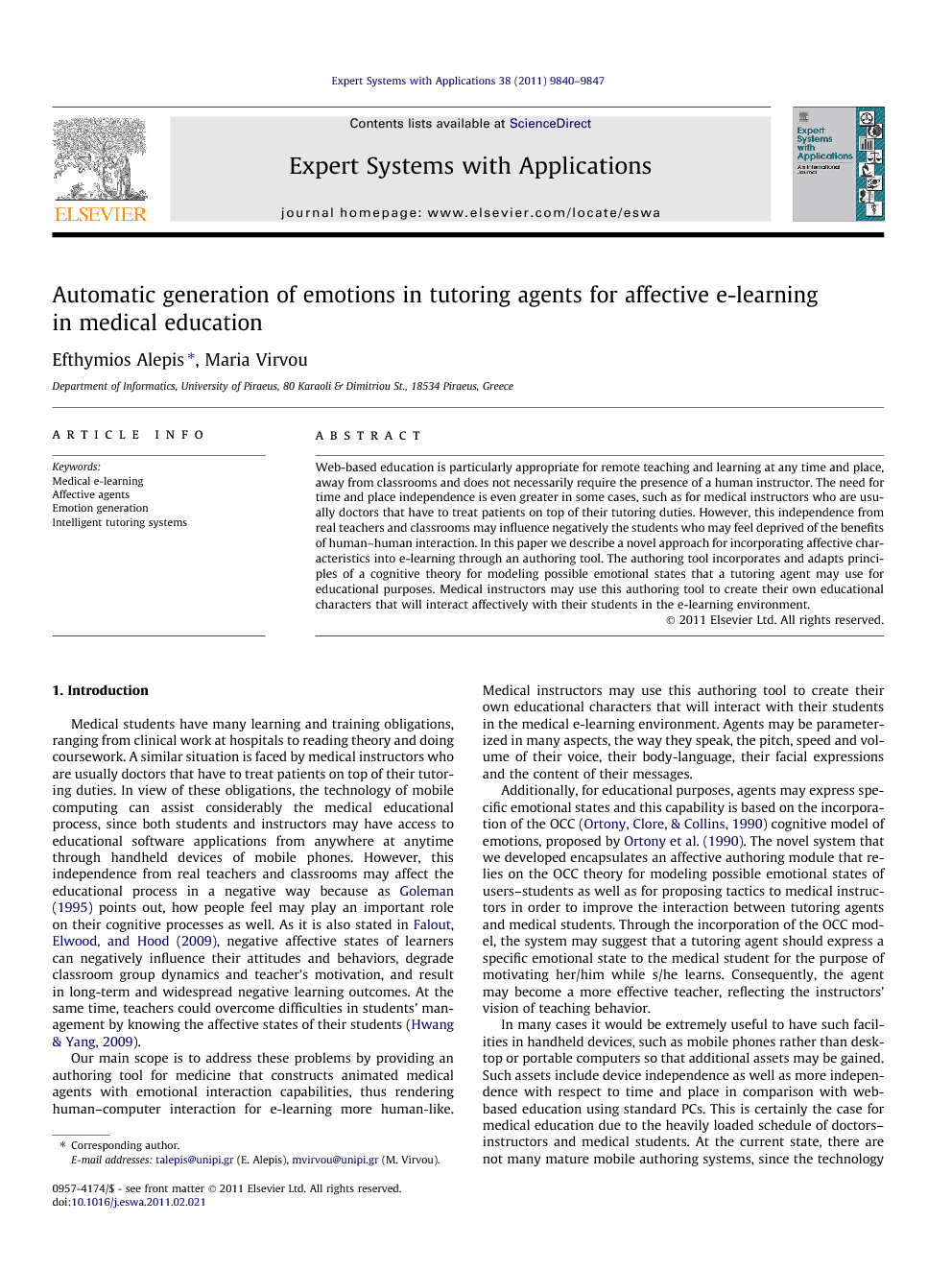 Web-based education is particularly appropriate for remote teaching and learning at any time and place, away from classrooms and does not necessarily require the presence of a human instructor. The need for time and place independence is even greater in some cases, such as for medical instructors who are usually doctors that have to treat patients on top of their tutoring duties. However, this independence from real teachers and classrooms may influence negatively the students who may feel deprived of the benefits of human–human interaction. In this paper we describe a novel approach for incorporating affective characteristics into e-learning through an authoring tool. The authoring tool incorporates and adapts principles of a cognitive theory for modeling possible emotional states that a tutoring agent may use for educational purposes. Medical instructors may use this authoring tool to create their own educational characters that will interact affectively with their students in the e-learning environment.

Medical students have many learning and training obligations, ranging from clinical work at hospitals to reading theory and doing coursework. A similar situation is faced by medical instructors who are usually doctors that have to treat patients on top of their tutoring duties. In view of these obligations, the technology of mobile computing can assist considerably the medical educational process, since both students and instructors may have access to educational software applications from anywhere at anytime through handheld devices of mobile phones. However, this independence from real teachers and classrooms may affect the educational process in a negative way because as Goleman (1995) points out, how people feel may play an important role on their cognitive processes as well. As it is also stated in Falout, Elwood, and Hood (2009), negative affective states of learners can negatively influence their attitudes and behaviors, degrade classroom group dynamics and teacher’s motivation, and result in long-term and widespread negative learning outcomes. At the same time, teachers could overcome difficulties in students’ management by knowing the affective states of their students (Hwang & Yang, 2009). Our main scope is to address these problems by providing an authoring tool for medicine that constructs animated medical agents with emotional interaction capabilities, thus rendering human–computer interaction for e-learning more human-like. Medical instructors may use this authoring tool to create their own educational characters that will interact with their students in the medical e-learning environment. Agents may be parameterized in many aspects, the way they speak, the pitch, speed and volume of their voice, their body-language, their facial expressions and the content of their messages. Additionally, for educational purposes, agents may express specific emotional states and this capability is based on the incorporation of the OCC (Ortony, Clore, & Collins, 1990) cognitive model of emotions, proposed by Ortony et al. (1990). The novel system that we developed encapsulates an affective authoring module that relies on the OCC theory for modeling possible emotional states of users–students as well as for proposing tactics to medical instructors in order to improve the interaction between tutoring agents and medical students. Through the incorporation of the OCC model, the system may suggest that a tutoring agent should express a specific emotional state to the medical student for the purpose of motivating her/him while s/he learns. Consequently, the agent may become a more effective teacher, reflecting the instructors’ vision of teaching behavior. In many cases it would be extremely useful to have such facilities in handheld devices, such as mobile phones rather than desktop or portable computers so that additional assets may be gained. Such assets include device independence as well as more independence with respect to time and place in comparison with web-based education using standard PCs. This is certainly the case for medical education due to the heavily loaded schedule of doctors–instructors and medical students. At the current state, there are not many mature mobile authoring systems, since the technology of mobile computing is quite recent and has not yet been used to the extent that it could. The resulting educational system, Mobile Medical Tutor (MMT) deals with the problem of facilitating the medical instructor in the educational software management. Moreover, MMT makes use of the desktop application, which is designed in a way that can support the emotional state of learners for educational purposes, based on a cognitive model (Alepis et al., 2008, Virvou and Alepis, 2003a and Virvou and Alepis, 2003b). Many researchers believe that the future of e-learning in medical education will move towards more personalized learning supported by a range of new technologies (Larvin, 2009 and Sandars and Haythornthwaite, 2007).

In this paper we have described an affective mobile educational system that incorporates mobile technology in order to assist medical instructors and students with many learning and training obligations. The authoring tool provides an important facility to medical instructors for the creation of their own affective tutoring characters, who can respond emotionally to medical students during their interaction. Based on each student’s interaction, goals, achievements and mistakes and the OCC theory for modeling the cognitive structure of human emotional states, the system proposes specific emotional states for the tutoring agent as tactics in supporting the educational process. In this way, the tutoring characters that are speaking, animated agents may represent the teaching behavior of the human medical instructor who is in charge of the remote lessons. Medical students, who are going to use the educational applications, will have a user interface that is more human-like and affective. Thus they may feel less deprived of the absence of human instructors in medical e-learning. As a next step we are planning to combine our system with face detection and facial expression analysis modules, developed in Virvou, Tsihrintzis, Alepis, Stathopoulou, and Kabassi (2007) and Tsihrintzis, Virvou, and Alepis (2008) by our research group, that address the problem of emotion perception of users through their facial images. In this way, adaptivity in the affective educational system is going to improve and the resulting application is expected to become more user-friendly and attractive.