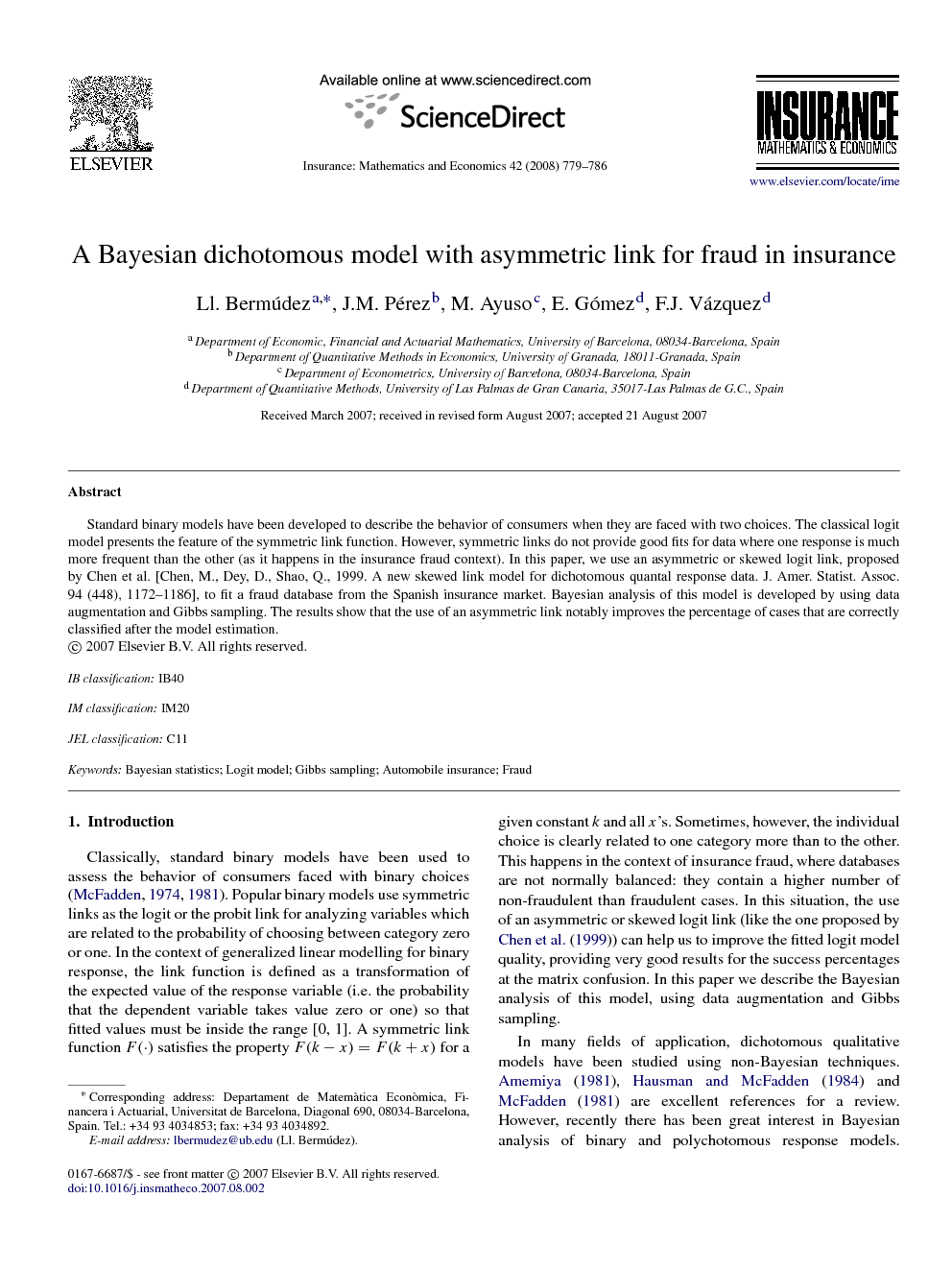 Standard binary models have been developed to describe the behavior of consumers when they are faced with two choices. The classical logit model presents the feature of the symmetric link function. However, symmetric links do not provide good fits for data where one response is much more frequent than the other (as it happens in the insurance fraud context). In this paper, we use an asymmetric or skewed logit link, proposed by Chen et al. [Chen, M., Dey, D., Shao, Q., 1999. A new skewed link model for dichotomous quantal response data. J. Amer. Statist. Assoc. 94 (448), 1172–1186], to fit a fraud database from the Spanish insurance market. Bayesian analysis of this model is developed by using data augmentation and Gibbs sampling. The results show that the use of an asymmetric link notably improves the percentage of cases that are correctly classified after the model estimation.

Classically, standard binary models have been used to assess the behavior of consumers faced with binary choices (McFadden, 1974 and McFadden, 1981). Popular binary models use symmetric links as the logit or the probit link for analyzing variables which are related to the probability of choosing between category zero or one. In the context of generalized linear modelling for binary response, the link function is defined as a transformation of the expected value of the response variable (i.e. the probability that the dependent variable takes value zero or one) so that fitted values must be inside the range [0, 1]. A symmetric link function F(⋅)F(⋅) satisfies the property F(k−x)=F(k+x)F(k−x)=F(k+x) for a given constant kk and all xx’s. Sometimes, however, the individual choice is clearly related to one category more than to the other. This happens in the context of insurance fraud, where databases are not normally balanced: they contain a higher number of non-fraudulent than fraudulent cases. In this situation, the use of an asymmetric or skewed logit link (like the one proposed by Chen et al. (1999)) can help us to improve the fitted logit model quality, providing very good results for the success percentages at the matrix confusion. In this paper we describe the Bayesian analysis of this model, using data augmentation and Gibbs sampling. In many fields of application, dichotomous qualitative models have been studied using non-Bayesian techniques. Amemiya (1981), Hausman and McFadden (1984) and McFadden (1981) are excellent references for a review. However, recently there has been great interest in Bayesian analysis of binary and polychotomous response models. McCulloch et al. (1999), Albert and Chib (1993), Koop and Poirier (1993), Stukel (1988), Basu and Mukhopadhayay (2000) and Bazán et al. (2006), among others, provide good examples of this approach. In the area of insurance, Artís et al. (1999), Artís et al. (2002), Belhadji and Dionne (1997), Belhadji et al. (2000) and Caudill et al. (2005) estimated discrete choice models for fraud behavior from a non-Bayesian point of view. However, very little has been said in the literature (Viaene et al., 2002; Viaene et al., 2007) about the Bayesian analysis of fraud behavior in the automobile insurance market. An insurance portfolio is a collection of NN individuals or contracts where a binary random variable yiyi is observed for the policyholder ii, i=1,…,Ni=1,…,N. In this case, yiyi equals one if the iith individual admits a fraud claim, and zero otherwise. It is obvious that yiyi follows a Bernoulli distribution where yi=1yi=1 with probability pipi, and yi=0yi=0 with probability 1−pi1−pi. Thus, E(yi)=piE(yi)=pi, and View the MathML sourceVar(yi)=pi(1−pi). Let View the MathML sourcey=(y1,…,yn)′ be a sample of n≤Nn≤N observations and View the MathML sourcel(y)=∏i=1npiyi(1−pi)1−yi, be the the likelihood function. In the dichotomous response models, View the MathML sourcepi=F(xi′β), where View the MathML sourcexi=(xi1,…,xik)′ is a k×1k×1 vector of covariates, and View the MathML sourceβ=(β1,…,βk)′ is a k×1k×1 vector of regression coefficients. The likelihood function can be written as: equation(1) View the MathML sourcel(y)=∏i=1n[F(xi′β)]yi[1−F(xi′β)]1−yi. Turn MathJax on Two special, well-known cases assume that the link function F−1(⋅)F−1(⋅) is the inverse of the standard normal cumulative distribution function (probit model), or the inverse of the standard logistic cumulative distribution function (logit model). The main advantage of the logit model over the probit one is that it makes the interpretation of coefficients much easier. Although probit models are clearly appealing due to the relative ease of their computation and the modelling of the covariance structure, they present some problems with the parameter interpretation. In this paper we focus on the logit model but using an asymmetric link, from a Bayesian point of view. In previous works on insurance fraud (Artís et al., 1999, Artís et al., 2002 and Belhadji and Dionne, 1997), based on the use of symmetric links, the discrete model was estimated by maximizing a weighted likelihood function. Weights were included in the estimation procedure in order to account for the effect of the fraud over-representation in the samples used. In other studies such as Belhadji et al. (2000) or Pinquet et al. (2007) the authors set the probability threshold for the fraud claim classification according to the observed fraud detection rate in the portfolios used (which are representative of the total population). In this study, we use a Bayesian skewed logit model (Chen et al., 1999) for fitting an insurance fraud database. This model incorporates the possibility of using asymmetric links in order to measure the probability of yi=0yi=0 and yi=1yi=1 in non-balanced samples (with a high proportion of zeros or ones). Firstly, we quantify the prior distribution for each of the parameters and for the skewness parameter. Secondly, we use the Bayes’ theorem to calculate posterior model probabilities. In the empirical section of the paper, we observe a notable improvement for the regression fit results when the asymmetric Bayesian approach is used compared with those obtained with the classical logit model or the symmetric Bayesian model (which gives results similar to those of the classical model). The rest of the paper is structured as follows. In Section 2, we present the Bayesian procedures for analyzing the new skewed logit model. Section 3 is devoted to the prior elicitation. In Sections 4 and 5, we present the data and results from an application of the proposed model to the Spanish automobile insurance fraud database. Finally in Section 6, we show the main conclusions and suggestions for future research related to this study.

In this paper, we introduced a simulation-based approach by applying a Monte Carlo Bayesian Gibbs sampling for fitting an insurance fraud database using a dichotomous model. Our approach identifies the likelihood of the data by using an asymmetric logit model, and then assuming a proper prior distribution of the parameters of the model. These considerations, combined with the Gibbs sampler, allow us to simulate on the basis of the exact posterior distribution of these parameters. Comparing the standard and the Bayesian logit (with symmetric links) estimation results, we see that the Bayes logistic model gives posterior estimations for the coefficients that are quite similar to the classical ones. A logistic model with classical inference gives almost the same estimations as a Bayesian inference with non-informative normal priors. However, the Bayesian methodology is unable to signal the significance of the parameter associated to the variable proxim, as we have commented in Section 5.1. Moreover, both models present a lack of fit due to the incorrect classification of zero cases (see Table 5). A large difference can be observed in the confusion matrix (see Table 7) when we consider a Bayesian skewed logit model, which is more suitable for fitting data than a classical logistic model if the zero response is observed more often than the one response. Still a non-significant parameter for proxim has been found. Finally, the Bayesian procedure presents standard errors for the parameters slightly higher than those obtained with the classical logit. These conclusions are analyzed in the context of insurance fraud, where poor classification of honest and fraudulent claims implies high auditing costs for the insurance company. The auditing cost related to honest claims incorrectly classified as fraud will be notably reduced with the application of a skewed logit model. Since the Bayesian skewed logit model presented here is only used for fitting purposes, it is necessary to search for an asymmetric link function which would model the insurance fraud database so that the best predictive model would be obtained. In this way, we have already used the most common asymmetric link functions (log–log and complementary log–log), but we have not found a relevant improvement in terms of predicting or classification performance. Therefore, a natural extension of this paper is looking for skewed link functions which help us to obtain better predictions. Another interesting extension of the study is the application of our results to a multinomial logit model, where multiple responses are possible (Holmes and Held, 2006 and Bazán et al., 2006). The multinomial logit model has been previously used in modelling automobile insurance fraud behavior (Artís et al., 1999), but not from a Bayesian point of view.