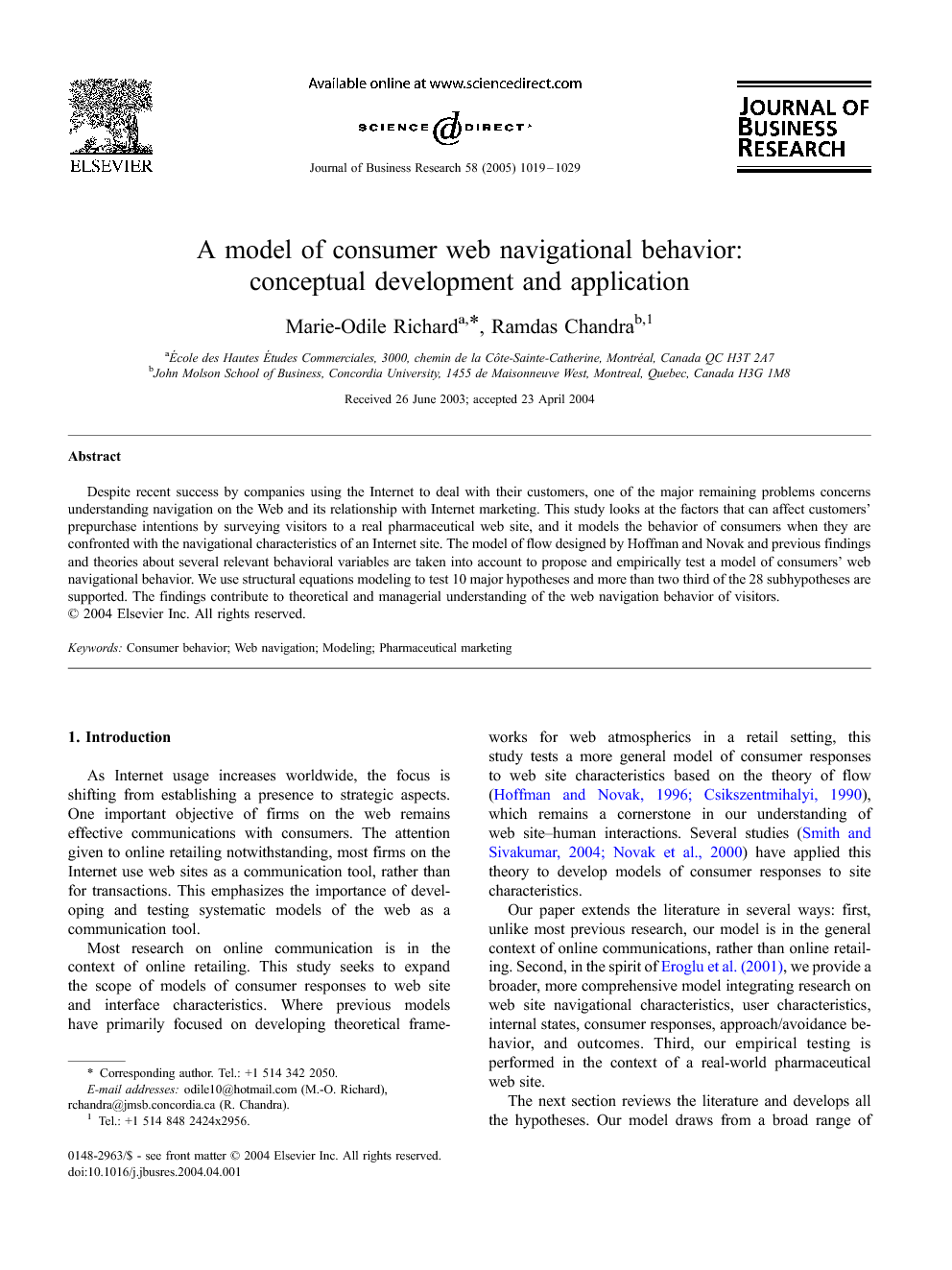 Despite recent success by companies using the Internet to deal with their customers, one of the major remaining problems concerns understanding navigation on the Web and its relationship with Internet marketing. This study looks at the factors that can affect customers' prepurchase intentions by surveying visitors to a real pharmaceutical web site, and it models the behavior of consumers when they are confronted with the navigational characteristics of an Internet site. The model of flow designed by Hoffman and Novak and previous findings and theories about several relevant behavioral variables are taken into account to propose and empirically test a model of consumers' web navigational behavior. We use structural equations modeling to test 10 major hypotheses and more than two third of the 28 subhypotheses are supported. The findings contribute to theoretical and managerial understanding of the web navigation behavior of visitors.

As Internet usage increases worldwide, the focus is shifting from establishing a presence to strategic aspects. One important objective of firms on the web remains effective communications with consumers. The attention given to online retailing notwithstanding, most firms on the Internet use web sites as a communication tool, rather than for transactions. This emphasizes the importance of developing and testing systematic models of the web as a communication tool. Most research on online communication is in the context of online retailing. This study seeks to expand the scope of models of consumer responses to web site and interface characteristics. Where previous models have primarily focused on developing theoretical frameworks for web atmospherics in a retail setting, this study tests a more general model of consumer responses to web site characteristics based on the theory of flow (Hoffman and Novak, 1996 and Csikszentmihalyi, 1990), which remains a cornerstone in our understanding of web site–human interactions. Several studies (Smith and Sivakumar, 2004 and Novak et al., 2000) have applied this theory to develop models of consumer responses to site characteristics. Our paper extends the literature in several ways: first, unlike most previous research, our model is in the general context of online communications, rather than online retailing. Second, in the spirit of Eroglu et al. (2001), we provide a broader, more comprehensive model integrating research on web site navigational characteristics, user characteristics, internal states, consumer responses, approach/avoidance behavior, and outcomes. Third, our empirical testing is performed in the context of a real-world pharmaceutical web site. The next section reviews the literature and develops all the hypotheses. Our model draws from a broad range of literature, to which it would be impossible to do justice. Therefore, it is necessarily a brief review highlighting the most relevant literature. The following section describes the empirical approach and the data used. We conclude with discussions of the findings and implications.