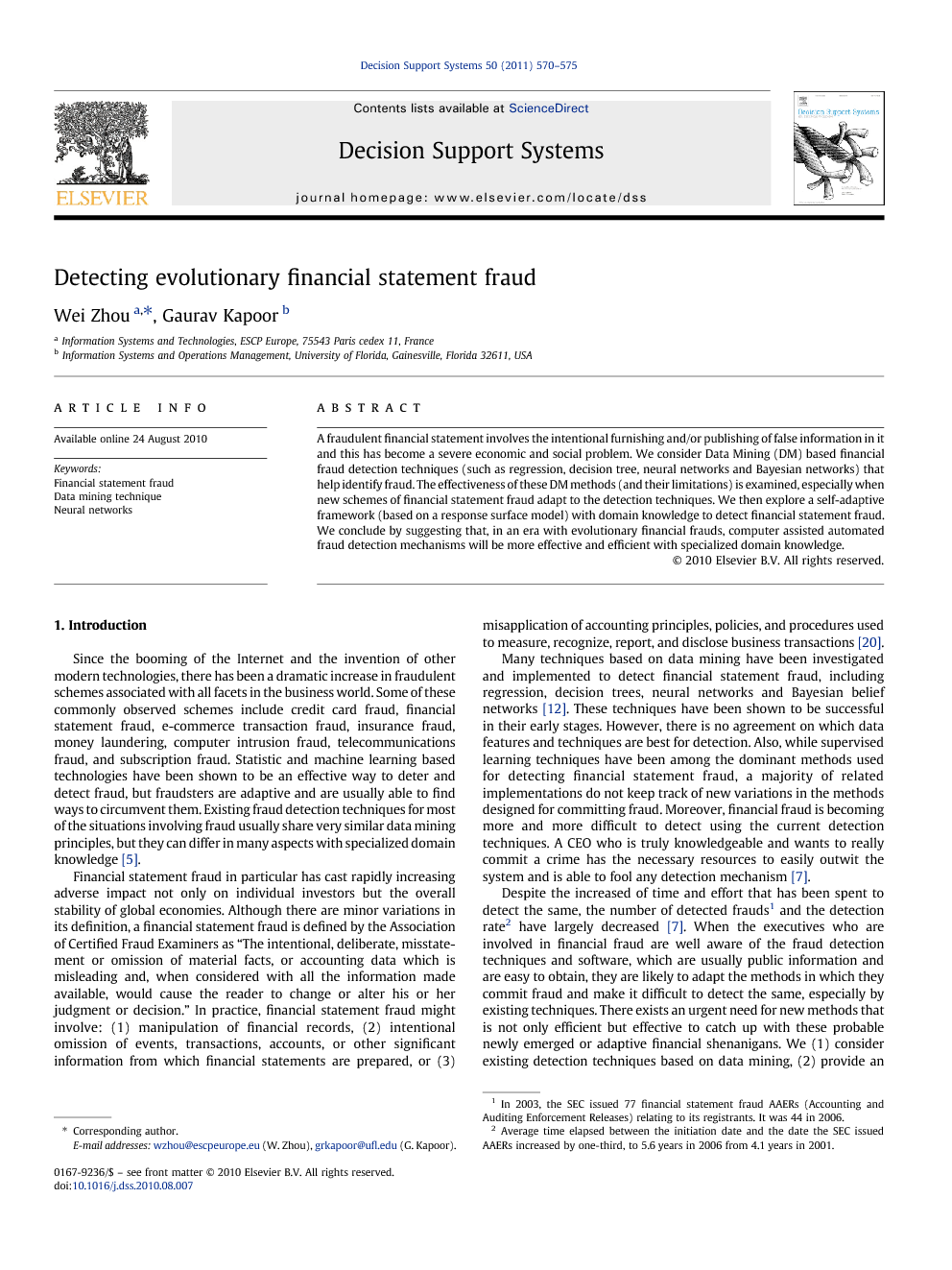 A fraudulent financial statement involves the intentional furnishing and/or publishing of false information in it and this has become a severe economic and social problem. We consider Data Mining (DM) based financial fraud detection techniques (such as regression, decision tree, neural networks and Bayesian networks) that help identify fraud. The effectiveness of these DM methods (and their limitations) is examined, especially when new schemes of financial statement fraud adapt to the detection techniques. We then explore a self-adaptive framework (based on a response surface model) with domain knowledge to detect financial statement fraud. We conclude by suggesting that, in an era with evolutionary financial frauds, computer assisted automated fraud detection mechanisms will be more effective and efficient with specialized domain knowledge.

Since the booming of the Internet and the invention of other modern technologies, there has been a dramatic increase in fraudulent schemes associated with all facets in the business world. Some of these commonly observed schemes include credit card fraud, financial statement fraud, e-commerce transaction fraud, insurance fraud, money laundering, computer intrusion fraud, telecommunications fraud, and subscription fraud. Statistic and machine learning based technologies have been shown to be an effective way to deter and detect fraud, but fraudsters are adaptive and are usually able to find ways to circumvent them. Existing fraud detection techniques for most of the situations involving fraud usually share very similar data mining principles, but they can differ in many aspects with specialized domain knowledge [5]. Financial statement fraud in particular has cast rapidly increasing adverse impact not only on individual investors but the overall stability of global economies. Although there are minor variations in its definition, a financial statement fraud is defined by the Association of Certified Fraud Examiners as “The intentional, deliberate, misstatement or omission of material facts, or accounting data which is misleading and, when considered with all the information made available, would cause the reader to change or alter his or her judgment or decision.” In practice, financial statement fraud might involve: (1) manipulation of financial records, (2) intentional omission of events, transactions, accounts, or other significant information from which financial statements are prepared, or (3) misapplication of accounting principles, policies, and procedures used to measure, recognize, report, and disclose business transactions [20]. Many techniques based on data mining have been investigated and implemented to detect financial statement fraud, including regression, decision trees, neural networks and Bayesian belief networks [12]. These techniques have been shown to be successful in their early stages. However, there is no agreement on which data features and techniques are best for detection. Also, while supervised learning techniques have been among the dominant methods used for detecting financial statement fraud, a majority of related implementations do not keep track of new variations in the methods designed for committing fraud. Moreover, financial fraud is becoming more and more difficult to detect using the current detection techniques. A CEO who is truly knowledgeable and wants to really commit a crime has the necessary resources to easily outwit the system and is able to fool any detection mechanism [7]. Despite the increased of time and effort that has been spent to detect the same, the number of detected frauds1 and the detection rate2 have largely decreased [7]. When the executives who are involved in financial fraud are well aware of the fraud detection techniques and software, which are usually public information and are easy to obtain, they are likely to adapt the methods in which they commit fraud and make it difficult to detect the same, especially by existing techniques. There exists an urgent need for new methods that is not only efficient but effective to catch up with these probable newly emerged or adaptive financial shenanigans. We (1) consider existing detection techniques based on data mining, (2) provide an overview of existing financial shenanigans and their trend, and (3) suggest a new framework to detect evolutionary financial statement fraud. The remainder of this paper is organized as follows. We review the application of regression, decision trees, neural networks and Bayesian belief networks in financial statement fraud detection in the next section. We survey the history and trend of contemporary financial fraud in Section 3. We analyze the effectiveness and limitation of existing fraud detection technologies in 4 and 5 and then suggest a framework that addresses the problem when emerging financial fraud is evolutionary. Section 6 concludes the paper with a brief discussion on the insights garnered and possible future research.

In recent years, data mining has gained widespread attention and increasing popularity in the financial world. Successful data mining applications have been reported and recent surveys have found that data mining has grown in usage and effectiveness. Professional accounting bodies have also identified data mining as an important technology for the new century. Implementing straightforward data mining techniques to discover financial statement fraud, however, has many disadvantages and limits of usage. After exhaustive literature review, we find that a majority of existing data mining techniques to detect financial fraud have their domain of usage and limitations. Furthermore, when financial statement fraudsters have found ways to circumvent the automatic detection programs, there is an urgent need for a mechanism that is able to learn and use the industrial domain knowledge to facilitate the data mining techniques. We propose such a framework that is based on the response surface method to automatically pivot the program in accordance with the unique circumstances of the firm in question. Unlike traditional financial fraud detection techniques that are based on historical financial data, we further propose an innovative way, the active discovery module that evolves ahead of possible fraudsters. Preparing the intelligent detection system in anticipation before any unknown or future fraud happens enables us to effectively detect financial statement frauds that adapt. Future research is needed to design the active discovery module that is both effective and efficient. Furthermore, although we have suggested the response surface method to extract the domain knowledge and to adaptively learn the changes from fraudsters, there may exist alternatives that have equal or better performance than the RSM. Research is also needed to examine the circumstances under which our suggested framework performs better than other techniques.