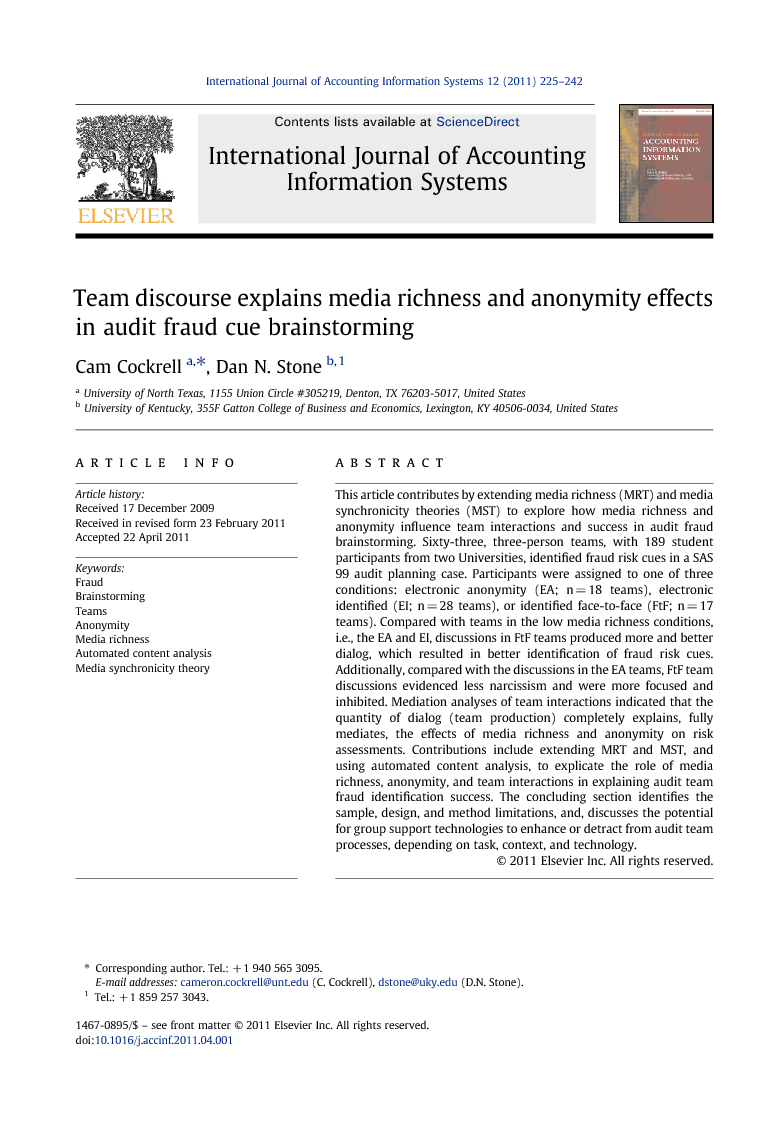 Detecting fraudulent financial reporting is among the external auditor's most critical and difficult responsibilities (Louwers, 2011, Wells, 1997, Wells, 2004 and Wells, 2005). Recent research describes the processes used by audit firms to conduct audit fraud brainstorming (Bellovary and Johnstone, 2007 and Brazel and Carpenter, 2010), explores the conditions in which individual auditors and audit teams successfully detect fraudulent financial reporting (e.g., Carpenter, 2007), and investigates the influence of technology on the detection of fraudulent reporting (e.g., Hunton and Gold, 2010). This study builds upon, and contributes to, this literature in multiple ways. First, SAS No. 99 – which mandates the use of brainstorming among audit teams – allows discretion in the methods and processes adopted for brainstorming sessions. International standards on auditing (ISA), specifically, International Federation of Accountants (IFAC) ISA 240 (IFAC, 2009a) and ISA 315 (2009b), require early-engagement, audit-team discussion of the possibility of material financial misstatements due to fraud or error. Available technologies increasingly support multiple aspects of audit team deliberations and decision-making (Bamber et al., 1996), thereby aiding team discussions. However, evidence suggests that communication technologies are not yet in common use among audit teams engaged in fraud brainstorming (Bellovary and Johnstone, 2007). In addition, variability in fraud brainstorming processes (Brazel and Carpenter, 2010) and differences in the structure and technology adopted influence team success (Hunton and Gold, 2010 and Lynch and Murthy, 2009). This article investigates conditions – enabled by recent advances in technology – which may improve, or impede, the success of audit team brainstorming. Second, we investigate these issues by extending theories, specifically, media synchronicity theory (MST) and media richness theory (MRT), that have received variable support in previous investigations (e.g., see Kahai and Cooper, 2003). One possible reason for the limited support for MST and MRT may be that much research has investigated these theories with relatively simple tasks that pose hypothetical questions (e.g., “How can we attract tourists to Tucson?”) whose solution does not require professional knowledge (cf. Carpenter, 2007). It is possible that, following the principles of MST and MRT, the beneficial effects of richer media increase with task complexity and task demands. This investigation applies MST and MRT to a complex task, using predictions that are consistent with the original intent and scope of the theory. Third, web-privacy concerns have created an expanding set of products that facilitate web and email anonymity (Tuna, 2010). One possibility – which must be considered in evaluating technologies for adoption by auditors in SAS 99 fraud brainstorming sessions – is whether auditor anonymity improves or impedes brainstorming outcomes (cf. DeZoort and Harrison, 2008a and DeZoort and Harrison, 2008b). This article manipulates, and tests the effects of, anonymity on brainstorming. Fourth, evidence from professional practice suggests that team processes influence brainstorming outcomes (Brazel and Carpenter, 2010). Unfortunately, until recently, the available technologies for investigating team processes were restricted to broad, aggregated metrics such as the time taken for deliberations and individual perceptions of team deliberations. Recent advances in automated content analysis, undertaken in this investigation, enable the detailed analysis of audit team processes. Finally, the detailed examination of team processes facilitates a more precise understanding of why and how team processes influence brainstorming outcomes. Coupling methodological advances in multiple mediation analysis, with detailed analyses of team processes, enables the determination of whether, and how, team processes explain, i.e., mediate, the effects of media richness and anonymity on audit fraud brainstorming success. The reported experiment manipulates two aspects of teams' communication processes. First, interactions in face-to-face (FtF) teams, i.e., using richer media, are compared with interactions among teams in two lower media richness conditions, i.e., electronic communication conditions in which participants are identified (EI) or anonymous (EA). Second, the experiment compares the effects and effectiveness of individual and team anonymity, i.e., teams in the EA condition, with that of the teams in the identified conditions, i.e., the EI and FtF. The investigation proceeds, initially, with a review of recent research investigating audit fraud brainstorming, followed by hypotheses based in, and extending, MST and MRT. Description of the experimental method and results follows, with a concluding section that explores the implications and limitations of the investigation.