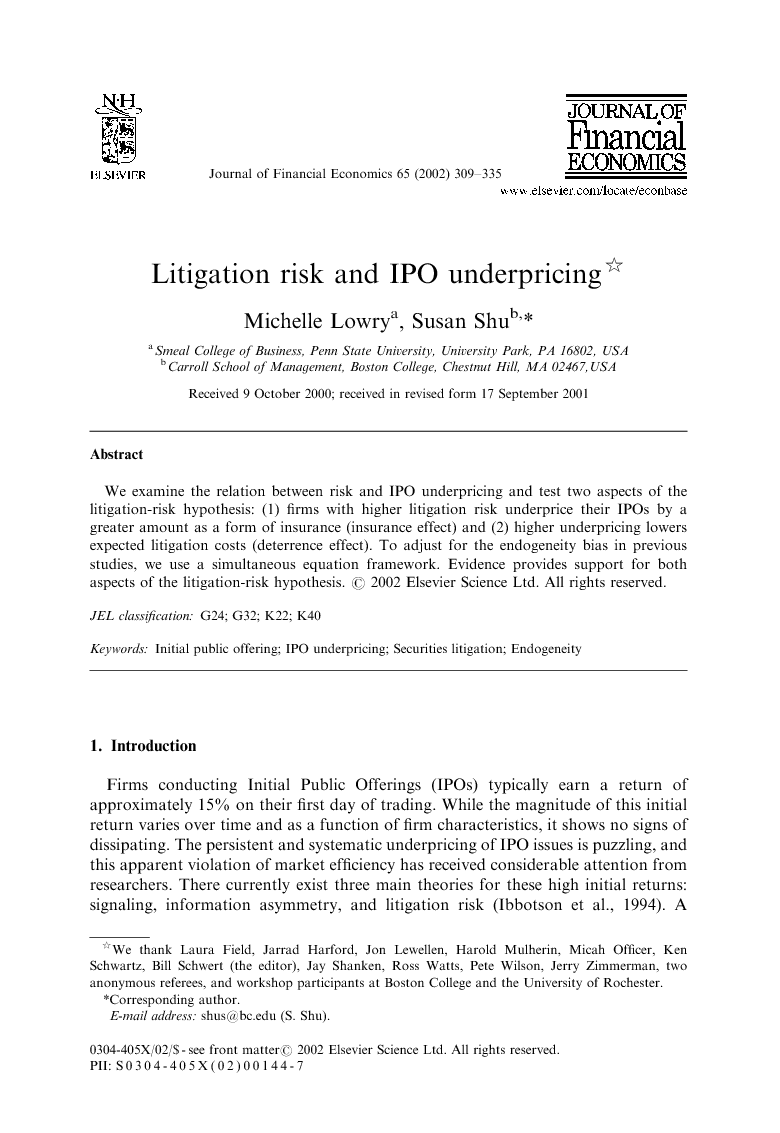 We examine the relation between risk and IPO underpricing and test two aspects of the litigation-risk hypothesis: (1) firms with higher litigation risk underprice their IPOs by a greater amount as a form of insurance (insurance effect) and (2) higher underpricing lowers expected litigation costs (deterrence effect). To adjust for the endogeneity bias in previous studies, we use a simultaneous equation framework. Evidence provides support for both aspects of the litigation-risk hypothesis.

Potential litigation costs are quite significant for firms that have recently gone public. Attorney fees, the costs of management time allocated to the lawsuit, reputation costs, and settlement costs represent an enormous potential liability for a young firm. Unlike most forms of insurance, IPO underpricing is a viable form of insurance against all of these costs because it lowers plaintiffs’ potential recoverable damages, and thus lowers the probability of being sued. This paper investigates the extent to which firms underprice their IPOs as a form of insurance and whether underpricing is effective in deterring litigation. Our examination of the relation between underpricing and litigation risk emphasizes the importance of controlling for endogeneity. For example, results from OLS regressions contradict the insurance effect component of the litigation risk hypothesis. However, this finding is overturned once we jointly model initial returns and litigation risk in a simultaneous equations system. Specifically, we find that firms with higher litigation risk underprice their IPOs by significantly greater amounts. Further, consistent with the deterrence effect of underpricing, there is evidence that firms that engage in more underpricing significantly lower their litigation risks, especially for lawsuits occurring closer to the IPO dates. After controlling for the endogeneity of initial returns and lawsuit probability, we find support for both the insurance and deterrence aspects of the litigation-risk hypothesis. The simultaneous-equation framework used in this study is potentially useful for other settings. Many corporate finance events are similarly endogenous in nature, and researchers’ ability to account for such endogeneity in future studies potentially affects the conclusions that are drawn.